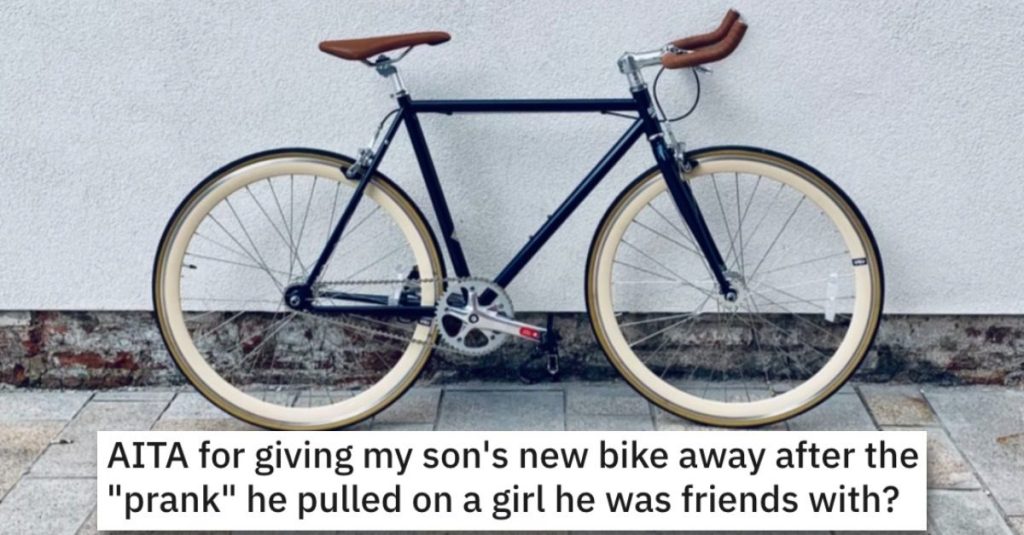 Did you ever do anything bad when you were a kid that caused your mom or dad to give away something that meant a lot to you as punishment?

And this parent wants to know if they’re wrong for giving away their son’s bike because of a prank he pulled.

AITA for giving my son’s new bike away after the “prank” he pulled on a girl he was friends with?

“So recently I found out my son “Jacob” (15) pulled an incredibly cruel “prank” on one of the girls I’ll call “Ashley” that’s in his friend group.

I know this girl, she’s been to our house and even attended Jacob’s birthday party a month ago. She seemed incredibly sweet if not a bit shy. So when my oldest son “Mark” (17) came to me and told me Jacob had asked Ashley out on a date as a prank I was stunned.

I of course asked how he could know this, hoping as any mother would that it wasn’t true. But Mark showed me the family tablet we all use (but mostly my sons do) and it seems Jacob forgot to log out of his chatting app, discord.

I read the long series of messages between Jacob and his friends as they mocked Ashley all through this heartless prank. I was speechless. And that’s not even getting into HOW he was talking, like he was some thug and not a 15 year old living in a gated community.

At first I couldn’t figure out what to do, or how to proceed. I’ll admit that I never once imagined either of my boys would be the type of person to do something like that. But there was no way in hell I was letting this go. So after a day of thought I decided what was going to happen.

First things first, he was grounded, for how long I’m not sure. Secondly, I’d gotten Jacob a bike for his birthday but it hadn’t arrived until the day previous and I’d planned to give it to him when my parents came to visit since they’d been unable to make his party.

But instead of that I showed him I knew about the “prank” and told him he was grounded, then I made him carry the new bike out of my bedroom closet and to the car before driving to Ashley’s house, him crying the whole way. I’d called her parents earlier and explained everything and so once we got there I had him cart it to their front porch and ring the bell.

Then in front of me, Ashley, her parents, and God I had him give a sincere apology and gift her the bike. Even I apologized to her, saying I didn’t raise my boy this way and what he did was unforgivable. I also called the parents of the other boys who were apart of this little stunt and they all seemed rightfully horrified by their sons’ involvement.

I felt I’d handled this all as best as I could, and my friends agreed. Though once my parents found out that I’d made Jacob give his birthday gift away they said what I did went too far. I still feel like what I did was right but having my parents more or less dog pile on me like this actually made me wonder if how I handled it was too extreme?

One person said this parent is NTA and that they did the right thing. 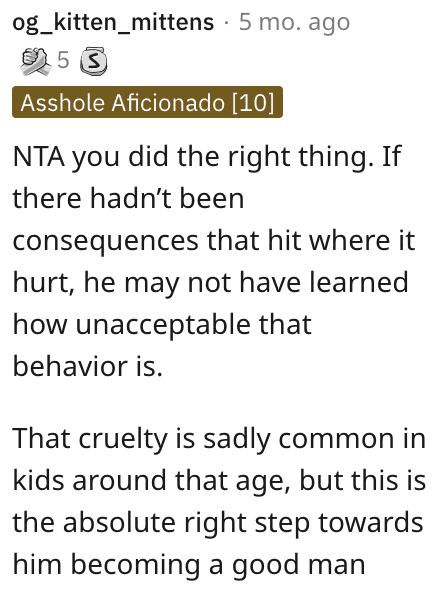 Another Reddit user who went through something like this said it was good for this parent to stand up and do the right thing.

And this individual said they should also have an overall conversation with their son about how to treat and speak to women.