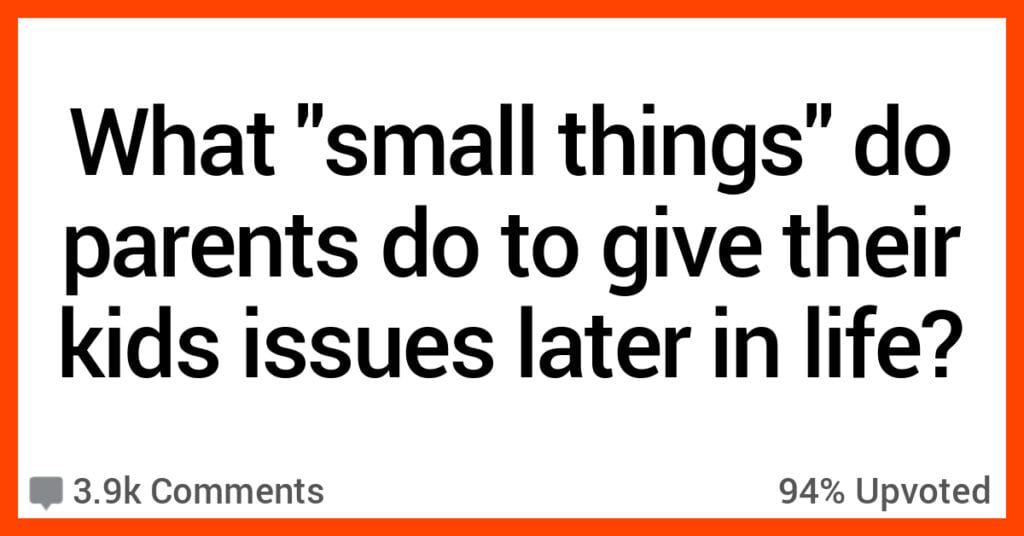 I always feel very sorry for people who were raised by parents who, let’s face it, didn’t have a whole lot of business being parents in the first place.

No one has any control over who their parents are and sometimes people just get stuck with moms and dads who really mess them up from a young age.

AskReddit users talked about the small things that moms and dads do that ended up giving their kids mental health issues later in life.

No matter what your kid tells you, keep it cool.

Otherwise they will be WAY less likely to come to you with problems.”

Not allowing ‘negative’ emotions like anger, jealousy, etc. Teach them those are normal, and what to do with your emotions.

Pressure to perform. Don’t try and make your kids something they’re not, especially if it’s what you wished you were.

Never letting them find the consequences of their mistakes. You might want to protect them, but you’re stopping them from learning how to avoid mistakes, and how to recover from them, and how to deal if other people make mistakes.

Not dealing with and owning your own sh*t. We’ve all got problems, best to deal with it rather than perpetuate cycles. Find a therapist for yourself, and be open with your kid that you know, and you’re trying your best. It gives them space to learn grace and how to deal with their issues.”

“Don’t expect your kid to kiss the ground you walk on and see you as a god for providing food, clothes, and a roof. That’s literally the bare minimum required by law.

Don’t drill into their heads they owe you gratitude for giving them life. They didn’t have a choice in that matter.

Don’t treat them like a burden. Again it was your choice to have a child. Shouldn’t have become a parent if you couldn’t handle the responsibility

Don’t make your love conditional, only to be given when you deign it so. Not only is that cruel but it sets them up for failure in future relationships.”

Not setting good boundaries or defining parent-child roles. There are a lot of parents who unintentionally reverse roles like confiding to their child about their adult problems or seeking too much comfort from their child. It can create a sense of responsibility within the child to take care of their parent and can lead to codependency and lack of boundaries in other relationships.

Also…for the love of God… don’t hit your kids, including spanking. At best it “doesn’t hurt” them. It is not supported in any research that it benefits your child. At worst it leads to a whole host of difficulties…including violence approval.”

“Making comments likes ‘wow, you got some chubs there bouncing on the trampoline’ to a 9 yo.

F*cking gave me an eating disorder and still dealing with body image issues.”

Parents often say, “want something to cry about?”

And it may teach their kid that it’s bad to cry, and that bottling up emotions is good.”

“My parents used to confide in me about things that were far above my emotional capacity at my age, and to them it may have seemed small, but it made me feel like I needed to take care of them and solve their issues when I was small.

They also seemed to pride themselves on never fighting in front of us, but because of that small thing we never learned how to peacefully resolve conflict or that disagreeing with someone isn’t something to be afraid of.”

“Being inconsistent. Punished for something one time and the same behavior ignored another time.

Pay more attention to something else than the child… phone, boyfriend, girlfriend, etc.

Overreacting to small things, under react to big things.

One thing to do – be present and be loving. Discipline is a form of love. Punishment is not.”

“Telling little girls that are being bullied by boys “…it means they like you so be sweet and quiet and you might get a boyfriend.””

“Telling your child what they feel.

As a kid, your inclination is to believe them. It wasn’t until I was in my thirties that I realized that my mother had been doing this my whole life.

For the most part, it wasn’t much of an issue, but when it was…

One day it lit up in my brain while she was talking, and I asked her to stop telling me what I was thinking because it was interfering with my ACTUAL thoughts. She’d been telling me what a nervous driver I am, so of course I can’t do x and y and I have to blah blah. I realized that most of my “nervous driving” was me thinking “mom says I’m a nervous driver” not my actual nerves.

This was more of an adult example, but she’s done this my whole life. “You don’t like x, so I made sure to not have any in the house,” or “you like y, so I thought you’d like to be included in this day of activities,” whatever it is, it’s been mom telling me what I like or don’t like.

Meanwhile, she can’t remember her left from her right, and tends to think that something I liked ten years ago must still be my favorite. It’s undermining, disrespectful, and infantilizing. It trivializes my reality, and makes it difficult to form my own opinions.

I know all of this from experiencing it as a kid.”

“I believe I was a child who had issues growing up:

I had a narcissistic, fiery tempered dad. I’ve had a glass ashtray amongst other objects thrown at my face. Had an object struck 2mm away from my pupil, causing my eyes to bleed… Regularly thrown out of the house together with my clothes at 2am till the neighbours came out. Caning until my skin bled is the norm. All this happened before I reached the age of 12.

But what really tore me apart was everyday, he would go out of his way to let me know that I’m a useless human and I shouldn’t be on earth anymore. I took his advise and secretly tried to poison myself a couple of times.

My parents doesn’t know about it till today. I grew up having no regards for my own life. I figured that since my life is useless, I might as well trade mine for someone else’s life. So I became a fireman.

But seeing all the depressing things that a fireman regularly sees is life-changing. I learned to recognize love and value of life.”

“I was young when my parents began confiding in me about their marriage.

They didn’t mean any harm – they were just venting – but it really made me uncomfortable messed with my head.”