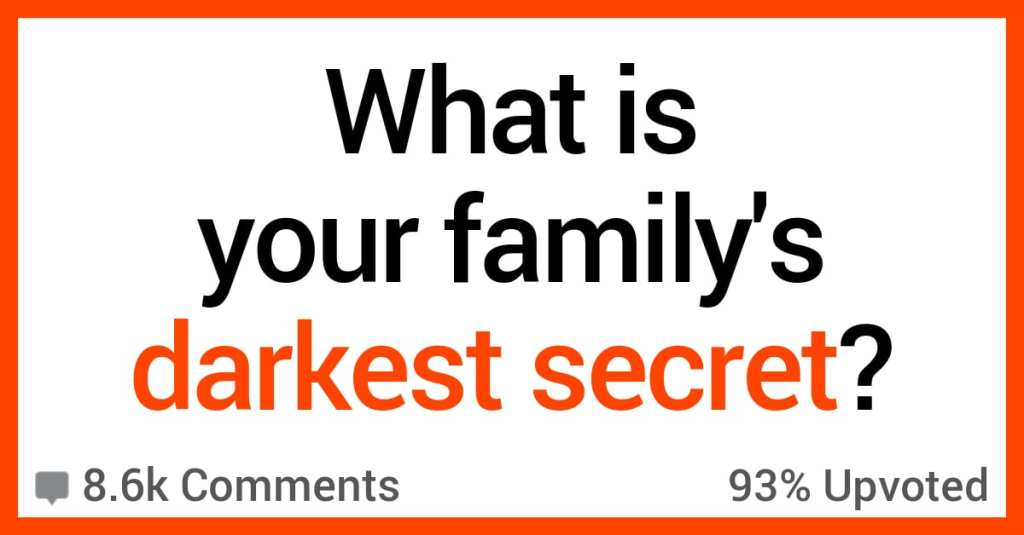 People Opened up About Their Darkest Family Secrets

Every family dynamic is different, but there’s one thing that seems to be commonplace across all family units: SECRETS.

Secrets that no one is supposed to talk about and ones that they’re not supposed to ever tell other people.

Are you ready to hear some interesting stories?

AskReddit users opened up and talked about the darkest secrets in their families.

“My Uncle is currently in a ‘relationship’ with a famous Japanese p*rn star.

Oh, and then there’s the time we found a body in the wall of my Grandparent’s house while we were trying to figure out where a leak was coming from. Turns out my great-grandfather killed five people.

Never knew why. Still freaks me out.”

It was never talked about in his family. I finally found out all about for him.”

“My mother was sent to an unwed mothers home to have her first child. In Australia this was very common place even as late as the 1970s.

This is referred to as Forced Adoption as the mother never had a chance to even try to keep their child. It was common practice for families to send their pregnant unwed daughters to these places to complete their pregnancy and give the child away without “the neighbours knowing”.

On top of that she has since found out through ancestry DNA that her father wasn’t her father and her mother was pregnant with her to another man before her parents were married. Talk about hypocrisy.”

“While visiting my mother’s native country back in 2004, I would hear someone whimpering/crying every night when it was time for bed. I would mention it to her and she thought I was crazy.

Turns out there was a room between where my aunt’s house and the neighbors are where they housed young girls for s*x trafficking.

My aunt “had” no clue this was going on, but she was always caught up in some weird sh*t. No one wants to believe my aunt was part of it, but it was just really weird.”

“My great grandfather was an alcoholic and drank beer daily while driving to and from work.

One day, he was on a gravel road and hit a little girl. She passed away and one of his friends took the blame.

I’m not sure why the friend took responsibility but apparently, my great grandfather wasn’t the same after that. He quit drinking and changed his ways.”

“My step-great grandfather r*ped everyone in the family. All of the kids, male or female.

Everyone pretends my great grandmother was a saint, but she gifted the kids to him and pretended not to hear them scream for her.”

“I had an uncle who hijacked a plane to Cuba, became a Soviet spy, escaped from prison, and lived under a stolen identity.

We don’t talk about him.”

“My grandpa was an engineer who worked on the atom bomb and some missiles in New Mexico. He also designed safety mechanisms on some guns.

My family’s a bunch of pacifist vegans and my parents met at an anti-bomb rally, so this fact is generally not spoken of.”

“My great grandfather was not only in the Nazi party, he was in the SS.

He was killed in the war and my grandfather was adopted since his whole family was ripped apart.”

“One of my great great uncles beat his wife to death because she cooked a roast wrong.

He was so hated in the community that when he was sentenced to death, over a thousand people flocked to the town to watch him hang.”

“The cat’s out of the bag now but for 10 years my younger sister thought our dad was just away on a business trip.

He was in federal prison.

“My older sister let her baby drown in the bathtub because she knew he has wasn’t mentally “all there” as she called it and couldn’t handle it.

She swore up and down to police that it was an accident and she only left the room for a second.

Was never charged with anything and was ruled a tragic accident. I still have never forgiven her and never will.”

“Back in the 1960s, my grandmother shot and killed my grandfather with a shotgun, in front of their 16 year old daughter (my aunt).

Apparently grandmother felt she was in a bad situation, grandfather was 32 years older than her (she was his secretary before they were married) and their marriage had been very unhappy.

So she cleared it ahead of time with the small town sheriff’s office, put my aunt in the room as a witness, and blew a hole in his chest. Never faced any legal consequences.

My mom (who was only 5 at the time) found out a few years later from a nosy neighbor.”

Does your family have any big secrets that most people don’t know about?

If so, please talk to us in the comments. We’d love to hear from you!