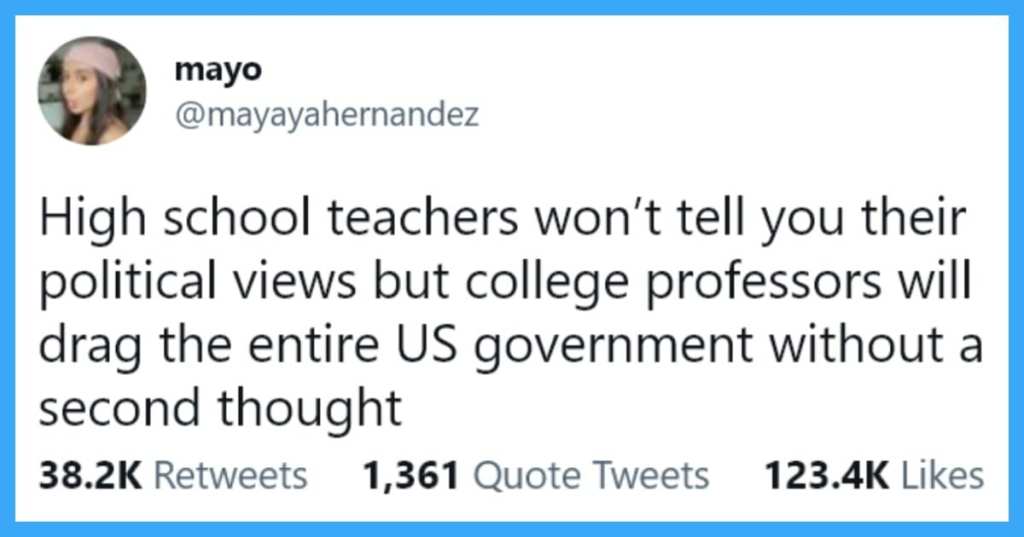 Turned out, all of that was wrong.

My high school was academically WAY more rigorous than my college, no one ever for the rest of my life cared about my GPA, and despite graduating with honors I managed not to be successful.

So take THAT, high school.

They’ve been in my pocket for a while but I think they’re still good.

Middle school: "They won't tolerate this in high school."
HS: "This won't work in college."
College professor: "y'all want some milkduds?"

In HS you’re just learning the basics of how it’s SUPPOSED to work, in college you learn the horrors of how it actually does.

When you’re in college, you’re literally going into debt to be in that class.
If you wanna slack off, that’s on you, they don’t care.

Why did high school teachers always make college professors sound so strict & scary when in reality they’re like, “What’s up, you can call me Andy, I illegally downloaded the text book if you need it & I also have a gambling problem.” Lmfaooo

And snapping while driving, which is neat.

Highschool teachers: College is no joke! Your professors are going to be way more strict!

High school teachers: “Your professors in college won’t put up with that”

We’re traveling back in time!

High school: "we're only being this strict to prepare you for college"
College: *professor comes to class on Halloween in dinosaur costume*

PS. if this might kill you, maybe take precautions.

High school teachers: your college professors won’t be nearly as laid back as I am

I mean, I guess in a certain way they kind of ARE?

When high school teachers kept telling me college professors would be so much worse pic.twitter.com/8cxolTXCst

High school teachers: your college professors are NOT going to put up with this

College professors: who wants to race in the parking lot pic.twitter.com/d00OknhwBX

Who was the best or worst college professor you ever had?