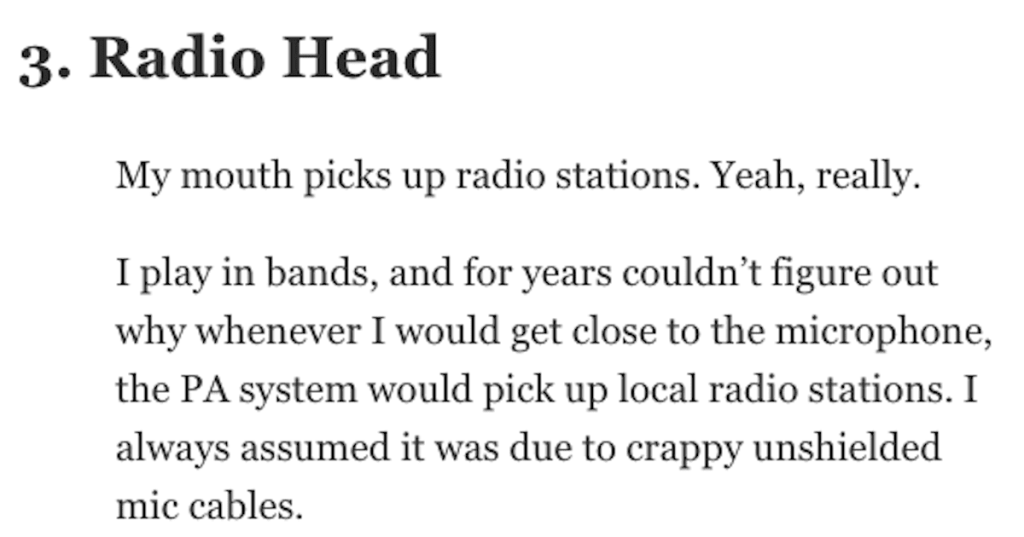 People Reveal the Utterly Unique Things They Own

Hanging on my wall to the right of me right now in my office, among other assorted nonsense, is a certificate officially deeming me the winner of a novelty Christmas song writing competition I got at a bar/theatre in Chicago.

It’s just a bit of fun, but it’s one of those things you kind of treasure just because you know nobody else really has one.

What is something you have, that your pretty sure no one else has? from AskReddit

Granted, some of their things might be worth a lot more than my certificate. Let’s have a look, shall we?

The master recording of the Phantom of the Opera (or, part of it, anyway).

My dad was the recording engineer so he had the tape from when they made an album of the show with the original cast.

My grandfather was one of the lead engineers on the Oxcart/Blackbird project for Lockheed. He engineered the pressure lock system for the cabin for high altitude.

I’m in possession of a miniature proof-of-concept he made for the lock!

I play in bands, and for years couldn’t figure out why whenever I would get close to the microphone, the PA system would pick up local radio stations. I always assumed it was due to crappy unshielded mic cables.

Well, I went to the dentist and decided to get my permanent retainer removed. I scheduled an appointment and that night had band practice. I got close to the mic and picked up a radio station.

It occurred to me that my retainer (if you’re unfamiliar, a permanent one is basically just a steel wire glued in your mouth) was slightly bent and conductive.

Sure enough, the next week I got it removed and now I don’t pick up radio stations anymore near microphones. ?

I have a tiny school book from the 1800s and the covers are filled with the writings of a little girl.

I’m trying to track down her descendants to give them this book, because I don’t like having something so valuable and irreplaceable in my possession, but there is no other little book like it.

It is a history book and many of the entries would now be considered racist, especially toward Native Americans, and also this little girl, and likely her children and grandchildren, are long gone.

My mom took me to the Dr when I was 2/3/4- not sure exactly. Early 80s so technology wasn’t the greatest.

I think they did an ultrasound and kept bringing in doctors and nurses to look at it. Of course they didn’t tell my mom anything right away.

I had had a lot of bladder infections and they were trying to figure out why. I think they said my kidneys are also small but they are both there.

While it’s highly likely someone else has one by the same manufacturer, maybe even of the same style, because it is hand-crafted no one else can have exactly the same piano I have.

Made of cherry wood, with original ivory keys.

I have a copy of Hogfather signed by Terry Pratchett and ppint, who the book was dedicated to. It used to be the only one in existence, but someone else asked ppint to sign it for them a couple of years ago. They (ppint) said we’re the only two people who have ever asked.

Still, mine is the only first edition copy signed by both. Doubt it adds much to its value, there’s an old joke that books not signed by Pterry are more valuable because he signed so many in his lifetime!

8. A Tattoo Designed By My Economics Professor

He flat out told me it was the strangest request he’d ever gotten, that he’d never gotten such a crazy request, and that he wasn’t sure how he felt about it.

Next day, there was a lovely note on my desk, with the graph I asked for, and a signature.

I love it to this day. He just passed away a few months ago, though. RIP, WEW.

I have one of the press plates used to print the front page of the NY Times the day after 9/11.

Now I know other people have this as well… because I originally had seven plates and gifted them out over the years.

But outside us seven, pretty sure no one else has that.

When I was 10 I won a contest at a booth in a Kmart in Upper Michigan to see who could stack the tallest single tower of Oreos in 30 seconds. The tower then had to stay upright for another 10 seconds or so. I think my older brother beat the old record by one, then on my turn I tied him but I had time left and my Oreos looked sturdy so I threw another 5 on even though my parents told me I should stop. It stayed upright and they took my name and number down.

After a week nobody beat my sweet a** Oreo tower so I got a call saying I won, and had a chance to go to like, some sort of Oreo stacking regionals. I didn’t know about that, and neither did my parents, so they sent me a cool baseball that says Oreo Stacking Contest 2002 that I keep to this day.

There’s a few of them out there.

We made one product, launched it with great fanfare, then promptly killed the business unit.

I no longer work there (because, duh, they killed the business unit).

I can’t find any motherboards for it so can’t do anything with it.

I’ve only told like 3 other people this but I have a collection of grocery lists that I find while out shopping.

My dumba** friend elbowed me in the throat about 10 years ago, now the tip of it just sort of floats around my neck independently.

My wife would bring my baseball-crazy 10-year-old to the PATH station in the World Trade Center and I would then take him to the Bronx to watch the game.

15. A Great Grandfather Who Was a Civil War Vet

I know there are others out there, but I haven’t met any of them.

What’s something unique that you have?