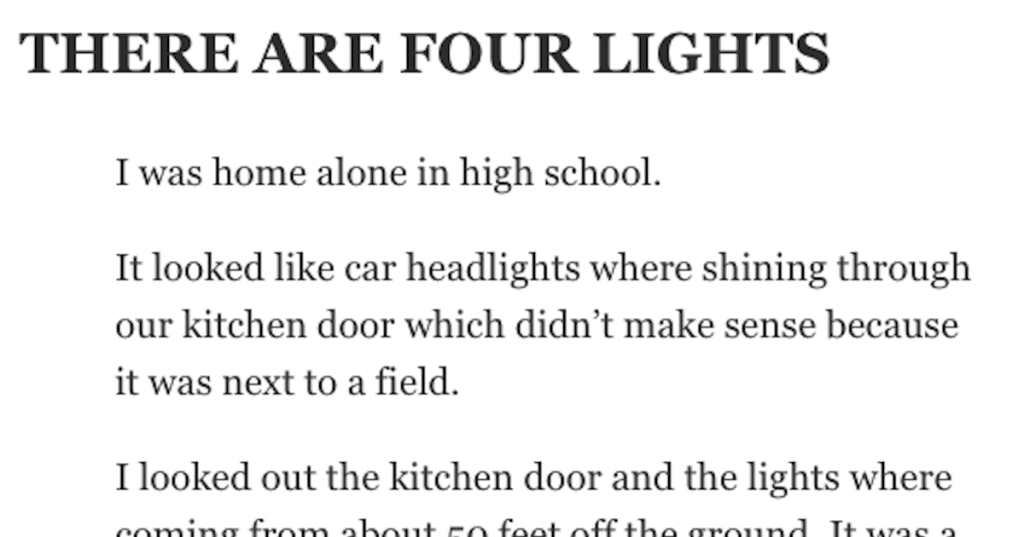 Do you wanna get a little spooked? And also maybe a little moved?

What is a supernatural event that happened in your life that just can not be explained? from AskReddit

I’ll be honest, even though I’m not a believer, reading over these Reddit posts has made me stop and look over my shoulder multiple times. Don’t recommend checking all these out at night / alone.

Night before thanksgiving 3 years ago I was across the country at my parents, driving back to theirs with my now-wife from a friends house. As we draw near, there is some type of bundle in the middle of the road.

I stopped and pulled off to move it, and it turned out to be a barred owl that got clipped by a car. Long story short I spend the rest of that night getting the owl into a puppy cage, gave it some food and water, and the next day dropped it off at a wildlife rescue center.

I got home the next week, all the way across the country (New Jersey to Oregon). I stepped outside and there was a barred owl sitting on my fence watching me. It was gone by the time I got back. But now I know I’m straight with all owls.

The night my friend took his own life I had a sudden urge to call him. I’m in Canada and he was in Atlanta at the time.

I didn’t call because I was out partying with friends and got the news the next day when I woke up.

I feel like I missed the chance to save a friend but my Dad says it was him letting me know he was gone but was going to be okay.

I’m sorry I didn’t reach out bud. I regret it all the time.

My son (now 10) was 4 and was able to name my Grandmother, by name, by a picture of her when she was in her 20’s that was in storage that my mom and I were going through.

She died before my wife and I even met.

He said she was the lady who taught him how to do his “silly laugh”.

THERE ARE FOUR LIGHTS

I was home alone in high school.

It looked like car headlights where shining through our kitchen door which didn’t make sense because it was next to a field.

I looked out the kitchen door and the lights where coming from about 50 feet off the ground. It was a row of 3 white lights and 1 red light.

I opened the door and there was complete silence and the whole field was lit up.

I closed the door quickly, turned around and it was gone.

I was about 15 and trying to sleep but having an asthma attack.

Late in the night I started hearing a rhythmic breathing from the floor next to the bed. It wasn’t scary, more comforting. And it wasn’t me, because my breathing sounded way more f**ked up than that. It helped me calm down and get to sleep, even though I was still sick (I was able to get my hands on an inhaler in the morning). At the time I thought it was a friendly ghost. I later rationalized that maybe I was hearing a family member through the heating ducts.

What I realized years later, when I had a dog, was that it had sounded exactly like a big dog sleeping next to the bed. So now I’m 50/50 on whether a ghost dog came to visit me, or my own dog time traveled back about ten years before she was born to comfort me.

Was in college walking to class. Went to cross a busy street and a hand grabbed my shoulder (quite hard) and stopped me.

A car zoomed by that would’ve killed me.

Nobody was behind me or anywhere close enough to have stopped me.

In high school, I was getting peer pressured into doing something I didn’t want to do, and would’ve gotten in a lot of trouble had a teacher come by, but I felt I didn’t have a choice. I distinctly remember asking in my head ‘if I have a guardian angel right now, please f**king pull the fire alarm or something’

I kid you not at that exact second, the fire alarm went off. (This NEVER happened at this school. It was so unlikely, I didn’t expect it to actually happen. Nearly s**t my pants.)

We immediately went to the assembly area along with the rest of the school, and I got out of the situation. Turns out at that moment someone in the school had accidentally triggered the fire alarm. I spent the rest of the day in shock honestly. Idk if this counts as supernatural but what even are the chances.

That day introduced me to the idea of guardian angels and I have had many similar occasions since then where just in the nick of time, I’ve gotten out of potentially extremely bad situations either due to insane luck, or the nudge of something looking out for me.

We had a kitten-producing cat when I was about six or seven years old. We knew it had kittens since it was pregnant for a while and then wasn’t. We had no idea where the kittens were, which was an issue.

I was curious about it and looked right at the cat, thinking to myself, “Where are your kittens?” but without saying anything, if that makes sense.

My imagination immediately went to the location. Our cat could jump into it from pillars on the side of the porch through some damaged boards right above our porch. I KNEW they were around. I dashed over there, mounted the stone pillar, and peered through the gap in the boards.

The kittens were right in front of me. I’ve never experienced another event like it in my entire life.

When my daughter was about 10, she joined a softball league and I (dad) taught her how to throw, hit, etc. I took her to a local Class AAA minor league game I had never been to this stadium before (~16,000 seats) and had ordered tickets online. The seats I got were down the 3rd base line about as far away from home plate as you can get and still be in the stadium (important).

As the game progresses, she sees foul balls going into the stands and after a while asks if you can keep one if you catch it. I told her yes, and she said, “Catch me one, daddy. “. I spent a few minutes explaining to her why that was very unlikely to happen where we were.

As I’m finishing breaking her heart, I hear a bat crack, look up, and see a long, towering fly ball and knew immediately from my years playing baseball that this one was coming to me. All I had to do was stand up, raise my glove hand to my right ear (I’m a lefty), and that ball smacked perfectly in the webbing. The crowd cheered.

25 years later, I still have the memory of my daughter’s face as I gave it to her. When I think about all the factors that had to come together for that to happen — a leftie batter, the right pitch and swing, the badly selected seating, that I even found and brought my old glove — it affirmed my belief that there is a higher power who sometimes grants small miracles.

Someone to Watch Over Me

Woke up one in the middle of the night to a man standing next to the bed staring at my SO. He was slightly translucent and I figured it was just another sleep paralysis episode (had them before so knew the drill), and rolled over and went to go back to sleep. Normally being able to move isn’t part of sleep paralysis, and immediately my heart began to race as i realized i need to roll over and check what i saw.

Person was still standing there, staring at my SO, then he made eye contact with me. Stared at me for a while before turning around and walking to the wall, slowly fading away with each step.

Next morning SO wakes up looking like s**t and said she had the worst night sleep because she kept having the feeling that someone was watching her. Glad we no longer live in that house.

Funny Man in the Corner

So I was too young to remember this first hand and we moved to a new house a month before I turned 2 years old to give you an idea of how young, but my parents told me that when we lived in our first house I would absolutely not go into my bedroom.

I would put my hands and feet across the doorframe and scream bloody murder and no matter how hard my parents tried they could not get me into that room.

One time my parents must have managed to actually get me in there, and I was crying my eyes out, my mum asks me what the matter was and apparently I just pointed to the corner and said “Funny man. Funny man in the corner”.

My parents let me stay in their room after that apparently.

Yup. I’m…not super happy to be living alone right about now. Anybody wanna come over?

What do you think of these stories?