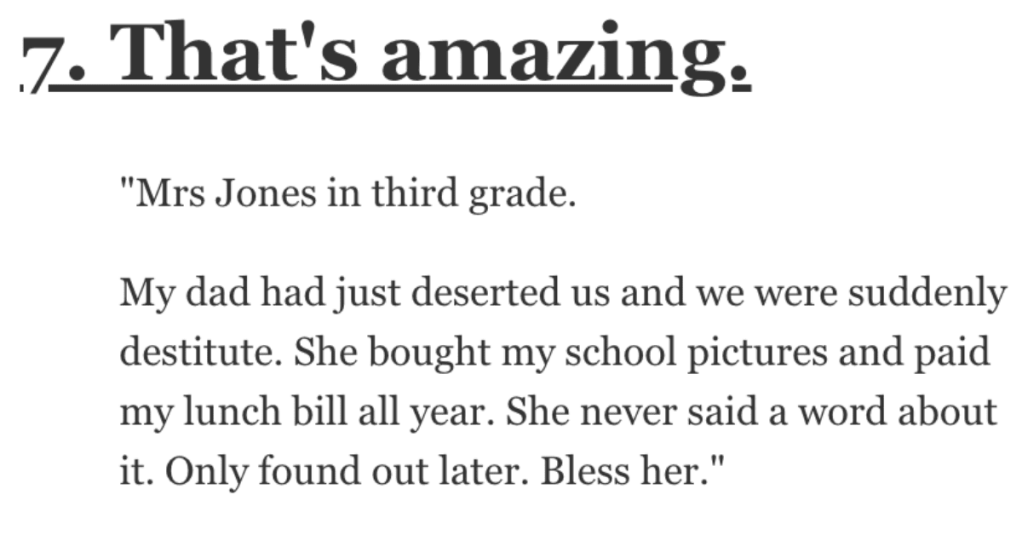 I know this sounds really terrible, but none of the teachers I ever had growing up all the way through high school really had any kind of big impact on me.

Maybe it was my fault because I wasn’t paying attention too much, or maybe it’s just because I got pretty run-of-the-mill teachers. Who knows…

But I think I’m pretty rare because it sounds like a whole lot of people out there had teachers at some point along the way that really left an impact on them.

“I faked my way through 4th and 5th grade math.

I never understood how to do long division, but managed to hide that from the teachers and answer test questions by reverse multiplication – basically guess a number and multiply it out and see how close I would get, and keep doing it until I got the answer.

My 6th grade math teacher figured out that I was faking, and had no idea how to actually divide anything. She had me come in one afternoon to “help with cleaning the erasers” (all the kids fought for this privilege , so I was thrilled), sat me down and tutored me until I grasped the concept.

“My physics teacher in high school hosted an annual trip to Walt Disney World in Orlando for 15-20 kids for over a week.

I was one of the better and most interested students in his class. He was an incredible teacher who found examples in physics everywhere. He also used to work for Disney prior to teaching.

Since my family was not so well off and I could not afford the trip to Walt Disney World, I declined when he asked me if I was going to join. He probed a bit and he somehow found the funds to have me join without me even inquiring. I don’t know if he pulled school money or there was a surplus, but either way, that was one of my best memories from that school.

I still keep in touch with him 15 years later.”

“In high school one of my teachers had this duck-bill whistle (literally shaped like a duck’s bill and it made a quacking noise).

She used it to get the class’ attention. One time I guess we were being extra rowdy and she blew the everloving sh*t out of it and the class went stone-dead quiet.

She got this shocked look on her face, and then took her hair pin out and dropped it and the whole class heard it hit the ground and she got this big grin on her face and we all just busted out laughing.”

“She outed me for pretending to not speak English to my mom. I am mexican American, but I am one of those lame “border crossed me” ones who was really a native American if we are being honest.

At any rate, I ignored my kindergarten teacher so much she assumed I didnt speak English. I had skipped state testing because I had been to 6-7 elementary schools as my mom was skipping out on rent. Middle of 1st grade, a random teacher realizes I am reading library books brought from home in the back and not doing work; not common in a special ed classroom.

She called my mom and teacher to a meeting, had me tested as gifted, told my mom that I was pretending to not understand my teachers, and told us that in 2nd grade I was going to be in her room. I was in trouble for the first and last time in school.

Looking back, this is such an impactful memory. She was the only teacher who cared about me at all. When they opened my backpack at the meeting, I had it packed with random books. I had encyclopedias from my grandparents house, stuff from 3 school libraries, magazines.

Mrs. Judah changed my life because she cared enough to ask the librarian what language I spoke to help me pick more age appropriate books. I was reading a high school level novel because the school had just been converted from k-12.

It turns out high school books were appropriate for me; not age appropriate but reading level. I love her and will never forget the stash of books she kept for me when they converted the library for k-5.”

My Dad was supposed to pick me up, but several times he fell asleep and didn’t answer the phone when I tried to call.”

“The professor I had for my calculus 100 class in university was awesome. He was a good teacher and funny and engaging. If it was a first year class with over 100 people in it.

I was just a face in a big crowd. I was on campus after hours a couple years after I graduated (they run programs for kids in the evenings and was dropping off my oldest) and I saw him. He stopped, looked at me hard, and said “<first name> <last name>. Not a bad student. Not great. But definitely not bad.” And kept walking.

This was a good 6 years after I graduated. Absolutely amazed he would have remembered me at all after teaching how many hundreds of students in between. That is just crazy.”

My dad had just deserted us and we were suddenly destitute. She bought my school pictures and paid my lunch bill all year. She never said a word about
it.

Only found out later. Bless her.”

“Told me I was smart and could succeed.

I had spent the past couple years at a private school, trying so hard to prove myself. Despite doing well academically, I didn’t fit their cookie cutter mold, so I was looked down on by other students and administration. When I told the guidance counselor that I wanted to be premed and go to medical school after college, she pretty much told to lower my expectations because I wouldn’t succeed.

At the end of my college math class my senior year of high school, I ended up in my professors office to look at what I had missed on my final. He told me that I had done well, and that I could my PhD in math if I wanted. That was not what I wanted to do, but when I told him I wanted to be premed, he looked at me and said you’re going to well in that. I know you will succeed.

6 years later and I’m halfway through my second year of medical school, and his words still ring in my mind.”

“Kn my senior year, my English teacher asked me if I was manic depressive after turning in a personal essay, only for me to get diagnosed with bipolar disorder a week later.”

“Had a high school art teacher who would let me stay in his classroom during lunches.

Always gave me half his sandwich and other extra food because he knew I didn’t eat much otherwise.”

“In 5th grade I had this teacher who was very… gruff.

Most of us didn’t like her because she was such a hard*ss. Like military style with discipline and homework completion. She wasn’t mean, but she wasn’t nice either.

Then I found out my parents were getting a divorce. I showed up to school one day visibly upset, kinda shaky, and had obviously been been crying. She basically grunt rasped “Hallway. Now.” I was so not in the mood to be scolded and I knew I was a mess…

I stomped out into the hallway. She told me she knew what was happening at home, asked me if I was ok, then listened to me sob and break down about how I felt. She gave me a hug and asked if I wanted to spend an hour or so in the library since she knew I loved books and then I could ground myself.

It was so unexpectedly kind. I will never forget it. I found out later she was so gruff and short with us because she’d been teaching for a long time and kids are mean.

She had some sort of health condition that left her in pain most of the time and she had to use a cane which caused her to hunch a bit. Over the years all the meanness of the kids made her a little hard and cold. But she really did care about her students.”

“At my high school, we had an annual week long science trip, fully paid for by fundraising. Only 4 people were selected to go each year.

My sophomore year, I was chosen. I knew there was no way I was going to be allowed to go. I had never been out of the state, never been on a single vacation, never been on a plane and never been away from home for more than 24 hours. My parents were incredibly conservative and immediately said no.

I had a science teacher who just didn’t accept the no. Instead of just giving up and selecting someone else, he called and tried to convince my parents. When that didn’t work, he came to my house and had dinner with my family to convince my dad that I would be an asset and he would be doing me a disservice by not letting me go.

He sat and ate my mom’s terrible cooking and talked to my parents for over 2 hours until he got a “we’ll think about it”. Then he just kept following up.

I had never had someone in my corner like that before, who was willing to go to bat for me like that. He wore them down and it was the best week of my teenage life. I’d never seen the ocean. 20 years later and I can still recall every detail of that trip. It was a major pivot point for me.”

Did a teacher ever do something to you that you never forgot?