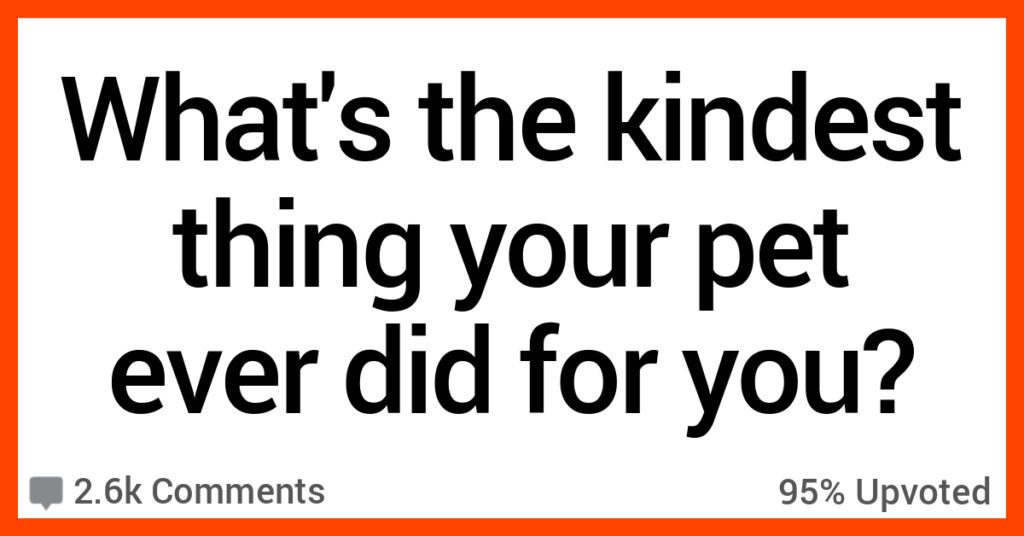 People Share the Kindest Things Their Pets Did for Them

And cats are pretty decent, too…sometimes.

The point I’m trying to make is that we all love our pets and they do a lot of great things for us, as well!

What kind things have your pets done for you?

Here’s what folks had to say on AskReddit.

“When I was pregnant my cat would just lay across my belly, he started this before I even knew that I was pregnant. Every once in a while he would lick my stomach.

When I miscarried he moved up to my chest and would lay his head right over my heart. It’s been years but he still does it. It makes me cry sometimes but I know he had been excited about my pregnancy.”

“My cat stayed In bed with me the entire time I had COVID.

I was shocked because he’s usually an a**hole.”

“I was in a bad state and was crying a lot . Suddenly my baby turtle climbs on my feet and keeps staring at me.

I then pick him up and keep him in my lap, he still keeps staring. I begin to laugh and then he basically puts his head in his shell and sleeps.”

“My dog had to pee in the middle of the night and he did it in the bathtub instead of on the floor.

I thought that was really sweet.”

“I was going through a bad break-up and had all the classic heartbreak signs: loss of appetite, bad sleeping patterns, lethargy. If I fell asleep on the couch, my dog would (try to) pull a blanket off the back of the couch over me.

If I didn’t eat, she would either drag me to her full bowl or wake me up by dropping kibble on me. If I slept too long, she would drop toys on my face. Up to and including her favorite Chewing Rock. Which was a fist-sized rock she liked to chew on.

When I was a baby my aunt was on her phone not paying attention at all and baby me was crawling on our deck and then all of a sudden I fell into the pool my dog Zoie saw and began to bark like crazy until my aunt came over and saw me drowning.

I was told I was under the water for 10 minutes and the doctors said I wouldn’t make it but I survived and it’s all thanks to her I literally wouldn’t be here if it wasn’t for her.”

“Back when I was rather trapped in an a**sive relationship (seriously, he would threaten to k**l me, and getting out took help), I was sobbing once after one of my exe’s a**sive episodes and his cat came up to me, put her paw on my cheek and started licking my face and purring for me.

She was basically being the best mama cat she could be for me at that moment. I still tear up thinking about it.”

“I had a pet rat once, she was the sweetest thing. Of course, some people don’t like rats because they think they’re mean and dirty and things like that, but whenever I hear that I tell the story of the one time my rat bit me.

She was a really good rat.”

“After my dog ran away and was presumed d**d (he wasn’t, he just turned up 10 km away. In three days he somehow ran 10 or more km, my cat snuggled up to me and just, sat.

He let me cry, he was just being genuinely nice. Normally he’s an a**hole, but sometimes he’s a really nice animal!”

“I had a parrot and got dumped by this girl and was heartbroken. Granted I was only 14 at the time so I just started crying.

That bird flew down to my bed, ran up my arm and stared giving me kisses and wouldn’t stop till I broke out laughing then it joined me.

His name was Elvis, he was my buddy for about 24 years and always was at my side when I was down.”

“I survived stage IV cancer and a bone marrow transplant.

Often I would have a hard time sleeping because of the steroids I was on w/ chemo. I would go upstairs to the den and would see some random sad commercial, or a poignant scene in a show/movie, and I would silently cry. I don’t know why silently, but my dog Fry always came up; without fail.

He would sleep on my tumors during my treatment. I’m not religious, but if there are angels, Fry was one.

“Acquiring a dog may be the only opportunity a human has to choose a relative.” Mordecai Siegal.”

“Just existed. When I moved schools my sophomore year my mom got me an old man cat named Jack.

When you’re a confused teenager who’s whole world was just turned upside down due to your mom moving in with her a**hole boyfriend, all you want is a friend and that exactly what he was. If it weren’t for him I wouldn’t have woken up in the morning for school/work.

I wouldn’t have tried. I wouldn’t have cared. He sadly passed away last month but I’ll never forget how he changed my life. You’ll never truly understand how great of an impact an animal can have until they’re gone. I’ll never meet another cat like him. Rest In Peace Jacky boy.”

Has your pet ever done anything sweet and kind for you?