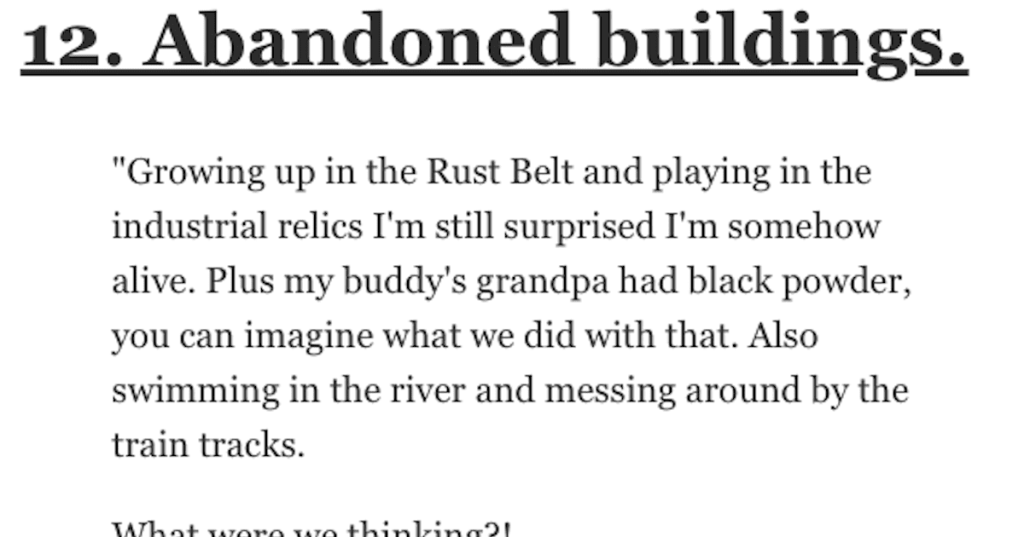 Maybe it was just the era I grew up in, the late 1980s and early 1990s, but my parents didn’t seem to keep TOO close of an eye on my younger brother and me when we were growing up.

It probably also had to do with the fact that we were the youngest out of five kids, so my parents had already done it all and seen it all.

And we ran wild and did stupid stuff every single day! It was a blast, but when I look back on it now, I’m shocked neither of us or any of our friends ended up badly hurt…or worse.

Let’s see what people on AskReddit had to say about the crazy and dangerous things they did as kids.

“I used to have free rein in the woods behind the base housing at Fort Bragg. My friends and I would ride our bikes through the woods for hours in the summer at the tender age of 7 like it wasn’t a big deal.

I’d never let my 7 year old now wander around the woods like that now-a-days. One day we found a vine that was dangling next to a ravine and do a Tarzan Juno across it. It was probably a good 30 foot drop to the bottom of a pit filled with jagged rock and dubious puddles of ick.

I wasn’t supposed to show my parents, but I did one day and they freaked out and cut it down. My friends were mad at me for like a minute until they all agreed it was indeed incredibly dangerous and for the best. Perhaps the most logical conclusion I have ever seen kids come to in my life.”

“Back in the old days when folks didn’t lock doors, my dumb *ss used to go in my neighbors houses and wander about while they slept.

Then I’d get scared and leave. Very dangerous as a 6 year old young lady.”

“I grew up on an Air Force base and behind the school was an old pond with suspicious rainbow ripples that was surrounded by 50-gallon barrels.

We called it the Devil’s Claw and spent the entire summer there every year.

I looked it up recently. Yep, it’s a hazardous waste site because it was where the jet fuel was dumped.”

I almost burned down the house in Mexico when I was like 8. I set a fake plant on fire and ran away. Mom was cooking next door and put the flames out.

In the U.S I burned a hole in the carpet in my room when I was in middle school. Covered that up with small pink carpet. Parents never found out until I moved out.”

“Some parents seem concerned their kids will have s*x when they’re teenagers.

I’m terrified my kids will go off and do some of the things I used to do with friends and get unlucky and die.

There was a train bridge near where I went to school. It went over a ravine with a shallow creek. We would climb underneath it.”

“My cousins and I, from the time we were toddlers, were just sent out into the forest in the morning with nothing but whistles to “scare the bears.”

One time I chased a bear…”

“I grew up in Kigali, Rwanda. After the 1994 genocide there were land mines all over the place.

We used to walk to our primary school (about 1.5km). As kids we used to place soccer on the street while walking to school, so 1 day the ball fell in the bush as always, and i went for it. Little did I know the the stone-like thing under the ball was a notorious landmine, I got the ball and i asked the other older kid what it was.

10 min later the entire neighborhood was on site talking about how I just cheated death. Never will i ever forget it. If I stepped on the mine that afternoon, I would n’t be writing this today.”

“We used to play with chemicals in my neighbors garage.

Like combine all different kinds of chemicals we could find, I would assume lawn care and car chemicals , in her garage into a hole in the cement floor.

“When I was a kid, we used to toss apples under the tree, climb the tree, and when the horses that my grandparents raised would come to eat the apples, we would leap onto the horses.

Most of the time the horse would buck and take off running, with a kid on its back.”

“Tree riding. Climb a tree and have your friends cut it down.

We would have contests to see who would climb the highest. I won more than once.

I cannot fathom how I nor anyone else was not seriously hurt, never mind killed.”

“I grew up within the boundaries of Tufts University’s campus, at the end of my street was a campus building that was six stories high.

I remember climbing to the top of the fire escape, stepping over the railing onto the slate pitched roof. I held onto the dormer and made my way on top of that roof, then I would walk up to the pitch of the roof and straddle the pitch and look out on the Boston skyline.

I was under 10 years old. Well over a hundred feet up, one slip and I was sidewalk pizza. I can’t believe I survived being a latch key kid in the 1980s.”

“Growing up in the Rust Belt and playing in the industrial relics I’m still surprised I’m somehow alive. Plus my buddy’s grandpa had black powder, you can imagine what we did with that. Also swimming in the river and messing around by the train tracks.

What were we thinking?!

Yeah, I don’t know how I even still have all my fingers and toes.”

In the comments, tell us about the things you used to do when you were a kid that could’ve gotten you killed.