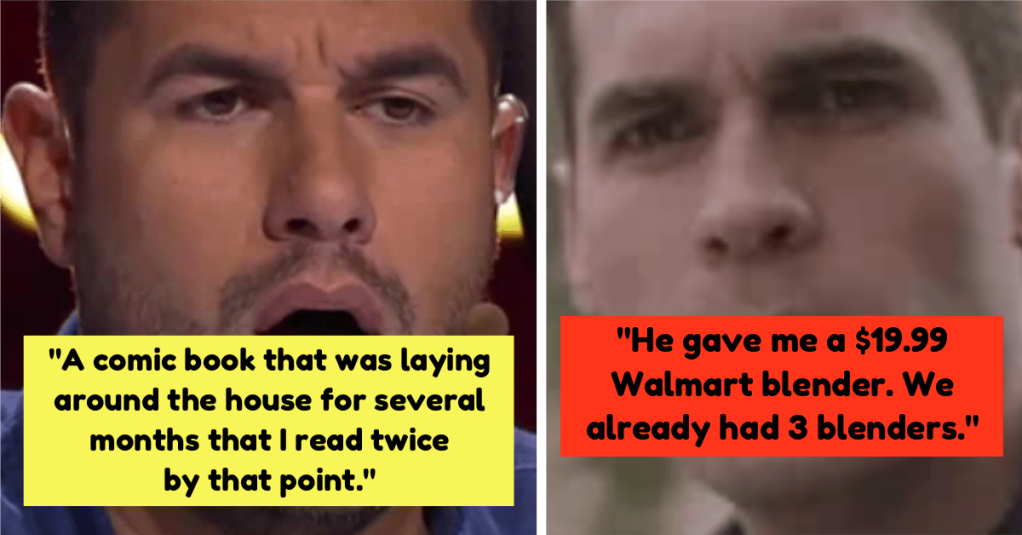 People Share the Worst Christmas Presents They Ever Received

I can honestly say that I’ve never received a Christmas gift that I thought was truly awful.

But I know that a lot of people out there definitely have!

So let’s hear some stories from folks on AskReddit about Christmas presents that they thought were just the worst.

“My husband’s step mother gave me, a 36 year old at the time, a kindergarten size back pack and when I opened it she said, “I actually bought that for ——- (a child) a few years ago and she h**ed it so I threw it in a closet and I saw it and thought you’d like it. None of us did, we all think it’s ugly.”

That same year they gave my 3 kids gifts totaling all together $15 with the clearance stickers on them while her biological granddaughter opened a $300 unicorn. Which they made sure we knew cost $300, and then they pointed out to everyone our clearance stickers and what great deals they were (they weren’t), and then they made my kids leave the room so the grand daughter could take pics alone with her unicorn.

It was the last Christmas we visited them.”

“When I was 12 I bought myself a kindle.

Me and my sister spent an entire summer working for our grandpa and stepdad to save up for them, each of us spending about 200$. My mom got all 3 of my brothers a kindle for Christmas and I got some Clothes from old navy.

I was livid and when I talked to my mom about it she told me that my sister and I had been excluding our brothers from hanging out while we played videogames and it was unfair. She never apologized or saw anything wrong with what she did, and I honestly still haven’t forgiven her almost a decade later.”

“The time I was really into Green Day and the emerging “alternative” music of the mid ’90s. And my mom bought me a few CDs (back when CDs were something stupid like $20 each).

Wow! Awesome gift! Except the CDs were Toni Braxton and Mariah Carey and something else I’ve completely forgotten.”

“When I was 10 years old my grandparents gave me an unwrapped suitcase for Christmas.

In the interests of convenience, they used that suitcase for the wrapped presents for my sisters.”

5. You needed another one.

“The year I gave my ex husband a Tag Heuer watch he gave me a $19.99 Walmart blender.

We already had 3 blenders.”

“A comic book that was laying around the house for several months which I read twice in this period.

I didn’t know it was supposed to be my surprise present.”

My brother got a guitar and amp.

My two sisters got a bike each.”

“My dad brought nine year old girl me motel shampoo and an adult mens shirt he got for free.

Wish I was joking.”

“A Titanic DVD, pirated copy, already seen it before twice, didn’t have a case, just had Titanic written in marker pen, it didn’t belong to the person who gifted it, the DVD was SCRATCHED AND DIDN’T EVEN PLAY!”

“One year I got nothing. Not even a card.

Not even from the secret Santa I participated in at work.

That was a difficult Christmas.”

“Eons ago I worked for a company owned by the richest man in Minnesota.

One year, all of us peons (and there were a couple thousand of us) got a copy of his book; it was al about how he became the richest man in Minnesota.

“So I was dating a guy for a few months when Christmas rolled around.

He had recently started a new job that required travel and this was before smart phones and built in GPS in your car were common, so I splurged a bit and got him a Garmin to help him find his way. Thoughtful, useful, but not too sentimental; it felt perfect for where the relationship was at the time.

Due to schedules, we couldn’t get together until a few days after Christmas. In my haste to go see him, I walked right out the door without his gift. I didn’t realize it until I got to his house and I felt terrible, but he said, “No worries, I’ll give you your gifts now and I’ll just get mine later.”

Cool. So he goes into the other room and comes back with two wrapped gifts. I noticed some of the paper was messed up like it had been rewrapped, but didn’t think much of it in the moment.

I carefully unwrapped the first package.

It was a MMA magazine. That had clearly been read.

I do not like MMA. Not even a little bit. Nor have I ever expressed interest in MMA. Not once.

He, on the other hand, loved all things MMA.

Trying to move on, I politely thanked him, set the magazine down, and refocused on the next gift.

I could tell it was a DVD from the shape of the package.

And indeed, it was a DVD. A Forrest Gump DVD. With the cellophane wrapper missing.

Now don’t get me wrong, Forrest Gump is a solid choice. Except, I already owned a Forrest Gump DVD. And now here I was suddenly the proud owner of a second copy that appeared used.

I again thanked him and sat there quietly, trying to wrap my head around how he could have arrived at the conclusion that a used magazine on a topic I didn’t like and a secondhand DVD of something I already owned would make for good Christmas gifts.

He also got a little quiet, then sheepishly volunteered, “I, uh, got bored so I watched the movie yesterday.”

“And then I, uh, hadn’t seen that issue yet… so I went ahead and read through it. I think you’ll really like it!”

I slowly responded, “So… you got me a magazine because you wanted to read it and then watched the movie you got for me because you were bored?”

His only response was, “Well yeah, I guess so.”

I left not long after.

The next day, I returned the Garmin for a full refund.

As we were wrapping up the call, expressing well wishes and all that, he paused for a beat and said, “Hey, uh, were you still going to give me that Christmas present?””

What’s the worst Christmas present you ever received?