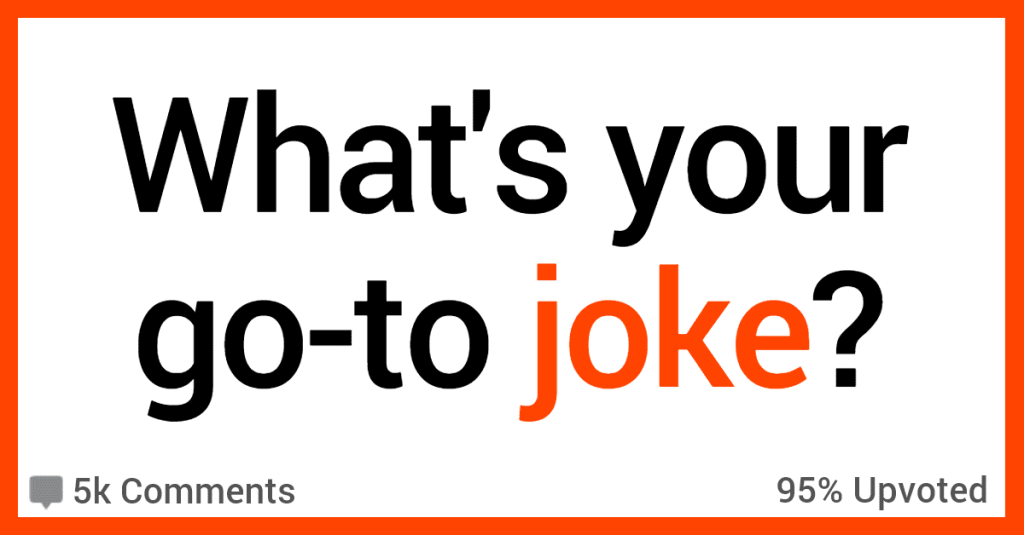 I’m someone who’s spent a lot of my life creating comedy, both as a hobby and professionally. I’ve performed hundreds of comedy shows, written and produced dozens of scripts, even tried stand up for a while.

And yet for all of that, when someone just asks me to “tell them a joke,” I literally can only ever think of maybe two.

If someone asks you to tell them a joke, what’s your go to? from AskReddit

Here are a few from the geniuses of Reddit.

A man has an interview for a Sales Manager position at a company.

During the interview, the Hiring Manager pulls out a brand new laptop and sets it on the desk in front of him.

“If you’re as good as you say you are – sell me this laptop.”

The man picks the device up, studied it for a few seconds, then puts it under his arm and walks out the door.

He’s halfway down the hall when the Hiring Manager shouts, “Hey! Bring me back that laptop!”

On their way to get married, a young Catholic couple is involved in a fatal car accident… The couple themselves sitting outside the Pearly Gates waiting for St. Peter to process them into Heaven. While waiting, they begin to wonder: Could they possibly get married in Heaven? When St. Peter showed up, they asked him.

St. Peter said, “I don’t know. This is the first time anyone has asked. Let me go find out,” and he leaves.

The couple sat and waited, and waited. Two months passed and the couple are still waiting. While waiting, they begin to wonder what would happen if it didn’t work out; could you get a divorce in Heaven. After yet another month, St. Peter finally returns, looking somewhat bedraggled.

“Yes,” he informs the couple, “you can get married in Heaven.”

“Great!” said the couple, “But we were just wondering, what if things don’t work out? Could we also get a divorce in Heaven?”

“OH, COME ON!” Peter shouted. “It took me three months to find a priest up here! Do you have any idea how long it’ll take me to find a lawyer?”

A farmer looks up and sees his prized sheepdog running toward him.

The sheepdog is panting, and says, “Boss, I did it. It took me all morning, but I finally got all 100 sheep in the barn.”

The sheepdog says, “Yeah, I know. I rounded them up.”

A pirate walks into a bar with a steering wheel in his pants.

The bartender asks, “what’s a steering wheel doing in your pants?” And the pirate says “It’s driving me nuts!”

Two men are drinking in a bar at the top of the Empire State Building.

One says, “Did you know if you jump from the top of this building, the winds around the skyscrapers will stop your fall and blow you right back up here?”

“No way,” replied the second man.

“Here, I’ll prove it,” said the first, and he jumped out the window, fell down, down, down and then reversed course and came right back up and through the window.

“Amazing!” exclaimed the second man, “Let me try that.” He jumped and fell all the way to the pavement below.

The bartender says to the first man, “D**n, Superman, you’re an a**hole when you’re drunk.”

Three statisticians go hunting. They’re camped out for several days, cold, frustrated and on the verge of giving up when one of them finally spots a deer.

The first statistician raises his rifle and fires, but misses to the left.

The second statistician aims and fires wide to the right.

The third statistician jumps up and exclaims, “we got it!”

A soldier goes on tour, leaving his wife at home alone in a rough part of town. The wife decides to improve her home security by getting a guard dog.

So she goes off to the pet shop and starts looking, but all she is seeing are chihuahuas and pomeranians. She goes up to the owner and asks if he has any big guard dogs. The owner says no, but says “come on back, i have something that might work out for you”

He takes her in the back, and there is a big crate in the middle of the room. The owner takes five minutes to get the top off, but all the woman sees at the bottom is a small ball of fur. “What’s that?” Asks the woman.

The owner says “this is a woolybear, watch this”. He then takes a large chair, places it at the bottom of the cage, and says “woolybear, my chair”. The woolybear teats the chair to splinters.

She buys it, takes it home, and trains it to help out around the house. “Woolybear my trash, woolybear my leaves.”

Finally the husband comes home, he sees a large (by now) lump in the bed with his wife, “who’s that in bed with you!” He screams, the wife, startled replies “the woolybear”. The husband, incredulous, says “woolybear my a**!”

Jesus and his twelve disciples enter a restaurant.

Jesus says to the hostess “We’ll need a table for twenty-six”.

The hostess looks over the group and says “Sir, there’s only thirteen here”.

Jesus responds “Yes, but you see, we’re all going to sit on one side”.

A group of foreign exchange students from France, Spain and the Netherlands enter the back of the room during a lecture. The professor notices they need to be able to view his presentation, so he gets up on a platform. Yelling, he asks them, “can you all see me back there?”

A guy invited a centipede to a movie and said “hey centipede would you like to go catch a movie with me?”. The centipede didn’t respond.

He then asked a second time “say centipede I asked if you would like to catch a movie later on today?” Still no answer.

By the third time the man was feeling pretty offended and said “Hey centipede if you don’t want to go to the movies with me you can just say so, no need to be rude and ignore me…”.

The centipede then turns around and yells at the man “I heard you the first time I was putting on my shoes!”……

Two giraffes walk into a bar. One falls down dead, the other goes up to the barman and orders a drink. The barman says “ hang on you can’t leave that lying there”

The giraffe reply “mate that’s a giraffe not a lion”.

A penguin walks into a bar an goes up to the bartender an says “Could ya help me I’m looking for my brother?”

Go to answer, in a bad pirate accent: “you’d think it’d be the arrrr but it actually be the sea(C)”

If they say C: “it’s actually P because otherwise they’d be irate”

so the bear mauled the waiter to death

3 old guys are sitting in a nursing home, the 1st guy says “You know life would be great if I could only take a good p**s, my prostate is so swollen that I can hardy pee.”

The 2nd guy says “I have no problem peeing, my problem is that I cant take a good crap I am always constipated. Life would be great if I could just have a good s**t’.”

There, now you’ve got a bunch of go-tos to take with you.