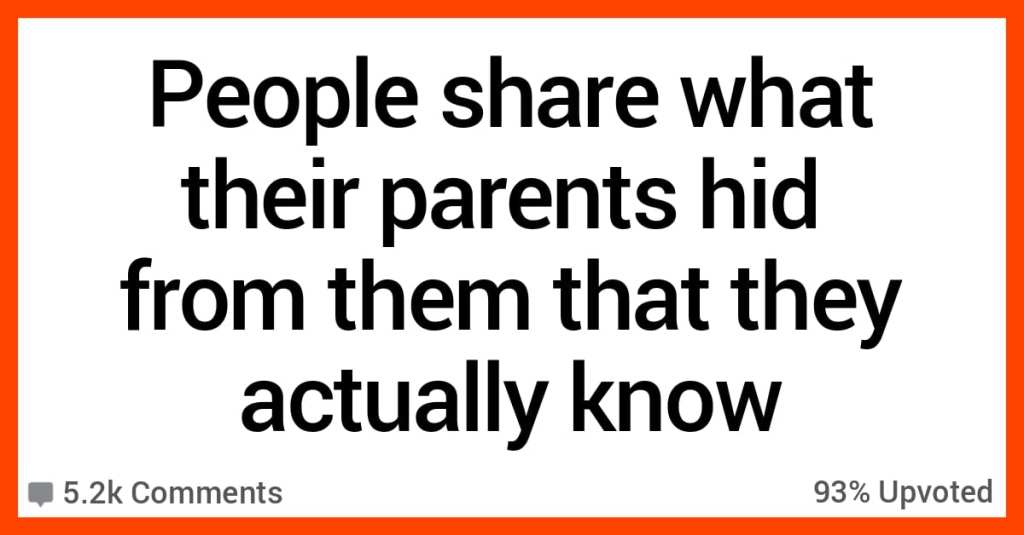 When we’re kids, we look up to our parents because they’re the only game in town. And they feed us. And they buy us everything. They’re basically our gods, and when we finally realize they’re just as human as all of us… that’s a weird day.

It’s especially strange when we learn those things that our parents think they’re keeping from us… but they actually know.

That’s what these people thought after learning secrets that their parents were keeping from them.

Get ready for some shocking secrets!

“They have a LOT of s*x toys and nookie related stuff.

They think I do not know.

“The reason for my parents divorce.

Turns out it was because I’m a girl and not a boy like my dad wanted, and the fact that my dad just ended his 5th marriage.

He says it’s only his second.”

3. Those family reunions aren’t weird or anything…

“My dad says he met my mother because my mother’s sister introduced them.

But I”m pretty sure my dad was actually dating my mother’s sister first.”

“Recently i was checked into a mental health centre for various reasons, and part of it was that i had to have a few assessments done.

So the woman coming to assess me comes into the room, we sit and chat for a couple of minutes before she pulls out my file.

First thing i hear is her mutter to herself “so this is the girl who’s adopted…” or something along those lines.

Seconds later she meets my eyes and all the color drains out of her face.

In hindsight it explains a lot really.”

“My dad almost had an affair but he backed out right before my mom caught him.

I only know because I overheard them at night.”

“My mom never told me I had Aspergers (Autism.)

She full well knew but never told me, I think she might’ve been in denial herself. When I got kicked out at 16(pregnant) I looked into my school files and saw it said I had Aspergers. I have been going to therapy. 4 years later when I was finally talking with my mom again she said “you didn’t even know so it’s not a problem.”

Me always feeling weird like something is off from others could’ve been prevented. I did everything to fit in thats what led me to feel like an outcast. I was the popular girl at school and I was doing stuff I shouldn’t just to fit in. If my mom would’ve just tell me I probably wouldn’t of done drugs or get pregnant.”

“My mother is unaware that I am fully capable of hearing her many phone calls to her friends in which she complains about what a horrible disrespectful daughter she has.

She doesn’t realize that everyone can see her posts and comments, and she is on there everyday.

I have no idea why she is trying to keep it a secret.”

“I found out about a year after the fact that my parents hit one of my dogs with their car. They buried him the same evening. Told me he must have run away.

Only found out because one of my dad’s friends happened to witness it (he was waiting for my parents in his car in front of our house), and he let it slip during dinner.”

I don’t know why they lied, I guess tried to spare my feelings, but I either way was convinced my dog died after he was missing for a couple of days (he would sometimes spend the night in our neighbor’s yard, but was never gone longer than that), so it was a pointless cover-up.”

“Mom told me she got her tubes tied after she had my sister. She told me this when I had questions about babies when I was younger.

Anyway, 20 years later she became pregnant again. I asked her about it and she insisted that she got her tubes tied, and that the surgery was botched and wasn’t 100% effective (true).

My dad (divorced about 18 years ago from my mom) found out from me about the baby. I forget specifically how the conversation went. I told him something along the lines of, “wow, it must suck getting your tubes tied after [sister] was born only to get pregnant 20 years later.”

I asked him why he laughed and he asked “did she really tell you that? She didn’t want her tubes tied after your sister, so I got a vasectomy instead.” I also had a good laugh. Not sure why she’d lie about something so small, but if it means that much to her, then I won’t say anything.”

“I accidentally overheard a phone call between my mum and my grandma.

Turns out my grandpa had tried to run away from the residential home in the middle of the night.

He had also told my uncle that he wished he died and that they stole his money and so on.

He’s better now though, but my parents still doesn’t know that I know this.”

Ohh boy… I could say SO much about my parents but…. no, I won’t. But I know so many things they think I don’t know… and yet I do!

Have any stories about your parents? Want to share what you know?

Do it anonymously in the comments! We won’t tell anybody. 😉