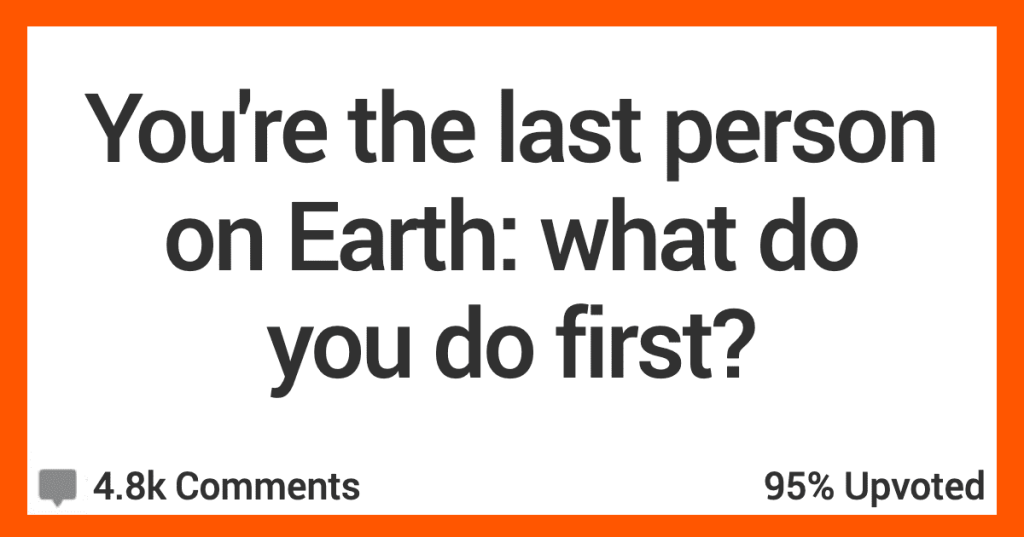 Have you ever thought about what you’d do if you were the last person on Earth?

Just roaming around freely and doing whatever you wanted?

Well, if you haven’t, maybe these answers from folks on AskReddit will give you some good ideas!

“The first thing I do is go to the hardware store and get a ton of those triangular door stops — the rubber ones you get to jam under a door to keep it open.

The last thing I want to do is end up trapped in some parking garage stairwell and slowly d** of thirst.”

“Break into the fanciest house I can find and live in it.

Somehow hot single women would spawn near your location.

It’s easy after that.”

Then drive to an airport, and fly a plane to a dream hotel.

Enjoy my last few days before the world collapses.”

Not for aliens, but just to see what they’re working on.”

“Go and find a farm where food is already growing, and live there.

Yes there will be tinned stuff but I am going to need a supply of fresh food also that I can maintain.”

I’m already not looking forward to losing any of my family but to have them ALL gone at once would break me.”

Teach them rock paper scissors or something.”

“Download as much reference material as I can from the internet, including maps, before the infrastructure starts to go down.

Back it up as many ways as possible.”

“Go to a pharmacy.

“As a woman: Get to a fertilization clinic and impregnate myself with some (hopefully still working) sperm.

This is my chance to become the Eve of a new population!”

“Find a famous preppers house that has a way to generate power(probably solar panels) and a big food supply then I would hit the supermarket and take all foods that expire soon because a lot I probably can’t t create myself.

I would print out a lot guides and information i can find on the internet as i have no idea if it will remain operative. I don’t think food will be hard to come by for the first couple of years as i could probably survive the stock that people/supermarkets have.

I would then go to a police station to get some guns and ammunition to protect myself from wildlife and possible other survivors and eventually shoot myself through the head as i can’t think this will be fun for more than a couple of years.

Then i would need to find a large truck and weld battering ram in front of it (to clear the roads). I’d probably take one or two dogs as companions. And explore the shit out the world. I’d go the all the places im not supposed to go, Area 51, find out what’s going on in the Vatican, Check out loads of government secrets.”

What would you do?