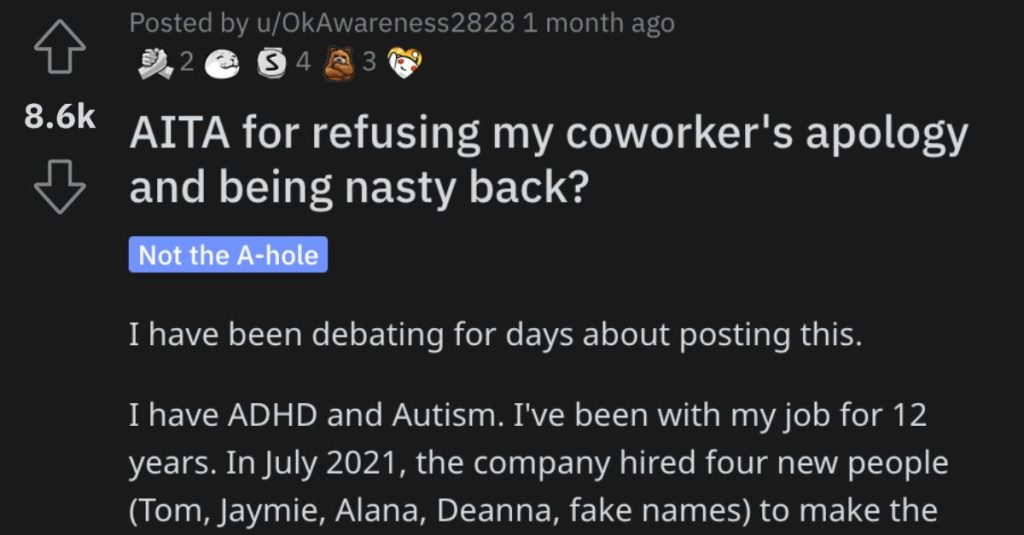 This Person Refused Their Co-Worker’s Apology. Are They Wrong?

We’re taught to accept apologies from people from a young age…but is it always the right thing to do?

And even if it’s not the right thing to do, is it okay to stick it to someone who’s been a jerk from time to time?

Check out this story from Reddit’s “Am I the A**hole?” page and see if you think this person acted like a jerk.

AITA for refusing my co-worker’s apology and being nasty back?

“I have been debating for days about posting this.

I have ADHD and Autism. I’ve been with my job for 12 years. In July 2021, the company hired four new people (Tom, Jaymie, Alana, Deanna, fake names) to make the team that I work on. Unfortunately, none of the new people on my team are very nice to me because I’m odd. The only person who is ever kind to me is the new manager of our team.

The new people started holding potluck meals. The first time I found out after the fact, while they were eating without me. I asked them to let me know next time and I would bake something. The second time it happened, they said it was an oversight, oops. By the third time, I got the hint, I wasn’t welcome. I was hurt but let it go and did my job.

Our new manager asked why I never participate in the TEAM potluck. I told her the truth, I’m never invited, but she swore Alana texted me. I told her none of them ever contact me except for essentials by email only, and they make a point to avoid me. When my manager confronted the group, they lied and swore they asked me but were unable to produce the promised text. My manger and boss decided to no longer permit potlucks on company property.

The next day, they cornered me in the break room when I went to eat lunch and began to shout at me for ruining their lunches.

I ended up having a meltdown. I told them I didn’t ask our manager to do ANYTHING about it, that our manager said they called it a TEAM lunch, that I was part of the TEAM too and she was bothered that I was excluded and took it upon herself to do something about it. I said that I knew I was weird and that was why they didn’t like me.

I told them that I have ADHD and am Autistic and I’m doing the best I can to fit in, but I’m not stupid, I know I’m ALWAYS being left out on purpose and lied to and about, and that it hurts to never feel like I fit in or matter to anyone. By the end I was sobbing myself sick and my mom had to pick me up early because I was panicking so badly. I found out later my coworkers were put on administrative leave without pay and forced to go to sensitivity training before they could come back to work.

A few days later, Tom approached me to apologize and said his nephew was Autistic, too, and he should have realized and done better.

I asked him, “If someone treated your nephew the way you treated me, for over a YEAR, and only apologized after getting caught and punished for it, what would you tell your nephew to do? Would you tell him to accept that apology?”

He quietly admitted he wouldn’t, that he’d tell his nephew to tell them to go f**k themselves. I told him to go tell himself that, get back to work, and leave me alone. No one else even tried after that.

My manager is now saying I overreacted and should just accept the apology and give them another chance to keep the peace. My job coach says I should apologize, too, but I really don’t want to.

One person said that this person is 100% NTA. 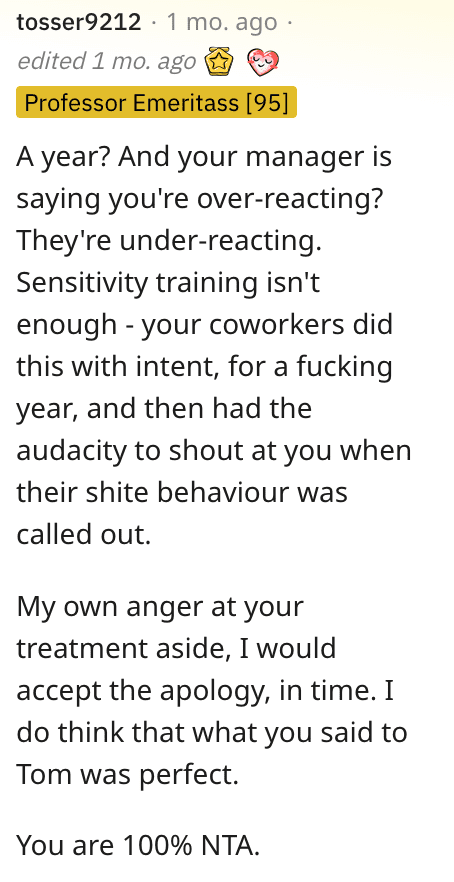 And another argued that they’re NTA and had some advice about what they should do.

Another Reddit user also said they’re NTA and that they should only apologize if they think their job is at risk. 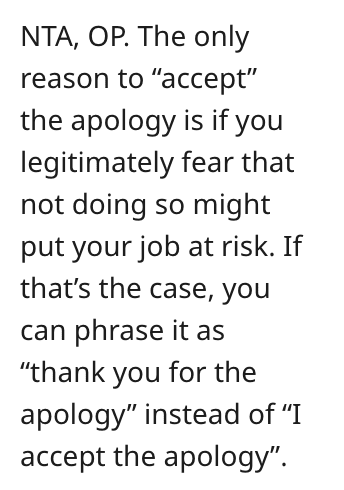