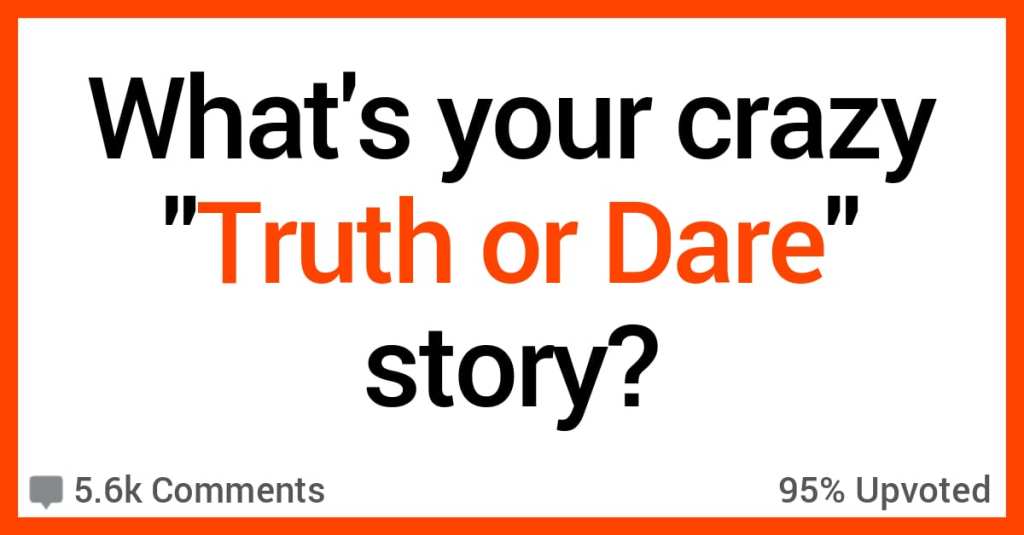 People Shared Their Most Interesting “Truth or Dare” Stories

Playing Truth or Dare is pretty much a rite of passage during adolescence.

Youngsters do stupid stunts, pull pranks, make out with each other, and do a whole host of other reckless things that they’ll be embarrassed about for the rest of their lives.

Hey, that’s what growing up is all about!

People on AskReddit shared their most interesting “Truth or Dare” stories.

Let’s see what went down!

“I licked my friend’s armpit and puked all over the tree fort.”

“I humped a wall because I didn’t know what “making out” meant.”

“In high school once a girl dared me to lick her feet for a minute straight, poor soul didn’t know the fact that I’m a foot guy.

I did it like I was disgusted by it, she seemed so happy and was laughing like she was actually punishing me, in reality it was one of my favorite moments in whole my life.”

“Accepted dare to eat an edible.

I occasionally smoked mild indica, the edible was potent sativa.

I don’t remember much of the night after that, but the flashes I do have involve a lot of shaking, anxiety, and puking.

Ended up making out with EVERY female at the table, and nearly had s** with one…but a car crash kinda ruined it.”

I couldn’t cry so I just sat there for like 20 minutes, after that went to the bathroom and passed out from the pain.

“I was dared to make hickeys on my nipples with a vacuum cleaner.

Luckily, I wasn’t hurt, but then there appeared a video of the process…”

She did it while laughing hysterically until it came… never hung out with them again.”

Few days passed and he came running to me to go look in the toilet.

There in the toiled was the marble.

“I remember in middle school being dared to show my d**k to a girl who was kind of cute.

I did, and got my first handy as a reward.”

“This is a very convuluted, complicated story, with much more to it, but ill keep it as short as I can.

I was dared to cover the head of my d**k with Cayenne Pepper, then close my foreskin over top of it. I was 13-14 at the time and was in a situation that would have looked REALLY bad to my foster parents.

Ironically, about 5 minutes after I did the deed, my foster parents pulled up to the house. So everyone playing scattered, but I had a d**k full of cayenne pepper and it was burning, like a lot. But it gets worse.

My friend that was over for the night decides to do it as well because I look like I’m “being dramatic”. He didn’t use as much as me, but we both were in so much pain and regretted everything. So we decided we were gonna go get cleaned up. Me first because I did it first. Except for one kinda big problem.

My foster dad worked in construction, then go to my foster moms business and would help her until she closed. Then he would come home and shower immediately, then go to bed. He would get angry if you tried to shower after he had gone to bed, cause the bathroom was right next to his room, and the pipes were extremely loud.

So by the time I got upstairs to get cleaned up, he was walking towards the only bathroom with a towel in hand. I had to tell my foster mom I was doing the “pee pee dance” cause I was moving around so much and looked so uncomfortable. I couldn’t tell my foster parents the truth, cause that would involve them knowing that we were playing truth or dare and had a fit.

I went outside to “pee” but actually just left my wang hanging in the cool wind to help with the burning sensation that wouldn’t go away. I also tried to scoop some of it off (yes I used that much, because I’m an idiot, that’s why) but if I touched it too hard it was just burning more and felt even more uncomfortable.

So I got the genius idea to grab two glasses of water, take them down for my friend and I, and we would get cleaned up downstairs in my room, then just dump the cayenne d**k water out the window. Sounds great right?

I get the water downstairs, and my friend is already in my room, using one of my deodorant sticks on his junk to try and counter the burning. So he rubbed his sweaty cayenne pepper d**k all over my deodorant I used for school after gym.

By the look on his face, I could tell he could give less than a f**k about it. I couldn’t really either cause I was focused on cleaning myself up. I hand my buddy his glass, and we clean ourselves up to the best of our abilities, dump out the cayenne d**k water, and then go to bed.

The next morning, we go upstairs for breakfast and bring our glasses up. I went to put mine in the sink, and my foster dad said something like “don’t grab another glass we don’t need any more dirty dishes then we already have”. And so I said “oh no I’m just washing ours before dinner”. He says “why? You just had water right? Its not even dirty”.

And because I have social anxiety and didn’t wanna talk about this any more than I already was, I just said “yeah I guess your right”. We both filled our glasses with water, didn’t touch them, then I got yelled at for wasting drinking water (we had to buy our water from in town cause our well water was salt water).

And yes, I forgot about the cayenne d**k deodorant and put it on at school. It burned and chaffed my armpits during flag football. Worst fu**ing game of truth or dare I ever played.”

Tell us your “Truth or Dare” stories in the comments.

We can’t wait to hear them!