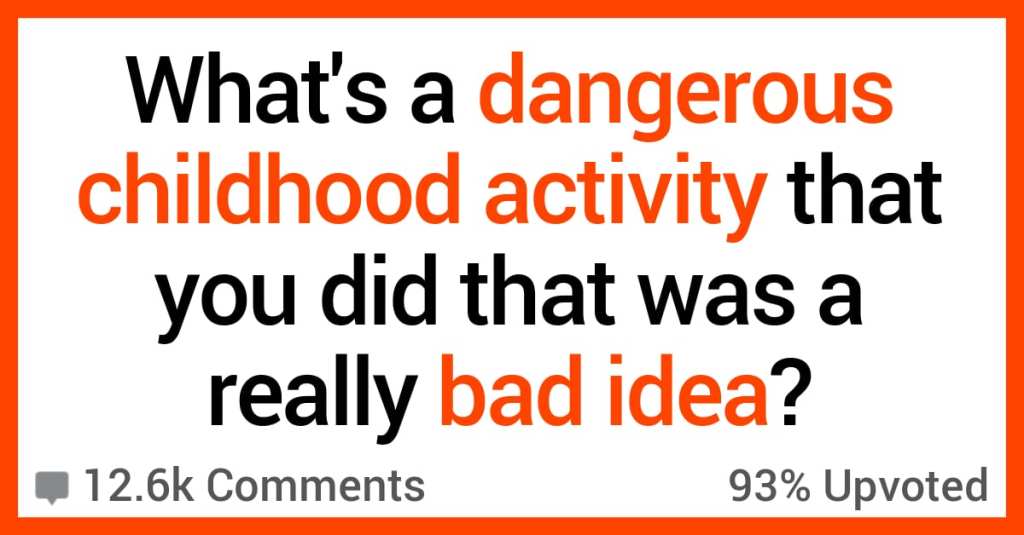 Oh, boy…it’s hard to believe that I survived my childhood without any really bad injuries when I think about the stuff we used to do on a regular basis.

We never thought twice about jumping our bikes off of crazy ramps, or riding our bikes down an old, two-lane county highway with trucks rumbling past us to go to the gas station.

And I bet a lot of you out there feel the same way.

AskReddit users shared the dangerous activities they did as kids that could have got them killed. Let’s take a look.

“My buddies and I restored an old tree house on the outskirts of town that was a good 30 feet in the air.

We had to rebuild the “ladder” to get to the platform and then used a rope to pull up materials.

We had a three tiered house by the time we were finished. Fun, but dangerous.”

“Previous owner of my childhood home left a bunch of random chemicals in the garage (he was into home improvement and stuff) and my siblings tool to playing “mad scientist”.

Several instances of unknown gasses spreading through the garage later and we’re still around.”

“When I was a teenager I decided to take up the hobby of fire arts.

I had a fire staff I spun, this thing called fire poi (big wicks on strings you swung around), fire fingers I made myself, and a Samoan fire knife I somehow convinced my dad to make me (half knife half wick which you spin around).

I even knew this trick where I’d use kerosene to light part of my hand on fire and use it to light my tools. My parents just indulged me. I guess they figured if I got hurt I’d learn my lesson.”

“For a little bit it was a middleschool fad to throw yourself off public buses as they were slowing down and do a roll on the sidewalk.

I smacked my midsection on a telephone pole and had bruises for weeks.”

“As fun as it really was, I am still surprised how more of us didn’t get seriously injured/killed on old school playground equipment.

I’m 29 but I’m old enough to remember when playgrounds were filled with gravel, not wood chips or shredded rubber. Holy hell.

Good thing small kids are shockingly resilient because I know I face planted on those rocks more times than I can count.”

“I used to rollerblade off the roof and onto the trampoline….it hurts to think about it now.

7. I remember these days.

“Before paint ball, we only had BB guns to shoot at one another.

Needless to say, there weren’t any fancy face masks or other protective gear.”

“I grew up in the deep country. We had over 100 acres of rocky, hilly land with several creeks, and I had free roam of it from the time.

I wandered several miles in every direction, climbed trees, rode horses and dirt bikes, waded in snake-infested water, got covered in ticks, stickers, and a few leeches. My cousins and I swam in creeks by splashing away snakes and huge snapping turtles.

We swung on vines and climbed up in decrepit old barns. I can’t imagine letting my kids have that kind of freedom in this day and age! Most of the time my mother had no idea where I was. I somehow never had many serious injuries.

Probably the worst was getting thrown off my horse and landing on my tailbone so hard it knocked me out. Or getting kicked in the head by a cow.”

“At 9, I boiled acid from a chemistry set and exploded the beaker spreading molten acid all over the room. Glass shards missed my eye by millimeters.

I built a “roller coaster” track down a steep hill when I was 10. The trial run nearly killed me.

A friend and I built a spectacular bonfire out of a whole neighborhood worth of discarded Christmas trees. We built it inside a large storm sewer. It smoldered for days sending smoke out storm drains for hundreds of yards. I barely got out of the storm sewer alive. As far as I know, nobody even called the fire department. Apparently smoke coming out of drains was passe’.

I rode my bike 45 minutes each way on rural highways with poor visibility and no shoulders in order to spend 10 minutes kissing a girl before her parents told me to go away. Age 14 was hell.

I stepped out into traffic in front of a bus in London England. I didn’t see the bus because I was a stupid American who looked the wrong way for oncoming traffic. I was pulled back to the curb by an anonymous hero who saved my life.”

“Talking to other random kids on MySpace and going to meet with them in real life.

We took trains and busses without our parents’ knowledge or approval. It could have ended up really bad but everyone was cool and normal.”

“When I was a teenager my friends and I used to organize these scavenger hunts in Downtown Chicago, but instead of finding things you had to do things instead.

We got the idea from Viva La Bam and it originally just started with 4 of us and a list of like 50 things and grew to like 35 people with a list of almost 200 things and thrift store trophy for the winner.

I did a lot of stupid things because of these scavenger hunts, because the list was ridiculous. Things like eating 6 raw eggs, eating a dollar bill, holding a conversation with a street sign for 5 minutes, crossing the street by weaving between cars during downtown traffic, jumping from stupid heights, etc. We even got kicked out of Water Tower Place for playing tag when the hunt got rained out.

The amount of stupid things that were done on that hunt by a bunch of dumb teenagers was amazing. I’m honestly surprised that not one of us was injured during this, with the exception of my friend Ryan who got some sort of aerosol burn on his nipple.”

“I had between 25 and 30 acres of land growing up in two separate states. My parents could have cared less.

There goes 8 year old me with sometimes a .22 rifle and sometimes just a stick wandering in the woods for hours alone. Next to the site of a rattlesnake roundup, in South Texas and near Tucson.

Never got bit but did meet coyotes (animal and human), javelinas, PTSD afflicted Vietnam vets and had all manner of adventures!”

“I used to play around in the houses that were being built in my neighborhood.

And dumpster dive in their big dumpsters full of rusty nails and other hazardous sh*t when I was like 7.

Did you do a lot of things when you were a kid that were wild, crazy, and dangerous?

Share your stories with us in the comments. Thanks a lot!