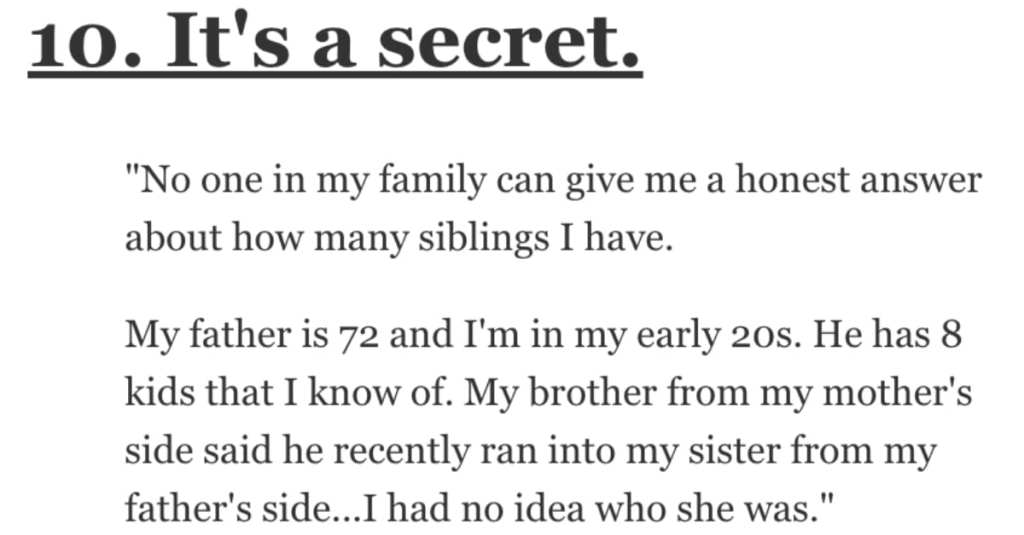 But, luckily for us, a whole bunch of folks on AskReddit were willing to go on the record and share the deepest, darkest secrets from their families.

“My grandfather was killed in a bar when my father was still a toddler. The official story was that he was murdered over a pinball game (back then pinball was pretty serious, I guess).

It wasn’t until recently my grandmother confessed, on her death bed, that my grandfather actually killed someone and buried the body, days before his own demise.

So he was actually killed in retaliation for a murder that he committed. My grandmother kept this secret for almost 65 years.”

“A male blood relative went to prison for drug dealing and major theft. While in prison he was diagnosed with Hep C, likely from sharing needles.

When he got out of prison, he r*ped his 13 y/o stepdaughter. There’s a high likelihood that he r*ped his other daughters – one died from a drug overdose and the other committed suicide.

He died in prison from Hep C complications and liver cancer.”

“It’s me. My dad never told his family I existed.

I was shameful, maybe he was more ashamed. After he died they found out about me and kindly asked me not to come to the funeral.

I get why he never told them.”

“As part of opening a home daycare, mom found somebody on the s*x offender registry with our family’s very unusual last name.

Mom called grandpa. He confirmed that he is related to us, he hadn’t seen him in decades, he didn’t know he had been convicted for statutory but thought that sounded about right.

We’re not supposed to ask about him again.”

“My dad gave a job to a cousin.

I remember as a kid that this cousin I’d never heard of just suddenly popped up out of nowhere without explanation but I was a kid so didn’t really think of it, but everyone made a big deal out of how great it was for my dad to give him a job.

I found out 20 years later that the cousin had been in prison for having a s*xual relationship with a student.”

“A year or two after her adoptive mother died, my mom went looking for information about her birth parents, and found that her birth mom and her husband had been gruesomely murdered by a drug cartel.

There was an article about their murder in Rolling Stone magazine that had gory pictures of their bodies.”

“My cousin, once removed (my parent’s cousin) was kidnapped, r*ped and tortured by a serial killer.

She was (after many days) dropped off near a running path with her neck slit. She lived (unlike the other 3) and she could lead the police to his home.

He is still in prison. As a child I heard whispering of it and didn’t find out the whole truth until I was older.”

“My dad’s cousin killed a dude and his 9 year old son in a cocaine rage in 1990. He was living in my parents’ basement at the time.

Investigators first questioned my dad, and then they found my cousin’s bloody shoes in the house. The dude used to babysit me and my siblings. I didn’t know any of this until I was almost an adult. He used to call me from prison on our shared birthday and it always gave me the creeps.

Stopped answering when I discovered the truth. My dad and grandma swear he is innocent but… I read into the case. He’s definitely not.”

“I found out 6 months before my dad died that he was a heroin addict earlier in his life. He was dying of liver disease and tried to overdose one night.

I didn’t live with him at the time but knew something was wrong and that’s when my mom and I went and found him on the floor of his bathroom with a needle in his arm.”

“No one in my family can give me a honest answer about how many siblings I have.

My father is 72 and I’m in my early 20s. He has 8 kids that I know of. My brother from my mother’s side said he recently ran into my sister from my father’s side…I had no idea who she was.

Most of the family members say they’ve lost track!”

“Dad’s cousin was a prominent Catholic priest known for his staunchly anti-LGBT views.

Well, it was quite the surprise when he was arrested trying to solicit a bl*wjob from an undercover cop at a gay bookstore in New Orleans.”

“I am actually the dark family secret.

All of my brothers and sister know but they don’t know that I know. They’ve kept the secret from everyone except one person, and that person told me.

My mother had a secret affair that resulted in pregnancy and my father raised me like I was his own. I sometimes contemplate about whether to tell my sons, but probably won’t.

I actually recalled having met the other father when I was really young but not since and not interested in meeting him now. Both of my parents have passed so I’m not going to make any issues out of it.”

As an adult my great grandfather immigrates to the US where he had multiple children, mostly women, who I’ve been told he s*xually abused for the majority of their childhoods. This was not spoken about until the last of his children were on their death beds.

My great grandfather supposedly got involved with the Italian mafia at some point, robs a bank with 2 other family members (my young grandmother supposedly the get away driver) and eventually gets caught and all go to prison for a time (with the exception of my grandmother). All are released from prison and all die of natural causes, supposedly.

Talk to us in the comments, please!