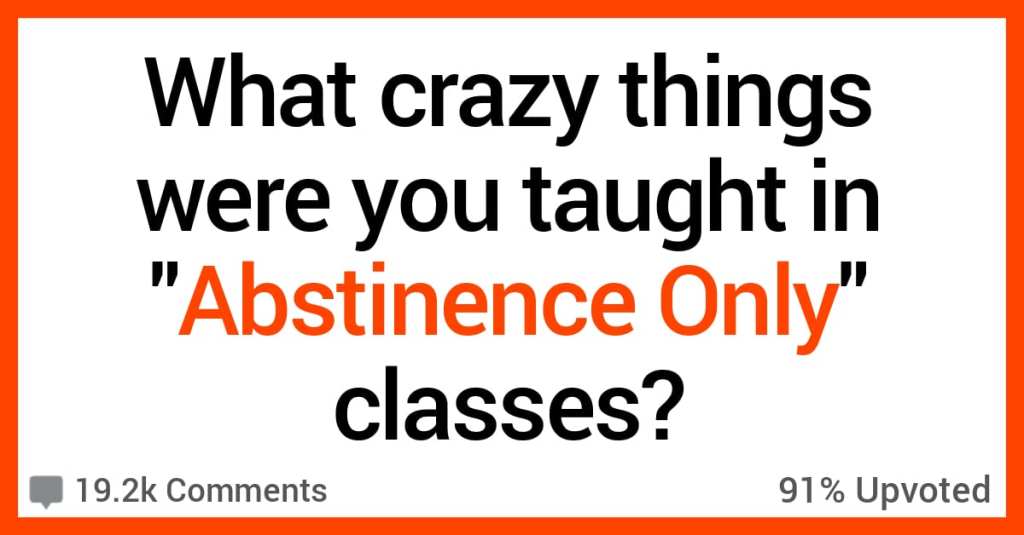 Isn’t it kind of crazy that some schools still teach abstinence only s*x education to young people across the country?

It’s totally unrealistic to think that kids aren’t going to be experimenting with each other, so why not teach them how to be safe and healthy?

I just don’t get it!

Folks who received abstinence only s*x education talked about the weird things they learned on AskReddit. Here’s what they had to say.

“I just remember this video I was shown in my church youth group of a guy holding a brick over a teen’s head and saying there was a 1% change he was going to smash his face in.

He was trying to illustrate how the 99% effectiveness of birth control doesn’t seem so good when put in different terms, but ya know, those are the actions of a psychopath.”

“We had an assembly every year in high school that discussed abstinence.

I was told that every time I had s*x it released a chemical (maybe Seratonin?) that you needed to bond with your baby.

There was a finite amount of this and if you had s*x too much before marriage it would waste this chemical and you risk not bonding with your baby appropriately.”

“Girls and boys had to go to different rooms during s*x-ed. The girls were told that “abstinence is the best option because s*x is painful”. The boys weren’t told that.

I understand that s*x can be painful for some people, but pretending s*x isn’t a source of pleasure at all for women is flat out wrong and depressing.”

“Nuns told us that French kissing in a bathing suit would get you pregnant.

Also, they said you shouldn’t go on a date to a restaurant that uses white tablecloths because that looks like sheets which would make your date think of bed and you’d end up having s*x.”

They weren’t allowed to mention birth control or condoms so when people asked how do you prevent pregnancy we were told “you can’t.”

Two girls in my freshman health class were actually Sophomores and taking the class late because they were out having babies when they should’ve taken it.

So…that’s how well the system worked.”

“We were told that hickeys kill you because they cause your veins to burst.”

“They tried to scare us.

Condoms aren’t effective, chances are super high you’ll get an STD or get pregnant, watch this horrific slide show of worst-case-scenario STDs and then watch this video of crying women who regret the ab*rtion they got after getting pregnant from their first s*xual encounter.

But most topics were just vaguely circled. Some super uncomfortable, young youth pastor came and “educated” us, but he would only refer to genit*lia as the “underwear zone.”

We were able to write questions on a slip of paper to be answered anonymously, but he only read about 10% of them and deemed the rest inappropriate.

Shocker, we had a lot of teenage pregnancies.”

“We were shown a video where a lady said she could tell if a girl was a virgin just by looking into her eyes.

The implication was that premarital s*x causes your spirit to die so that you become just a shell with nothing to offer.”

“That a woman’s role in life is to wait for a husband, then dedicate her life to his wishes.

Even as a kid, I knew that was f*cked.

The boys were in a separate class, taught by a doctor, and actually learned puberty. The girls were taught by the religion teacher. We only discussed “respecting our husbands”, nothing else.

That’s when I stopped being Catholic.”

“Condoms have microscopic holes and don’t actually prevent pregnancy and definitely will not stop you from getting AIDS because the virus is so small it will magically go through the latex.”

“I was taught in school that self pleasure was also a sin.

So as a young girl discovering her body, every time I mast*rbated, I’d cry because I thought I was going to Hell.

I don’t know how many times I prayed to God asking for forgiveness.”

“We had to watch a video made by Pam Stenzel, who had the typical “my mother was going to get an ab*rtion but was saved by the grace of god” story.

The only things I remember hearing are that birth control never works, every person you ever sleep with will have an STD, you will inevitably get pregnant, and that condoms ruin relationships.

Also, ab*rtion is bad, but how dare you put your child up for adoption because you are inevitably giving them a life without love and they will be lonely forever.”

Do you remember anything about what you learned during s*x education?

If so, talk to us in the comments. Thanks!