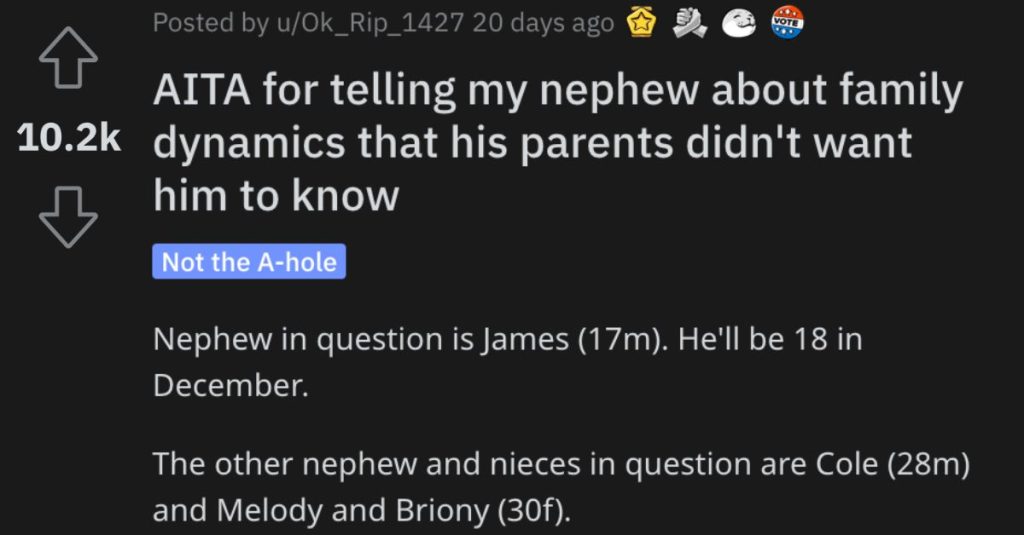 Every family has secrets…

Some are big, some are little…and some are meant to be kept from certain individuals.

So what happens when someone spills the beans to a family member?

Check out this story and see if you think this person went too far.

AITA for telling my nephew about family dynamics that his parents didn’t want him to know?

The other nephew and nieces in question are Cole (28m) and Melody and Briony (30f).

My sister is the biological mother of Cole, Melody and Briony. Their father died when the kids were 8 and 10. My sister married James’ dad 15 years ago and she never formally adopted him but did raise him as her son.

There was a lot of tension and conflict in the home and Cole, Melody and Briony all moved out immediately upon graduating/turning 18. The relationship with my sister then ended. It also ended with James and his father. I stayed in contact with the three of them though and have always known where they are and that they are not interested in reconciliation.

Ever since my sister took on James as her own, they have allowed him to believe she is his biological mother and that the other kids are his biological siblings and it was only a few years ago I realized he believed they shared the same father as well. My sister and her husband have always encouraged James to believe that his siblings love and want to know him and that they will have a relationship one day. He has been craving that more in the last 2.5 years or so.

He has mentioned it a number of times. Some family members and I tried to convince his parents to at least tell him the biological truth so he’s not faced with it from people who will not care about cushioning his feelings or making sure he’s okay. They refused. My sister said there is no biological truth. They are the parents and all four are their kids and it ends there.

James has been talking to me a lot about finding his siblings and being excited to have them back in his life. He mentioned how maybe he could reconcile their parents and them too. And how he hoped to prove they were never replaced by him and that he knows it must have been hard to have a baby come into the family so much later. He believed that was what the estrangement was about. What his parents told him.

I decided he needed to know after my sister and her husband refused yet again to talk to him. So I was honest. My sister wasn’t his bio mom and his dad was not their bio dad.

They were not blood siblings. I told him I loved him and it didn’t make him less of my nephew but I didn’t want him blindsided by not getting the response he was expecting. He asked me if they would actually want a relationship with him. I told him no. He confronted his parents about the lies and the way they were setting him up.

My sister called and told me I was an a**hole and stepped out of my place by telling him what I did without her and her husband’s consent. I can see my nephew (James) is struggling and trying to work out his head after the truth and it makes my sisters words hit harder.

One person said they are NTA and that this kid deserved to know the truth.

And this Reddit user agreed and said she never even adopted him so she has no room to decide here. 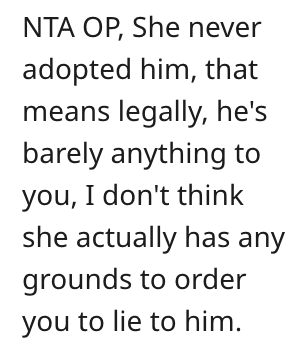