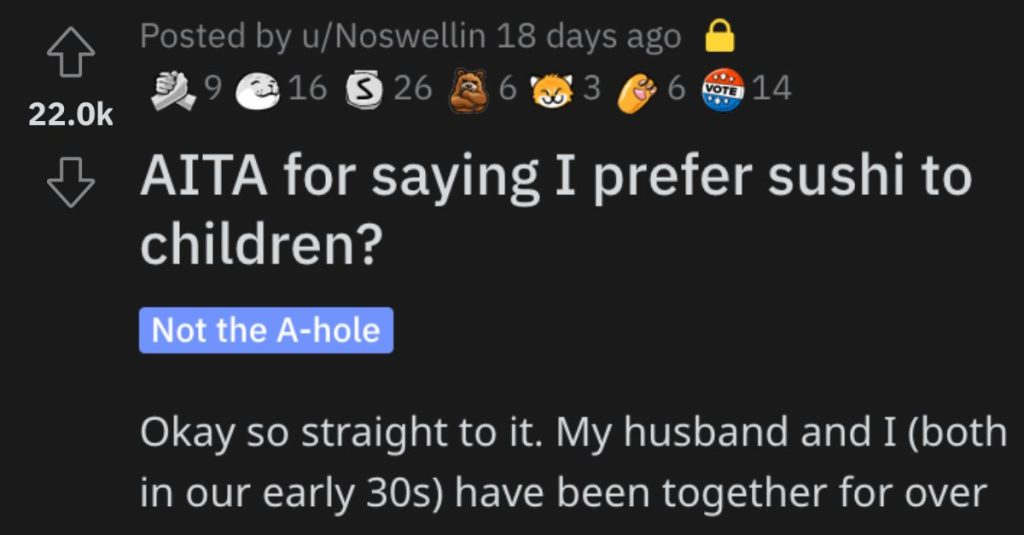 Person Says They Prefer Sushi to Children. Were They a Jerk?

I’m with you on this one, lady!

Hey, I like kids just fine but sushi? You can’t beat it!

But those kinds of comments don’t always sit well with people.

And this woman wants to know if she’s an a**hole for saying it OUT LOUD.

AITA for saying I prefer sushi to children?

“Okay so straight to it. My husband and I (both in our early 30s) have been together for over a decade and made the decision to not have kids.

I like kids, I have nieces and nephews, we just don’t want them for our own reasons. He had a vasectomy which only a few people know about. Our families are aware we don’t want kids as they’ve asked this before during different major life events (our wedding for instance).

We recently bought a 3 bedroom home with a nice yard in a nice area. Excited to show our new home to family and friends (major upgrade to our previous home), we hosted a housewarming.

During the party, one of my sibling in laws (Alex) made a few indirect comments about all this space, and kids would love it in our house etc. Eventually they asked point blank when we were having kids.

I made a lighthearted joke about it, which is my go-to for this question. “Oh, well, I like sushi too much to have to give it up for a pregnancy. Plus not drinking for pregnancy and breastfeeding? No thanks!” I tried to make it very light hearted and laugh it off. Most people just laughed along.

That seemed to anger Alex and I was told “children are a joy, and a good mother puts her kids before everything else”. I agreed, ‘children are a joy, I like spending time with the nieces and nephews, and obviously I can’t be a good mom if I chose sushi over kids so I just won’t be a mom’ (paraphrased).

Still trying to brush it off in a gentle way because I’m not trying to start a fight by telling them to stop asking in front of everyone because I know my tone will be seen as rude and abrasive.

We move on, but Alex is still annoyed and making little comments in their group about how flippant I am about it and how when it finally happens, then I’ll understand. My husband heard this and said jokingly said “well, if she gets pregnant, that’ll be a problem for the divorce lawyers.” That seemed to p**s them off more but they stopped.

With holidays coming up, we have not been invited to Alex’s usual Halloween bonfire. When husband spoke to his parents, they told him Alex was annoyed we were so careless and callous about our childfree status and to say what we did and they realized we had taken permanent steps to ensure we never had kids.

That we know they had to do IF to have kids etc. And we are AHs to just not care. I feel bad because they did do IF and lots of fertility treatments to have their kids, and even then they still had a few miscarriages. I can’t imagine wanting kids and struggling to have them and then deal with miscarriages. But at the same time, I’m so tired of justifying living my life how I want.

Well, that’s one way of looking at it…here’s what Reddit users said about this. 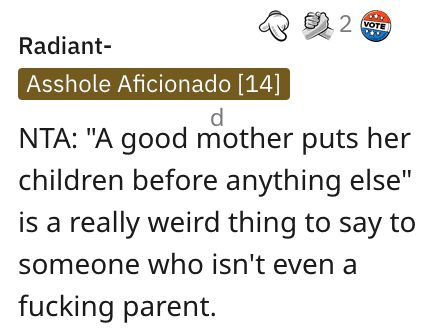 And this person who is a parent said that this woman is NTA at all. 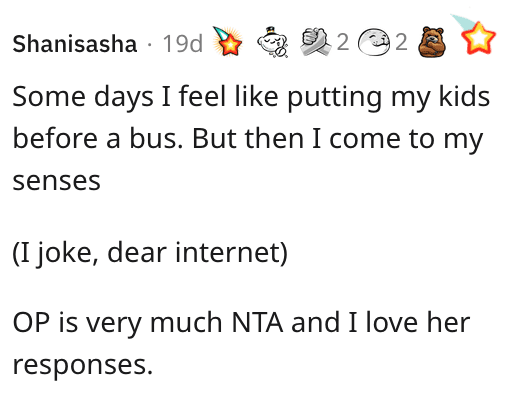 Another individual made a very good (and sarcastic) point. 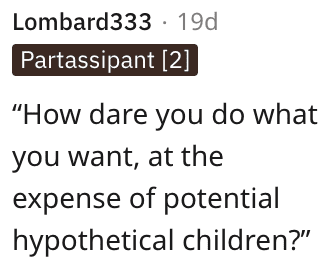 Finally, this reader made some good points about this whole world of choosing to have kids or not. 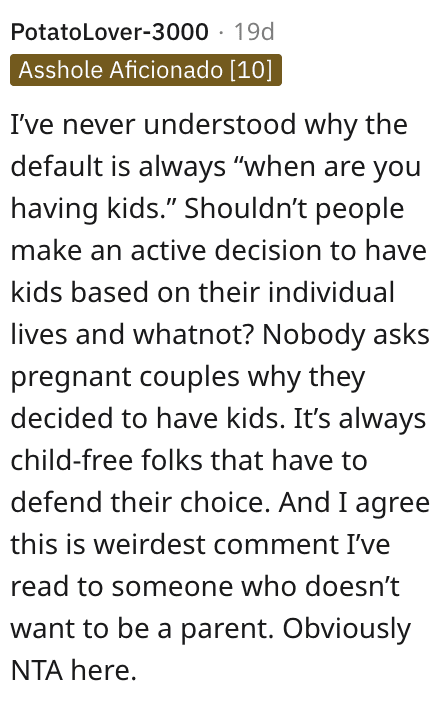 Or was this no big deal?

Fill us in in the comments!