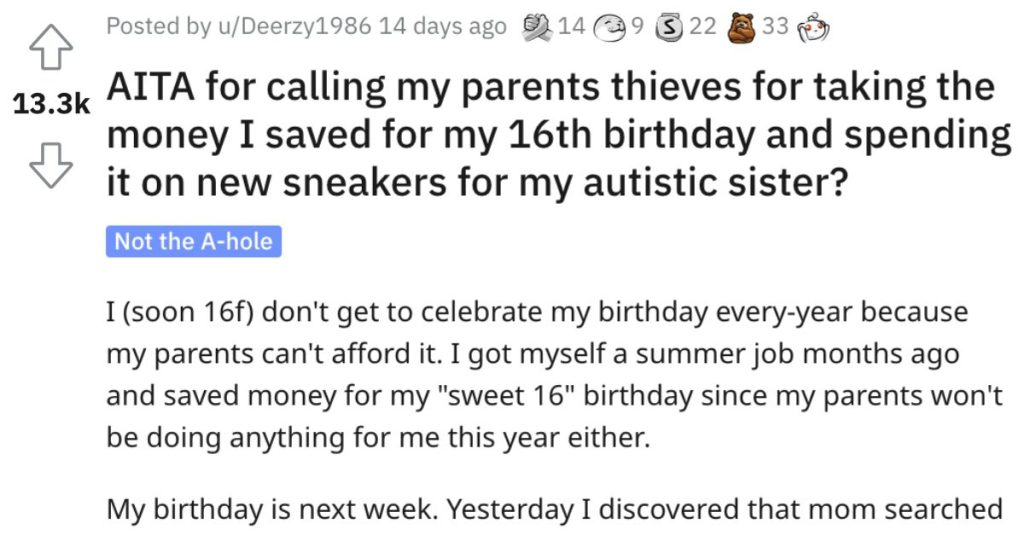 She Accused Her Parents of Being Thieves. Was She Out of Line?

I mean, have you ever called your parents thieves?

I know I haven’t!

But that’s why Reddit’s “Am I the A**hole?” page is always filled with gems!

Let’s see what happened in this story…

AITA for calling my parents thieves for taking the money I saved for my 16th birthday and spending it on new sneakers for my autistic sister?

“I (soon 16f) don’t get to celebrate my birthday every-year because my parents can’t afford it. I got myself a summer job months ago and saved money for my “sweet 16” birthday since my parents won’t be doing anything for me this year either.

My birthday is next week. Yesterday I discovered that mom searched my room and took the 120$ I saved and hid under my bed like she always does. I called her and she said she was keeping it safe and we’ll talk after she get home since she and dad and my autistic 14yo sister were out.

I waited til they got back and my sister started yelling cheerfully telling me to look at the new sneakers my parents got her. I asked mom for my money but she said she spent it on new sneakers for my sister. I was like what??? My dad said my sister saw, liked, and wanted the sneakers but they didn’t have money to buy it and stop her from having a meltdown in the middle of the store and refusing to leave the store without them.

I angrily told them that money was saved for my upcoming birthday party. He promised he’ll pay me back next month then I can have my birthday party and invite friends over. I told him my birthday isn’t next month my friends will laugh if I tell them I postponed it he replied that I should reconsider who I’m friends with then.

He has a short temper and I obviously pushed him to his limit when I said no and kept asking them to return the sneakers. He loudly said “NO!!!” And I lost it and said that they are both thieves and I h**e them both for stealing my money and ruining yet another birthday for me.

He yelled at me and said “NO YOU..ARE..GETTING..ON..MY LAST..NERVE..AND I AIN’T GOING TO TAKE YOUR SH!T NO MORE!!! NO BIRTHDAY PARTY FOR YOU(pointing at me with his finger) NOT NEXT WEEK NOT NEXT MONTH CAUSE OF WHAT YOU JUST SAID AND YOU’RE GODD**N GROUNDED NOW GET TF OUT MY FACE AND STAY GONE TIL I TELL YOU OTHERWISE”.

Mom just looked at me sternly approving of his “message”. I ran upstairs and Dad shouted after me that I was way out of line and need to be taught some manners for calling them thieves to their face.

I’m grounded now for calling them that. I didn’t get my money back but did get called an overprivileged spoiled brat for having little to no consideration for my sister’s struggle and acting so selfishly and throwing a 3yo tantrum over a party that they are no longer allowing me to have because I called them thieves.

Check out what folks on Reddit had to say about this.

One reader agreed with the young woman who wrote the post and said that her parents are indeed thieves. 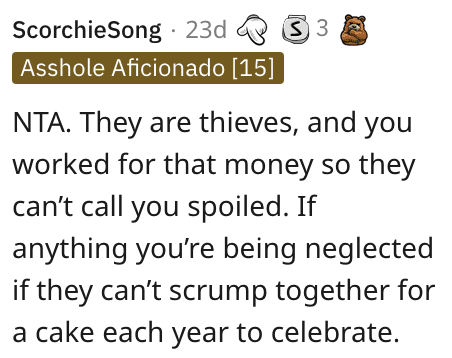 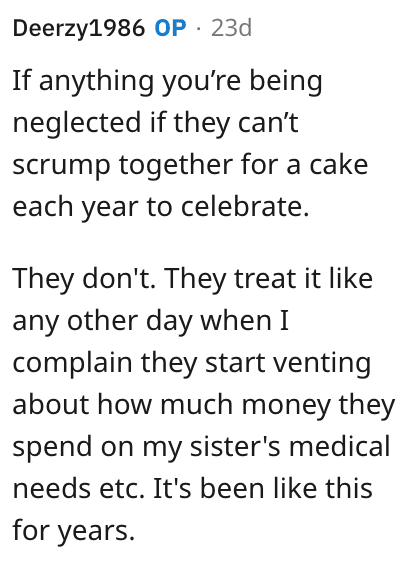 And another individual said that these parents are straight-up VILE. 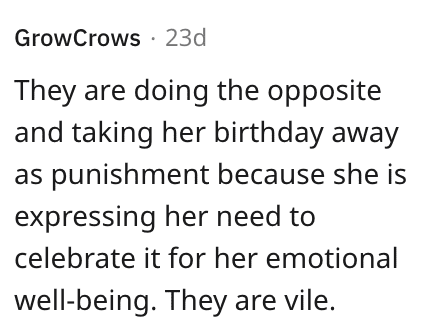 Finally, a person who grew up in a household with not much money said that their parents never resorted to anything like this and always made sure that the kids’ birthdays were special. 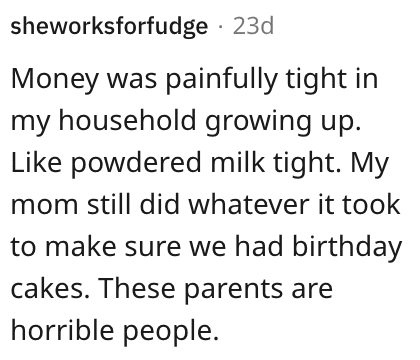