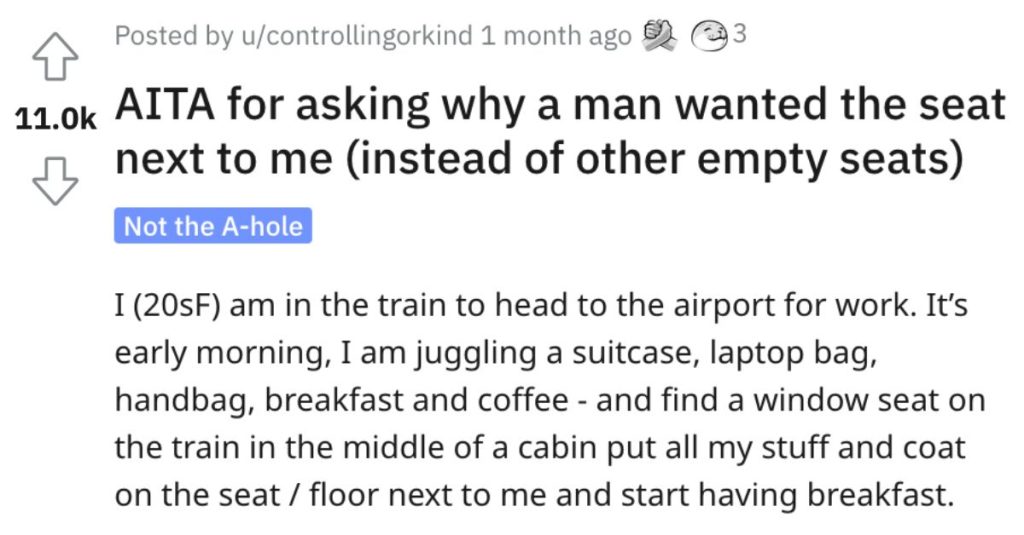 She Asked a Guy on a Train Why He Chose a Seat Next to Her Instead of Other Empty Seats. Was She a Jerk?

This kind of stuff drives me insane…

When I’m sitting on public transportation or I’m at the movie theater and someone picks a seat RIGHT NEXT TO ME instead of choosing any of the numerous empty seats that are away from me.

So I have some sympathy for this woman. Check out her story and see what you think…

AITA for asking why a man wanted the seat next to me (instead of other empty seats)?

“I (20sF) am in the train to head to the airport for work. It’s early morning, I am juggling a suitcase, laptop bag, handbag, breakfast and coffee – and find a window seat on the train in the middle of a cabin put all my stuff and coat on the seat / floor next to me and start having breakfast.

Train is not empty, but certainly not busy, all the rows have one person sitting in it, generally on the window seat, while 80% of the aisle seats are free. About a minute before departure a man comes in, walks through the cabin and stops in front of me – asking to sit down. I

look confused but start moving things to free up space, sitting on top of my coat, knees almost in my ears to be able to squeeze my suitcase under my feet, put away the breakfast I won’t be able to have and have my two bags on my lap.

Train has departed already, and the man is still standing there (instead of sitting down in the empty seat behind him). When he finally sits down next to me, I ask him: why this seat. The rest was empty and would have been easier and faster for both of us.

He then goes on a rant that people should not be occupying seats for stuff instead of people – and gets enraged when I say I agree if the train is busy, but in this case it’s nearly empty…

It was an awkward rest of the trip, where I was very tempted to spill my coffee on him – but now I wonder if I was an a**hole for my reaction. Am I?”

This person said she was NTA and that this guy probably was thinking about hitting on her. 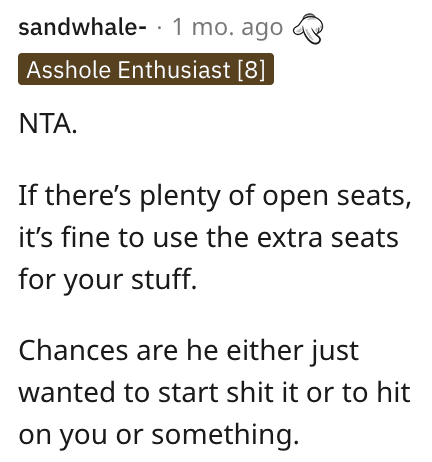 And this reader had some good advice for women on public transit. 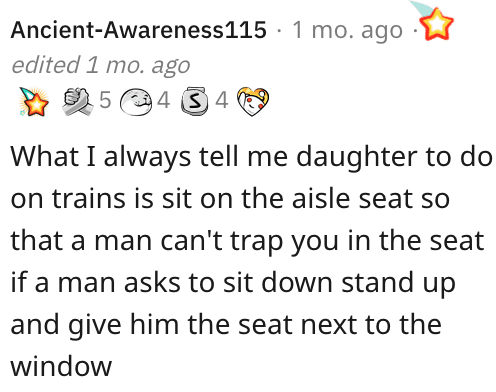 Another individual agreed that this woman was NTA and added that she was nice to let the guy continue to sit there. 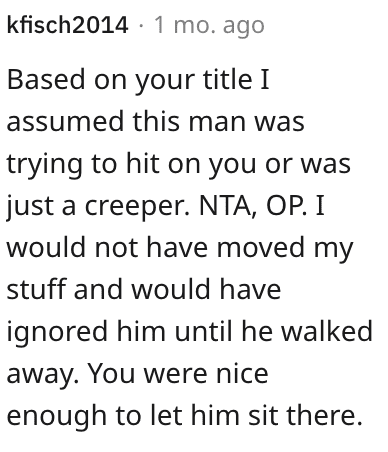