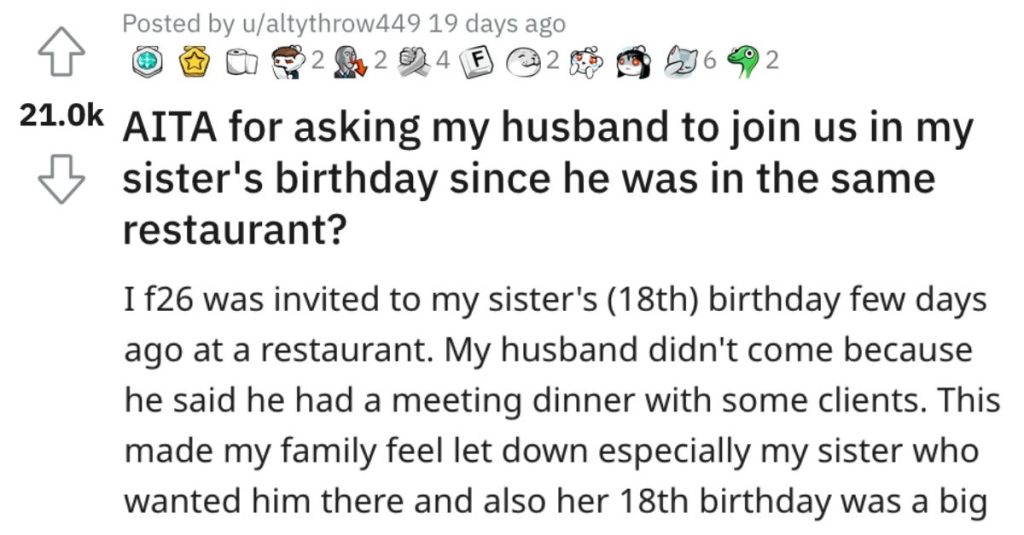 She Asked Her Husband to Join Her Sister’s Birthday Celebration Since He Was in the Same Restaurant. Was She Wrong?

When you hear someone say this, it’s usually a good thing.

Well, let’s just say that it led to some problems.

Take a look at her story and see what you think.

AITA for asking my husband to join us in my sister’s birthday since he was in the same restaurant?

“I f26 was invited to my sister’s (18th) birthday few days ago at a restaurant. My husband didn’t come because he said he had a meeting dinner with some clients. This made my family feel let down especially my sister who wanted him there and also her 18th birthday was a big deal to her obviously.

To my surprise, When I arrived I noticed that my husband was having his meeting at the same place, his table was right in the corner and he had about 4 men sitting with him. My parents and the guests saw him as well. I waved for him and he saw me but ignored me. He obviously was as much as surprised as I was.

My parents asked why he didn’t even come to the table to acknowledge them after the cake arrived. I got up and walked up to his table. I stood there and said excuse me, my husband was silent when I asked (after I introduced myself to the clients) if he’d take few minutes to join me and the family in candle blowing and say happy birthday but he barely let out a phrase and said “I don’t think so, I’m busy right now”.

I insisted saying it’d just take a couple of minutes and that it’d mean so much to my sister. He stared at me then stares awkwardly back at his clients. They said nothing and he got up after my parents were motionning for me to hurry up.

He sat with us while my sister blew the candles and cut the cake. My parents insisted he takes a piece and join us in the selfie but he got up and walked back to his table looking p**sed. We haven’t talked til we met later at home.

He was upset and starts scolding me in front of my parents saying I embarrassed him and made him look unprofessional and ruined his business meeting. I told him he overreacted since it only took few minutes and it was my sister’s birthday and my family wanted him to join since he was literally in the same restaurant. He called me ignorant and accused me of tampering with his work but I responded that ignoring mine and my family’s presence was unacceptable.

We argued then he started stone walling me and refusing to talk to me at all.

FYI, I didn’t have an issue with him missing the event, but after seeing that he was already there then it become a different story.”

One person said this was bad judgment and she shouldn’t have even gone over to her husband’s table. 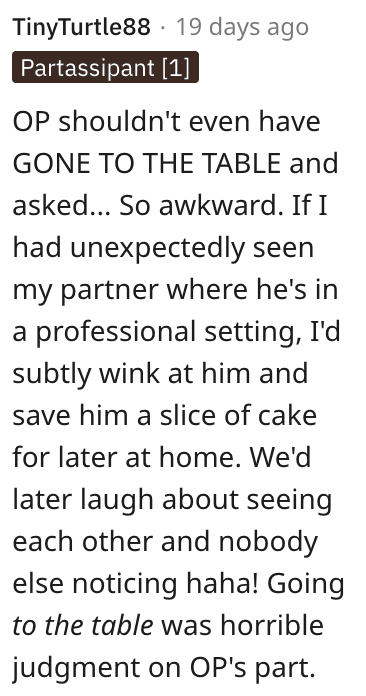 Another reader said she should’ve taken a hint and she made him look unprofessional.

And this Reddit user said everyone sucks here and this situation could have been avoided.