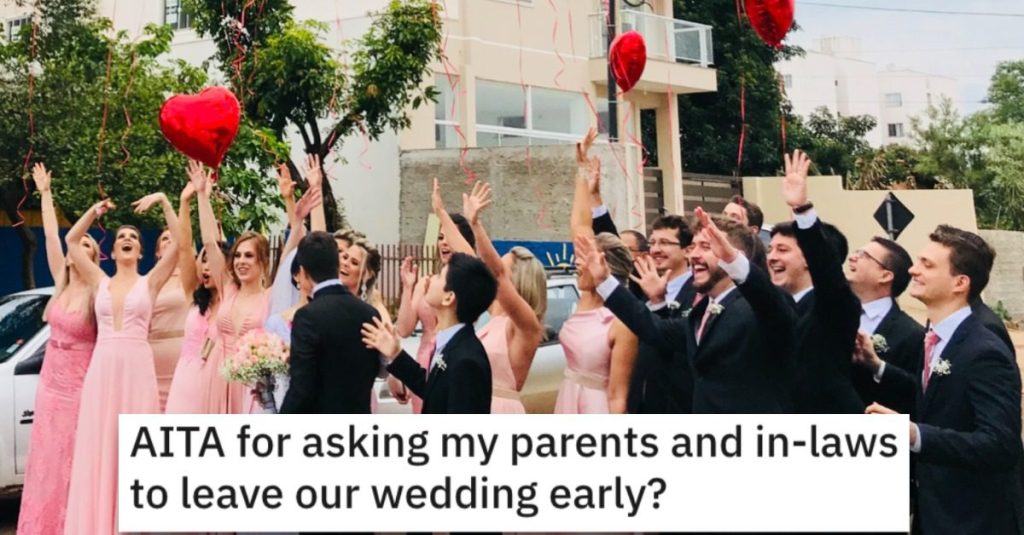 She Asked Her Parents and In-Laws to Leave Their Wedding Early. Was She Wrong?

Have you ever been to a wedding where certain people were asked to leave at a certain time?

I’ve definitely been to weddings where older people and kids left earlier than the folks who wanted to party late into the night, but specifically being asked to leave?

Check out this story and see if you think this woman acted like an a**hole to some of the guests at her wedding.

AITA for asking my parents and in-laws to leave our wedding early?

“I officially tied the knot last week! Not sure how, but I convinced the coolest guy in the world that I’m tolerable enough to tie down for life. Super shocking.

Thankfully, everyone accommodated the fact that we didn’t want children present at our ceremony or reception. The thing that DID receive some pushback was our request that unless you were explicitly invited to stay then everyone needed to be out of the reception venue by 7pm.

Those who were asked to stay were mostly just mine and my husband’s friends. As much as I love my parents, siblings, and new in-laws, I did want to partake in a few “adult substances” and wasn’t really interested in them bearing witness to poppers and other things getting passed around.

We had been with them all day and would be seeing them the next morning as all of us were staying at a place nearby and had plans to grab breakfast together, so I didn’t see it as a problem.

At that point, I had already had a few drinks so after some back and forth about whether they really had to head out, I basically said something to the effect of “if you wouldn’t feel comfortable spending a night out with us at a gay bar, you should probably leave.”

The space cleared out pretty quickly after that, and we did our thing with our friends. It was a wonderful end to a wonderful night. My dad, however, didn’t show up for breakfast the next morning and my sister tipped me off that my mom and my mother-in-law weren’t happy with my comments.

Let’s take a look at what Reddit users had to say about what happened.

This reader said that this woman is an a**hole and that thsi was rude.

Another person said that this kind of party probably should have taken place before the wedding and that she’s an a**hole. 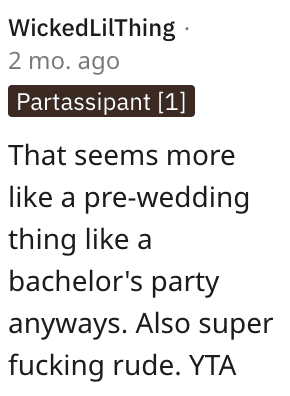 And this Reddit user also said she’s an a**hole and they shared their own story about how they did something similar without offending anyone.