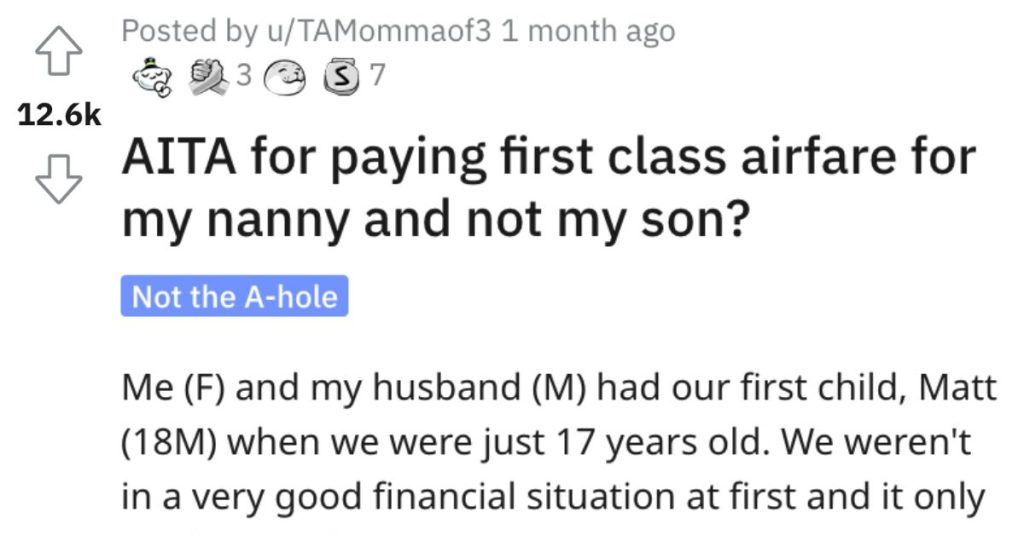 She Bought a First-Class Ticket for Her Nanny but Not for Her Son. Was She Wrong?

Son…go sit in the back with the peasants…

Read this story and see if you think this woman was a jerk for not letting her son fly first-class.

AITA for paying first class airfare for my nanny and not my son?

“Me (F) and my husband (M) had our first child, Matt (18M) when we were just 17 years old. We weren’t in a very good financial situation at first and it only got better when Matt was 9.

Currently, we both work well-paying jobs, buy a spacious home, and have our luxuries. We had two more children (8M and 5F), as we cannot stay at home all the time, we hired a nanny, May (45F) to take care of the little ones.

Matt had a complicated personality change at age 11, we put him in private school and maybe the contact with other teenagers brought out a selfish and elitist side of him. We tried our best to try to improve it, but with the onset of adolescence and stubbornness, it just seemed to get worse. It got better when my husband and I decided that at age 16, he would work part time so he could start taking financial responsibility and that seemed to give him a reality check as we cut our support on his perks.

This year, after the worst period of the pandemic, my husband and I decided to go on an international trip and instead of giving May a vacation at home, we decided that we would take her (not going to work) and pay for everything, (I don’t live in the US) .

Matt, on a random day, overheard me talking to my husband that I was planning to pay for a first class seat for May and her son for her to enjoy like we did. He asked why we should do this, we were already paying for everything, let her go economy class if she can’t afford first class.

I was shocked, I said that it was mean to say this and that she was an important person for our family, who gives up having time for her own child to take care of mine. It’s the least I can do.

He still stood his ground, so I said if he sees it that way, I said I’d buy him an economy seat and he’d have to turn around to pay for an upgrade for him to see how privileged he is to have parents who can pay. He nodded, thinking it was a joke even though I said it wasn’t.

As the months went by and I warned him that his ticket was economic and he didn’t believe it.

On the day of the trip, like a shocked pikachu, he was startled when he realized I told the truth. He threw a tantrum in the middle of the airport, saying that 10 hours of travel would be very uncomfortable. I just replied: You had 6 months to gather, you’ve been warned.

The flight was ok, but Matt was outraged the entire trip, saying it was almost torture and that we had gone too far.

My husband agrees with me, but my parents said I went too far doing this.

Let’s see what Reddit users had to say about what happened.

This person said she’s NTA at all.

Another individual agreed and said that he’s lucky his mom took him on vacation at all. 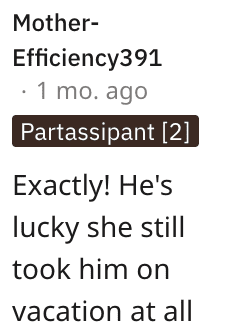 And this reader said she’s NTA and that they hope her son learned a lesson. 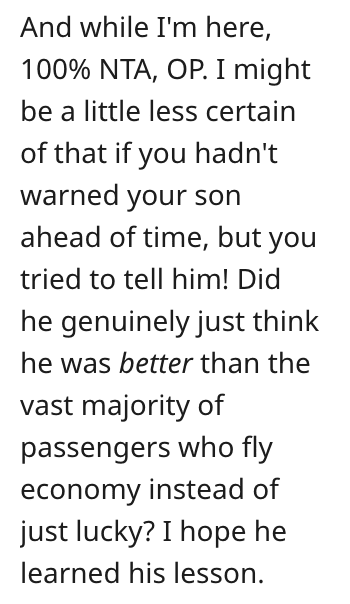