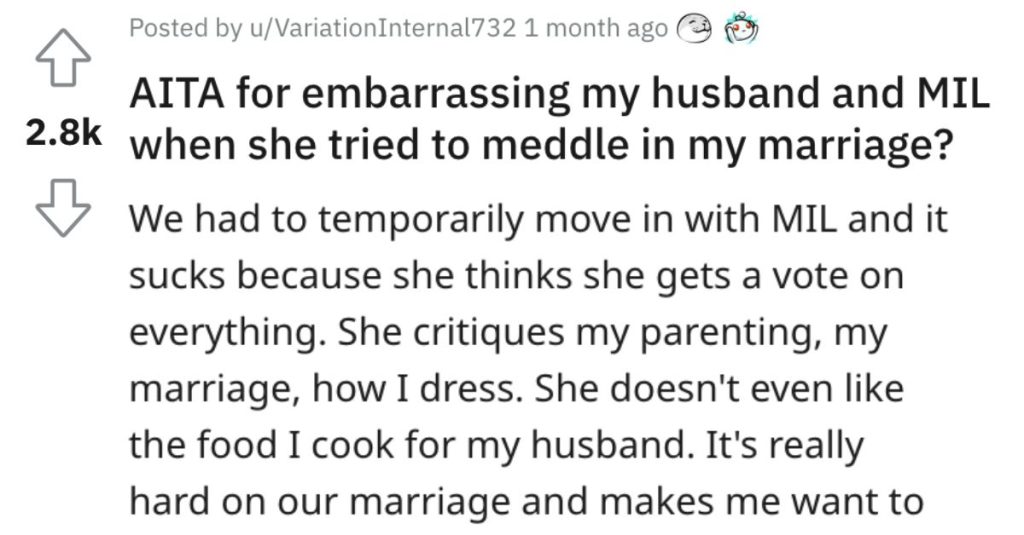 Mess around and find out, right?

Well, the actual saying is a little more graphic than that, but you get the point: sometimes, people who mess around with someone else get put in their place.

And it sounds like that’s what happened when this woman embarrassed her mother-in-law and her husband when the MIL tried to get involved in her marriage.

Read on and decide if you think she acted like an a**hole.

AITA for embarrassing my husband and MIL when she tried to meddle in my marriage?

“We had to temporarily move in with MIL and it sucks because she thinks she gets a vote on everything. She critiques my parenting, my marriage, how I dress. She doesn’t even like the food I cook for my husband. It’s really hard on our marriage and makes me want to get the f**k out of here.

Recently my husband and I had a pretty big fight. I’m aware it is immature that we fought loud enough MIL could hear, but I was just heated because he played a “prank” and squirted me with the hose through a window while I was using the toilet, and I felt so degraded and disrespected.

MIL decided to butt in and tell us how much our marriage sucks. she said I’m so miserable and uptight that if she was married to me she would cheat, and she feels bad for her son for having to be with someone so miserable. She said I should work on myself because no man is going to put up with that.

I asked if she would like to be married to her son and she just rolled her eyes. Now I might be the a**hole here, but I said I actually don’t think she would. If they were two random people who met on the street, she would 100% say he isn’t good enough for her.

I’ve seen the men she is with. Her standards are sky high, so she should shut the f**k up. I could see my husband was mortified. I know he already has some insecurities.

I then said I didn’t even want her advice because she cheated on her first husband. MIL told me to f**k off and said I have no idea what happened in her first marriage. I might also be the a**hole because MIL’s stepkids heard this and now they have more s**t to talk about her.

After they left MIL called me a misogynist and asked if I seriously thought her first husband never cheated on her, and said I need to mind my own business. Her husband also yelled at me about how I shouldn’t be saying anything when I live in their house.”

This reader made it clear: EVERYONE SUCKS HERE! 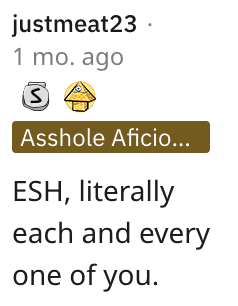 But this reader said she was not an a**hole and that she refused to act like a doormat.

Another individual said her husband deserved to be told off like this.