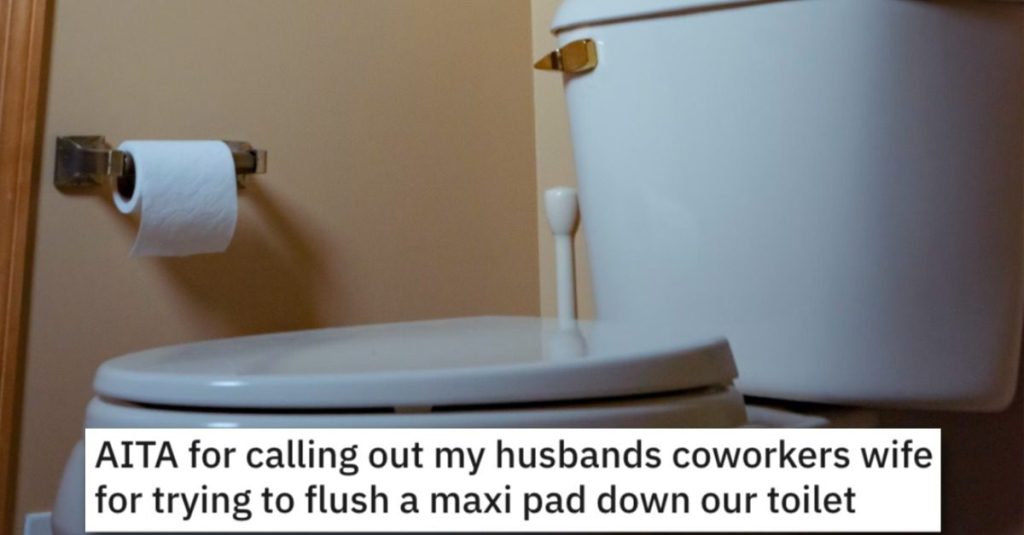 She Called a Woman Out for Trying to Flush a Maxi Pad Down the Toilet. Did She Act Like a Jerk?

This lady sounds pretty fired up!

But now it’s up to you to decide if she acted like a total a**hole or if she was justified in her actions.

AITA for calling out my husband’s co-workers wife for trying to flush a maxi pad down our toilet?

“I’m still pretty mad at the whole ordeal. My husband’s coworker and his wife are both mad at us, and think I humiliated her but I think her lack of common sense is what did it.

My husband and I recently hosted a cookout at our house for his coworkers, he gets along pretty well with most of them and enjoys hosting. Coworkers wife Julia goes to the hallway bathroom, comes back. I end up going after her, and notice the toilet is clogged and starting to overflow.

Something large and white is stuck, I use the plunger to unclog it and lo and behold, a very large bloody maxi pad. Julia was the last person to use the bathroom, so I come out and asked her if she tried to flush a pad down the toilet. She got embarrassed and said yes, and I told her she needed to go clean up the mess she made.

There was water all over the floor, with particles of her pad and blood everywhere. I asked her if no one ever taught her not to flush a pad, we have a septic tank and they cost thousands to repair. You don’t flush pads, especially not the extra large ones. Its not like she tried to flush a panty liner or something.

Julia cried and her husband yelled at me, but who does that? Especially at someone else’s house? Husbands two female coworkers came to my defense, and pretty much said it was stupid of her to do that.

Julia half a**ed cleaning up her mess, and her and her husband quickly left. All of their coworkers think Julia shouldn’t have done that, but my husband and his coworker are having a whole feud about it.

AITA for calling out my husbands coworkers wife for trying to flush a maxi pad down our toilet?”

One person said she’s NTA and this could have cost her a whole lot of money. 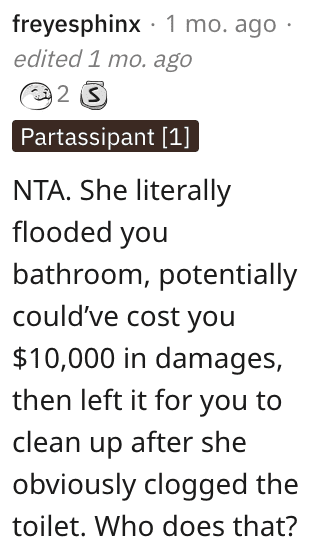 Another reader also said she’s NTA and that the woman should be embarrassed for what she did.

And this individual also said she’s NTA and asked a good question…what is wrong with people?!?!