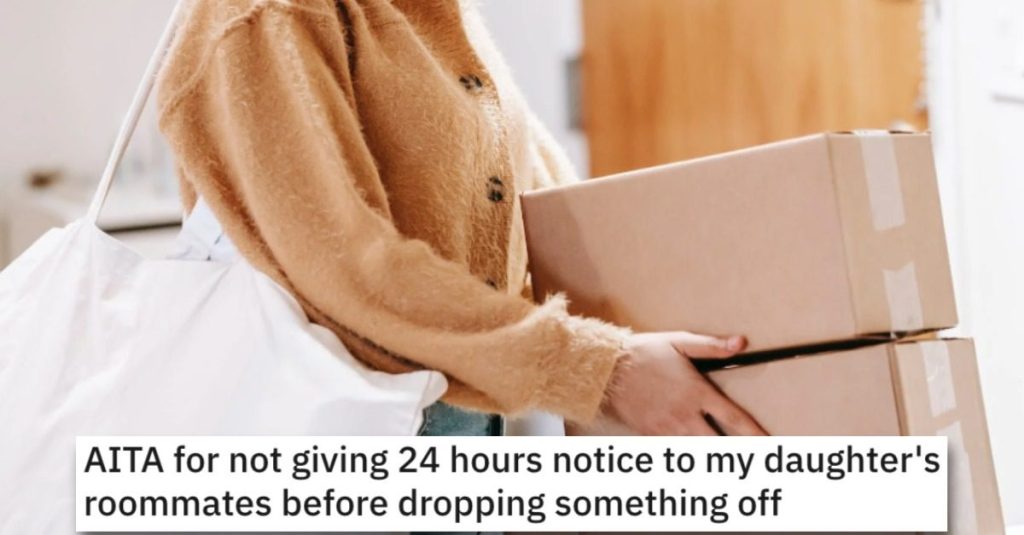 She Didn’t Give 24 Hours Notice Before She Dropped off Something at Her Daughter’s Place. Is She Wrong?

I’ve definitely heard about the 24-hour notice from landlords, but for someone’s parents?

That’s a new one!

But, hold up! Because this parent also owns the condo in question…

And she took to Reddit’s “Am I the A**hole?” page to ask the readers there if she was out of line for not adhering to that timeframe when it came to her daughter’s roommates.

Hmmm, let’s see what she had to say…

AITA for not giving 24 hours notice to my daughter’s roommates before dropping something off?

“I am a mother to a 20-year-old daughter. She is a junior in college and attends school in the same city that we live. My daughter and two of her friends live in a condominium that I own.

Her friends pay below-market rent while my daughter does not. The condo was inherited from my parents and it was their intent that I would pass ownership of it to my daughter when she is mature enough to own her own place. My daughter, husband, and I are in agreement that she will take over ownership of the condo when she is out of school and financially independent.

Earlier this week, my daughter mentioned that she had run out of some household supplies and would have to set aside time to go shopping before the end of the week. My daughter’s schedule has been especially rough lately, as she has picked up extra shifts at her part time job due to short staffing. Wanting to be helpful, I offered to pick up the supplies for her and drop them off at her place. She accepted.

The next day, I picked up the supplies and took them to the condo. I knew my daughter was in class, so I knocked and, when no one answered, let myself in. The front door opens into the living room. When I entered, I found one of my daughter’s roommates being intimate with a man on the living room couch.

I was obviously mortified, so I left the supplies at the door and left right away. I didn’t say anything to my daughter about what happened because I didn’t want to put her in an uncomfortable position but I did let her know that I had dropped off the supplies.

On Friday, I got an angry email from the roommate’s parents. I’m not sure exactly what they were told but their email lambasted me for invading their daughter’s privacy. They said that what I did was wrong because I’m their daughter’s landlord and I entered the condo without giving 24-hours notice.

They’re threatening to take legal action if I do it again. I am vaguely familiar with this requirement, but didn’t think it was applicable here. Was I the a**hole in this situation? I feel bad about what happened but I also don’t feel like I was out of line.”

One reader said she’s NTA and that she was entering the condo as a parent, not as a landlord.

And this individual said her daughter invited her over to drop stuff off and that she even knocked before she came in.