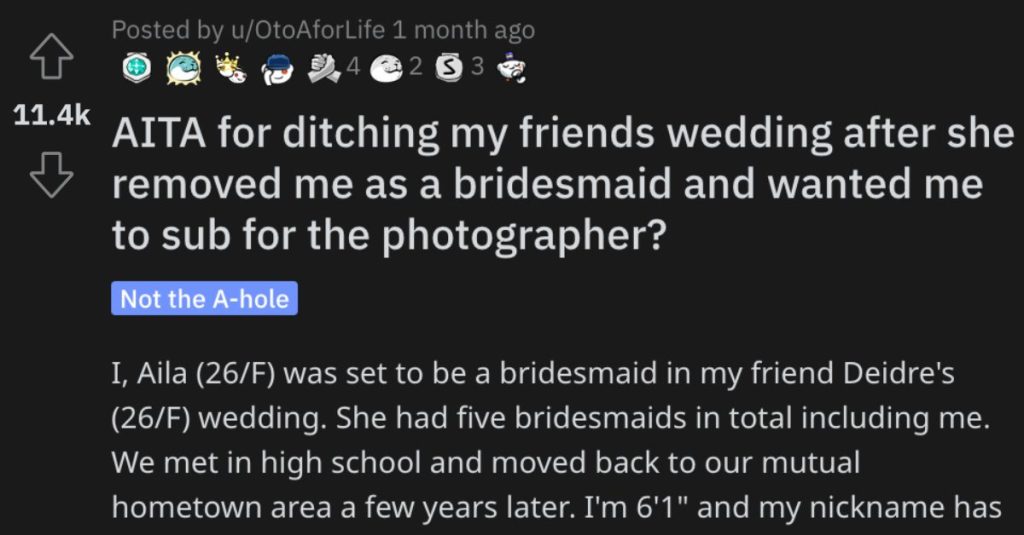 She Ditched Her Friend’s Wedding After She Was Replaced as a Bridesmaid. Is She Wrong?

I mean, what the heck are you supposed to do if someone removed you from their wedding party?

And they ASK YOU TO BE THE PHOTOGRAPHER?

So did this woman act like a**hole for ditching out on this wedding?

AITA for ditching my friend’s wedding after she removed me as a bridesmaid and wanted me to sub for the photographer?

“I, Aila (26/F) was set to be a bridesmaid in my friend Deidre’s (26/F) wedding. She had five bridesmaids in total including me.

We met in high school and moved back to our mutual hometown area a few years later. I’m 6’1” and my nickname has always been “Big Bird,” while the other girls and Diedre are about 5’4″ to 5’6″ or so. I have a Nikon DSLR and have always like to casually take pictures for my social media, which I did of all of us in the time leading up to the wedding.

The day of the wedding, the paid photographer Jenny was on-site at Diedre’s massive church but was sick. She said she’d eaten something that didn’t agree with her, that she could power through, and she’d done COVID tests so it wasn’t that, but ultimately she had to leave. Shortly after she left and before we were supposed to head toward the sanctuary,

Diedre asked me to walk around the perimeter of the church to make sure that the entrances were all labeled and that no one was lost, so I did that in my dress and tennis shoes and made it back in about 15 minutes. By the time I got back into the bridal suite it was nearly time to head into the foyer.

As I walked in everyone was quiet and staring at me. Diedre’s fiance’s sister Ashley, who hadn’t been sure if she could make the wedding, was there as well.

Diedre said that since Jenny was gone they didn’t have a wedding photographer. She wanted me to give my bridesmaid dress to Ashley and take photos with my Nikon, since no one wanted to just have pictures on their iphones.

Everybody swarmed me and started helping me out of my dress, pulling the rhinestone combs out of my hair, and Diedre took back the bridesmaid gift of the matching Tiffany bracelet we were wearing during the wedding to put on Ashley. Everyone said that this was a “much better plan” and started hyping up my photography skills.

They were also saying this would be great because the wedding party would look uniform now, and the moms were saying that it would be great to include all the “family girls” as bridesmaids. Diedre said that I would be able to eat after everyone else and that she wasn’t sure where Ashley had been sitting for dinner, but it wouldn’t matter because I wouldn’t need to sit down anyway.

This was all very rushed and I didn’t have time to think, but I was immediately pretty hurt by the demand that I be responsible for not only the wedding photography for free, but that everyone was implying that I’d make pictures look weird if I was in them, and that I’d be okay with not having a seat at all or the chance to eat.

I told Diedre that I wasn’t a professional photographer and that I didn’t know what I was doing, but she just kept saying “You’ll do great” and “I’m sure it’ll be good.” While everyone continued to get ready, I packed up all my stuff, said that I had to take it out to my car, then drove home.

One person said she’s NTA and that she was treated horribly. 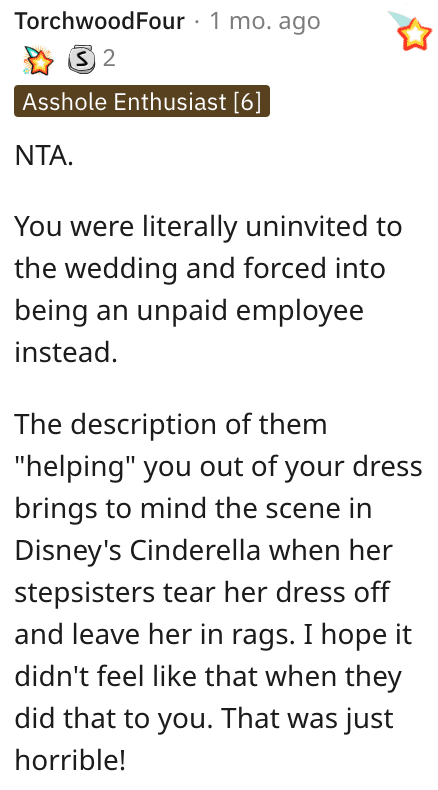 Another reader had an interesting perspective about this woman.

And this Reddit user said she’s NTA and that this whole bridal party sounds like a bunch of spoiled brats. 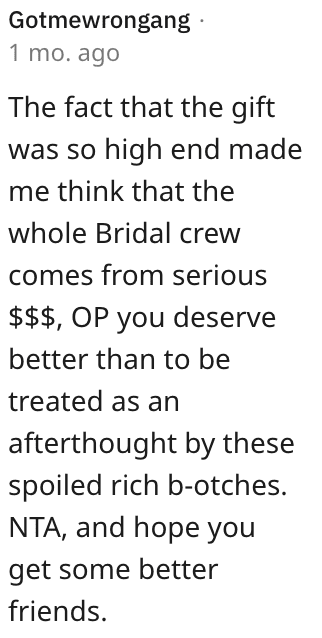