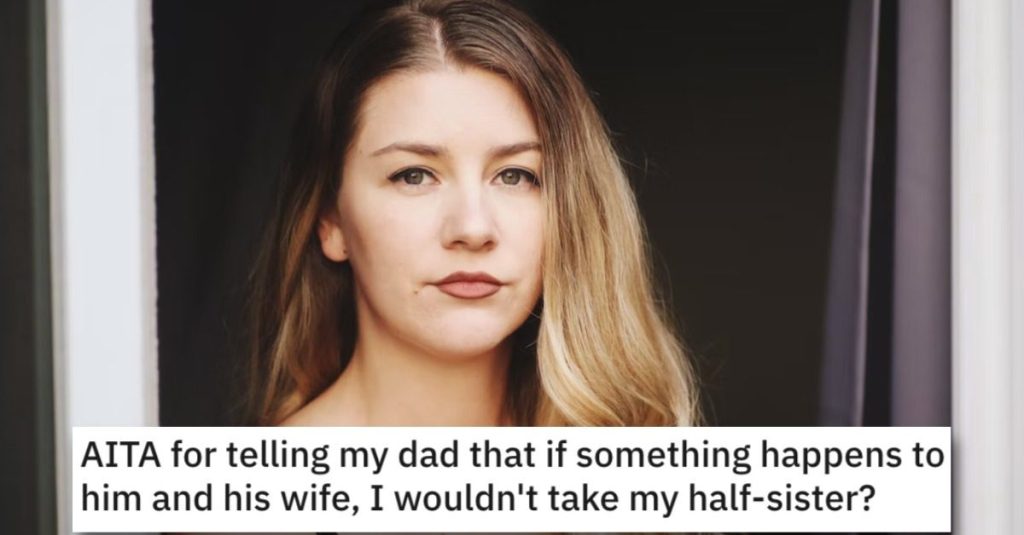 She Told Her Dad That She Wouldn’t Take In Her Half-Sister if Something Happened to Him. Is She a Jerk?

In a lot of families, it’s expected that a specific person will take in other family members if certain people pass away.

But what if someone isn’t up to the task or simply doesn’t want to do it?

Check out this story from Reddit’s “Am I the A**hole?” page and see if you think this woman was out of line for what she said to her father.

AITA for telling my dad that if something happens to him and his wife, I wouldn’t take my half-sister?

“My (26F) mom passed away a few years ago, during that time, we discovered that my dad had been cheating on her with a girl my age, his whole family disowned him and cut contact with him except for me.

I guess that at that time, I wasn’t ready to let go of both my parents at the same time, but over these last 5 years, I’ve been able to gradually let go to the point I only see him (them) twice or thrice a month, it’s like I have no family left. Don’t get me wrong, I also blame the girl for what happened, but the responsibility toward my mom and me was my dad’s, not her.

They eventually had my half-sister (4F) and for what I’ve heard and know, my dad and his wife are living paycheck by paycheck, on a budget and in a rental home since everyone in the family changed the will (both my grandparents and my mom, my dad didn’t get the house because it was an eventual inheritance from my grandparents, but since she d**d first, I’m the solely benefactor from both sides since my paternal grandparents skipped my dad).

Now, two days ago I went to visit him because it was his birthday and he said he and his wife wanted to talk to me, I was like ”eehh, ‘kay?” they said that they wanted me to be the legal guardian of my half-sister in case something happened to the, mainly because I’ll have the means for it.

My dad’s wife parents are able to care for her, but to an extent only, and that I’ll have the needed money to take care of a innocent child. I said no, not for the money, but because I just don’t wanna, I’m not close to my sister and currently I don’t see nor want myself taking care of a child, much less, the reminiscent of my mom’s last heartbreak. I said that I was willing to pass a monthly check (like a child support payment, but less than that since she’s not my kid) but that was the only thing I was willing to do.

My dad cried, saying that she was his baby and I was able to be a good sister like I was raised to, but I just laughed and said that he was no one to talk about goods and wrong and he and his wife should’ve thought of that before cheating.

His wife called me a monster and kicked me out of the house. I left. Later that night I sent my dad a text informing him of my decision of cut ties with him, completely, and that from now on we’ll be no contact unless it’s an emergency. He’s begging me to reconsider, but I don’t know if I’m right or wrong.”

One person said she’s NTA and that she needs to run and not look back.

Another Reddit user agreed and said she did the right thing by not getting guilt-tripped into this.

And this individual said she’s NTA and she was right to cut them off. 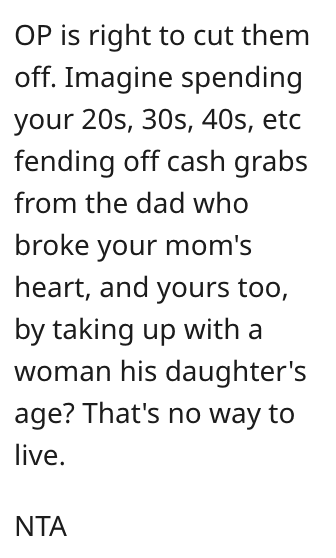