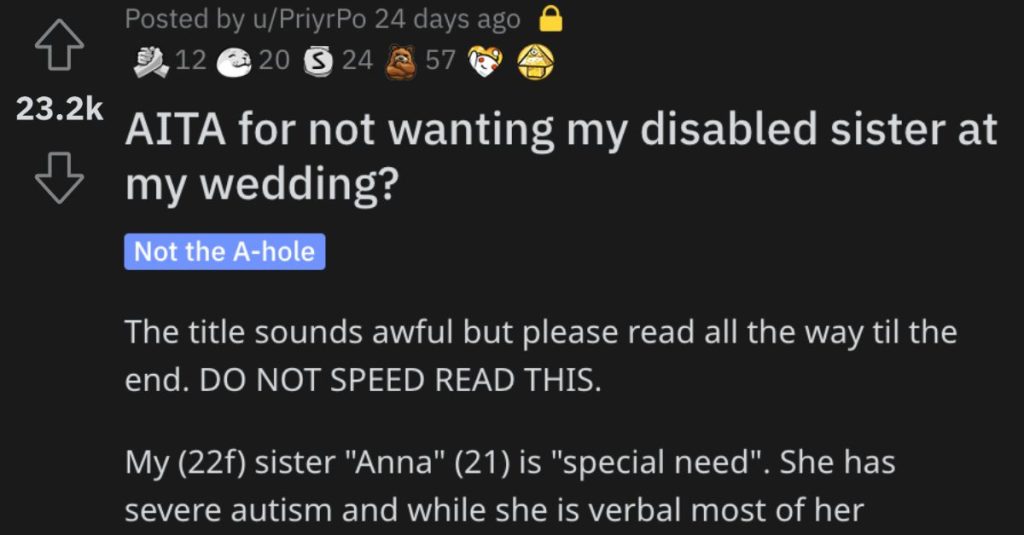 She Doesn’t Want Her Disabled Sister at Her Wedding. Is She Wrong?

Here’s another story from Reddit’s “Am I the A**hole?” page that looks bad from the get-go.

Let’s take a look and you be the judge.

AITA for not wanting my disabled sister at my wedding?

“The title sounds awful but please read all the way til the end. DO NOT SPEED READ THIS.

My (22f) sister “Anna” (21) is “special need”. She has severe autism and while she is verbal most of her communication is “physical” like sign language due to her social discomfort. She does speak around family though and has pretty bad cognitive skills. She can’t comprehend boundaries and lives with our parents so they can best watch her.

I am getting married in 3 months. We planned a simple wedding and reception at my fiance “Michael’s” parents barn and farm. Since it’s all gonna be DIY and we aren’t planning anything too expensive, we can do things pretty quickly since flowers, food and decor will be provided by his family.

I sent out invites last week and I asked that Anna not come. I told my parents I understood that would mean they may not show up but it was just a heads up. Why no Anna? She has an issue with touching Michael and trying to kiss him. At times when we were at my parents house Anna would try and grab Michael’s hands, try to lean in to kiss him or would have a really bad shutdowns if she wasn’t allowed to be directly next to him.

We’ve tried speaking to her but there’s only so much we can do when she doesn’t really understand. I told my parents I just want one day for Michael to be my partner and not Anna’s comfort person. They called me selfish and asked how I expected them to agree to something like this.

They told me Anna is disabled and may never experience a wedding of her own and while I have Michael for probably the rest of our lives she’ll have no one and that Michael and I can be a little more understanding to the reality of her life.

I feel like a total a** and what they’re saying has really gotten to me and I’m starting to question my decision. AITA?

Update: My parents called me letting me know they won’t be coming and that it’s best I don’t bring Michael around anymore since I’ve “chosen some man over my sister”. They told me that Anna wanting to kiss Michael and hug him is normal for a women her age and that she doesn’t understand what her feelings mean.

I suggested they try to redirect her during the wedding but they said Michael is gonna be family to her and he needs to “get over it”. I suggested they watch the wedding via web and they said that’s not fair and that they deserve to see things in person. I asked if I could pay for someone with proper credentials to watch her that day while they attention and they asked what I would do when they d**d and if I’d pawn her off every time.

I dropped the unfortunate truth bomb that I don’t want to put any more of my life aside for Anna anymore. I did it up until I turned 18. And that Anna is not my life’s responsibility and I won’t be her keeper. I assured them I’d pay for her care but if she’s okay doing this to Michael then I worry for if I ever do choose to have children and what she’d do to them.

They said I was sick for suggesting she’d do anything to my future children and hung up on me. They sent a lengthy text telling me not to contact them until I could “do the right thing”. So thats where we are right now.”

Let’s see what folks on Reddit said about this.

This reader said that this woman did not act like an a**hole and that her husband needed to be alone on this special day.

Another person agreed and said that they should have another celebration at a later date to accommodate her sister. 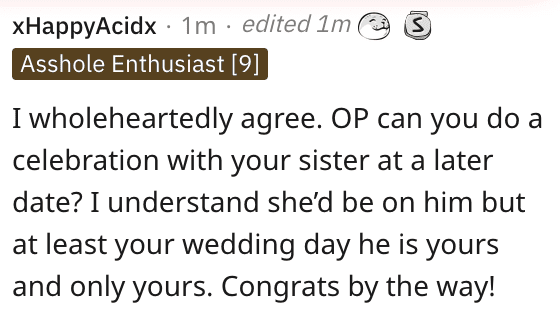 And this individual said they understand this woman’s dilemma but they also agree that she is not an a**hole. 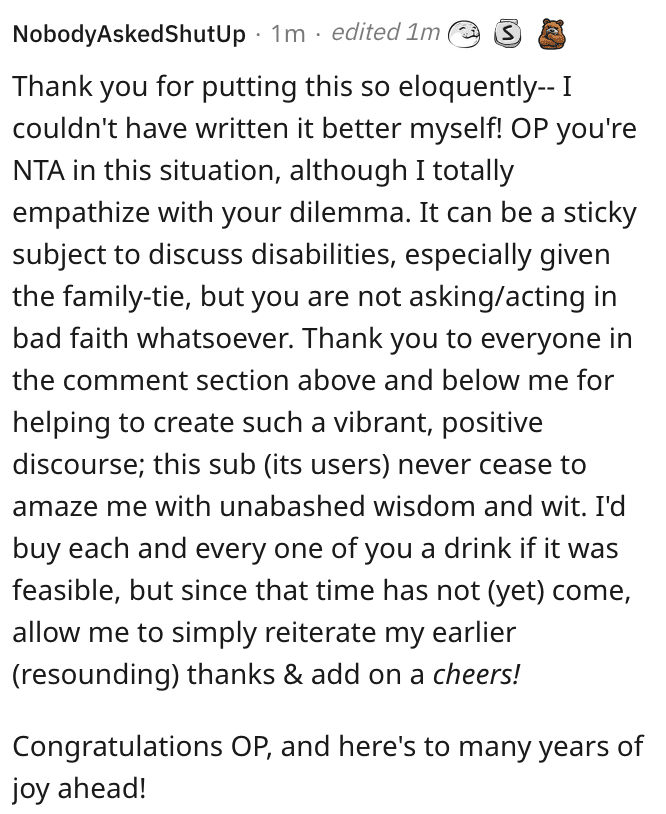 And this reader said they could do a mock wedding at home for her sister to enjoy so she can be comfortable. Amen!