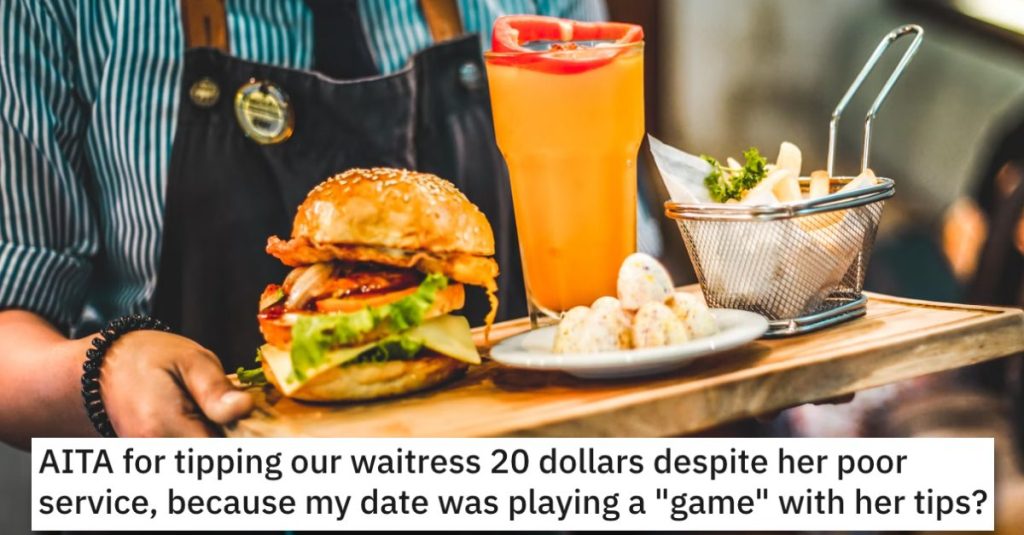 She Gave a Waitress a 20% Tip Because Her Date Was Playing Games With Her at Dinner. Was She Wrong?

I don’t think I’m alone in saying that people who play that stupid game with the tips of people who are serving them at restaurants are total idiots.

So you know where I stand on this story…

But read the whole story for yourself and make up your own mind.

AITA for tipping our waitress 20 dollars despite her poor service, because my date was playing a “game” with her tips?

“I met a guy on a dating app, we hit it off and we arranged for our first date. Things were going well, we had sat down and had started some small chat. Our waitress comes over asking us what we want to order.

I say what I want and gesture to him so he can order. He orders and then pulls what I think is about 15 dollars on the table. He says “This is your tip. Everytime you mess up, I take some away”.

The waitress looked nervous immediately. I’m sitting there a bit shocked, but mostly embarrassed because I wasn’t expecting this. She must have been new as well, because she did spill some drinks on our table that night, gave us the wrong food, and overall just seemed lost. He took away 13 dollars.

I asked him why he thought doing tips this way was a good idea. He said it was the best way to ensure “good service”. When I disagreed he said “Cant always be nice to these people, it’s not a respectable job”.

I decided then that I wanted nothing to do with him, and called the waitress over to get the bill. I slapped a 20 dollar bill in her hand and got up to pay for my own meal.

Later that night he had demanded to know why I had given her the tip despite her poor service and I told him it’s because he decided to treat her livelihood like it was a game. He said because of me she’ll never improve her service and that I’m just a people pleaser.

I blocked him, but I’ve wondered ever since if that was really the right thing to do.

This reader said she’s NTA and that this tactic probably made the server do a worse job.

Another Reddit user said she’s NTA and made a good point about this situation.

Another individual also said she’s NTA and said what they’d do if they were the server in this situation. 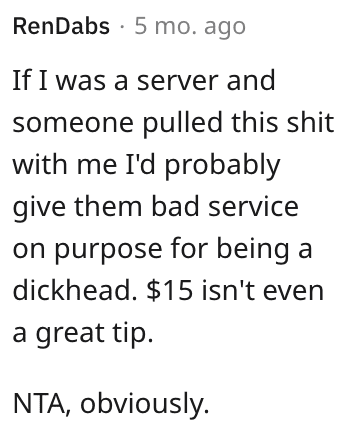