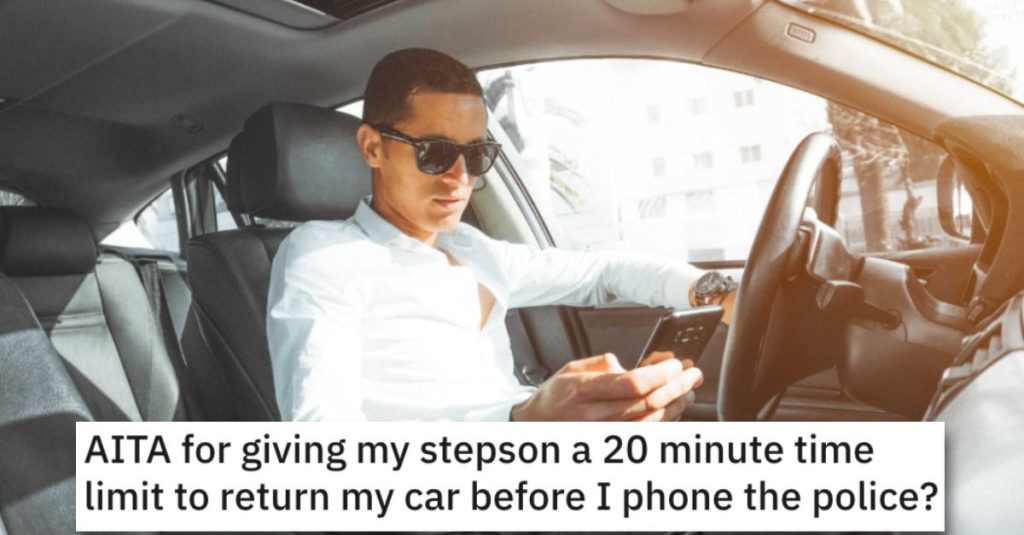 She Gave Her Stepson 20 Minutes to Get Home With Her Car or She’d Call the Cops. Was She Wrong?

You got 20 minutes to get home or I’m calling the cops!

But let’s see what exactly what down in this story from the “Am I the A**hole?” page on Reddit before we start losing our minds, okay?

Get all the details below!

AITA for giving my stepson a 20 minute time limit to return my car before I phone the police?

“I am a 34F doctor, and part of my job entails being on-call for one to three nights a week, twice a month.

My fiance Dale 30M has been saving with my stepson’s mom to buy him a car for Christmas. My stepson Rex 16M has a license already but always has to borrow his mom’s station wagon or his dad’s beat-up pickup truck. His mom’s car is “lame and embarrassing”, and his dad’s can only hold one passenger. Not practical for a teen.

On to the main conflict…

Rex texted me yesterday around 12 if he could borrow my car after school. His friends wanted to go to the mall but the bus route is too long, could they borrow my car?

I texted back a sorry but no, I am on call again. Can you ask your mom?

He says no. I told him sorry but my answer is still no. I’m sure you will find a solution. Ask your friends and you can all figure it out.

If you see where this is going, you are less shocked than I am.

I was up in my home office (the room where I keep my Switch, sewing machine, and laptop, so not an official office) when I heard Rex and his friends downstairs after school. I was going to see if they needed anything but they left after a few minutes.

An hour later, I went to the kitchen, cleaning up the empty bottles and wrappers from their snacks, I saw the spot where I left my keys empty, I began to panic.

First I bolted to the door. My car was gone.

Immediately dialed my stepson. He picks up and it’s obvious he’s in a mall store that plays loud music.

I told him to get his a** home NOW, and he laughed and said that I am not his mom. He’ll be home whenever he pleases.

I’m not proud but I told him that he has 20 minutes to get home or I call the police and report it stolen. Rex panics and said he couldn’t find all his friends and drive home in 20 minutes. Told him tough s**t.

10 minutes later I get a text that he is in the mall parking lot and will be home soon.

I phoned Rex’s mom and informed her of his stunt. She was madder than me when I told her that I was on-call. She apologized and promised to talk with Rex and Dale ASAP.

Rex came in, threw me my keys, locked himself in his room.

Dale finally came home around 8 and said he had been on the phone with his ex. He DEMANDED to know why I punished his son.

I put my foot down and explained I am on-call, that means I need my car. Rex stole my car. Dale disagrees. His ex agrees with me and decided she will not be buying Rex a car anytime soon due to his entitlement.

Dale thinks that I am making a big deal out of nothing. I didn’t end up going into work so why did I have to threaten Rex?

I have only gone in twice this year while on-call. Just because nothing happens doesn’t mean that I am always clear.

Rex is now grounded. Fiance barely speaks to me. Asks me when I’m going in today (I’m not) and if I will apologize.

I am not budging and am still p**sed he doesn’t get it.

One reader said she’s NTA and that this young man owes her an apology. 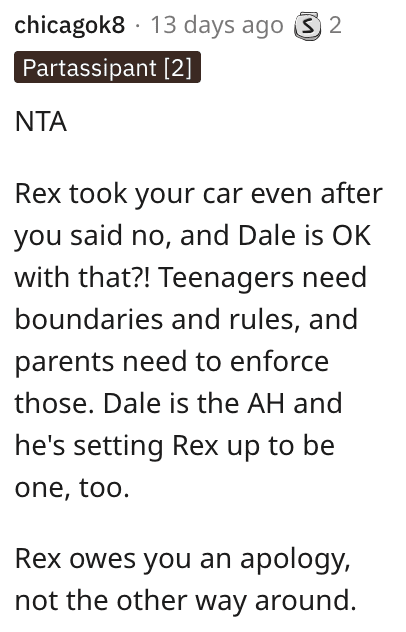 Another individual agreed and said that this Dale character is way off base here. 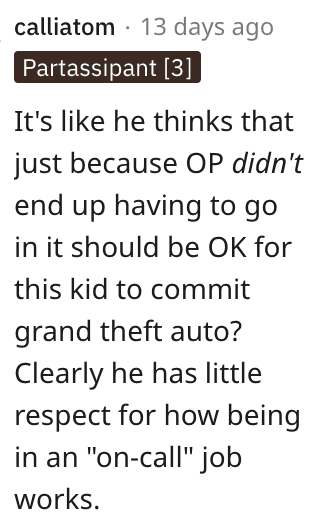