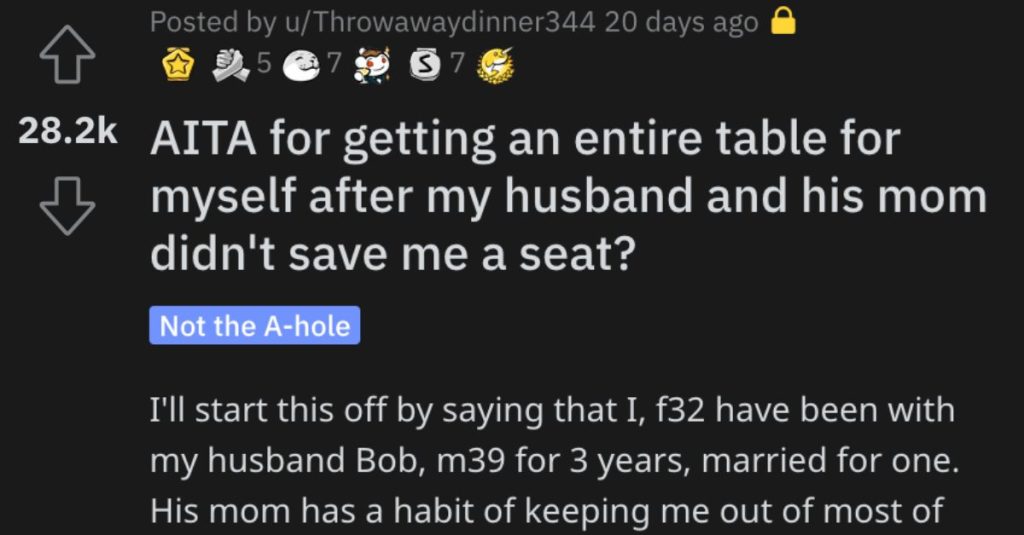 She Got a Table to Herself After Her Husband Didn’t Save Her a Seat. Was She Wrong?

What ever happened to manners and common courtesy?

All I can say is that seems that people keep getting ruder and ruder…and this story really drives that point home.

Check it out and see if you think this woman was wrong for how she reacted after no one saved her a seat when she went out to dinner.

AITA for getting an entire table for myself after my husband and his mom didn’t save me a seat?

“I’ll start this off by saying that I, f32 have been with my husband Bob, m39 for 3 years, married for one. His mom has a habit of keeping me out of most of their functions with the excuse of “you work too much”. Not true because sometimes I do make myself available but yet find myself excluded.

Last week. His mom invited us for a celebratory dinner at the restaurant after she completed her recovery. I had to with that day but I ket her and everyone know that I’d be there at 8pm. Bob obviously knew I was coming.

Thing is, when I arrived to the restaurant I saw that the table was full. All chairs had been taken and I just stood there with complete puzzlement while Bob and his mom just stared at me. His mom then told me there was no place left for me and that I could either have Bob get up and take his seat or …. go home.

I was so upset but instead of going home I just went and took an entire table for me. Bob and his mom watched with their eyes popping out of their heads like they saw something so shocking… NGL I did get weird looks from the guests but so did Bob and his mom. It was awkward in all honesty.

I had my dinner, dessert, then went home. I saw Bob and his mom staring grudgingly while I was making my way out. He got home an hour later and yelled saying I embarrassed his mom infront of her guests.

I yelled asking WTF was I supposed to do after I got denied a seat and he told me that it wasn’t his nor his mom’s fault guests arrived “before” me and took all the available chairs. I told him he could’ve saved me a chair!!!!!. he said that I could’ve just left instead, and reminded me that I was a “guest” and that I shouldn’t expect this level of entitlement to be “accepted”.

He then went on about how I ruined the entire dinner for him and his mom with what I did and has been pouting about it for days now.

I don’t get it, I really don’t. was my expectation really that entitled? I mean as his wife he should’ve saved me a seat. But clearly I’m missing something here.” 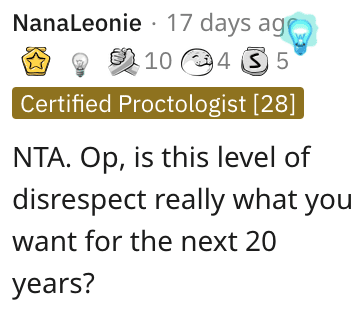 And this individual said she was intentionally being excluded. 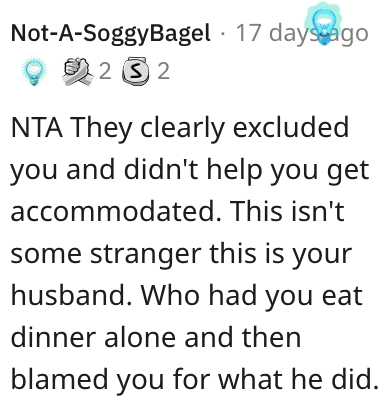 Another Reddit user said that EVERYONE at this dinner party BLOWS. 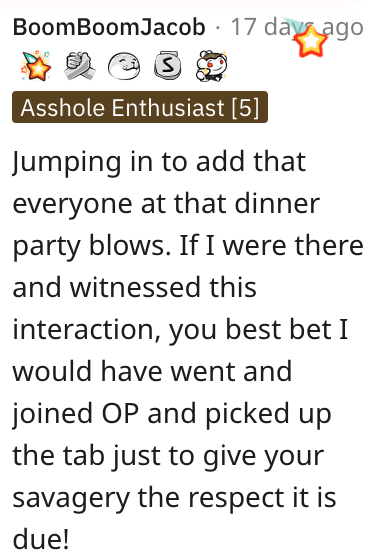