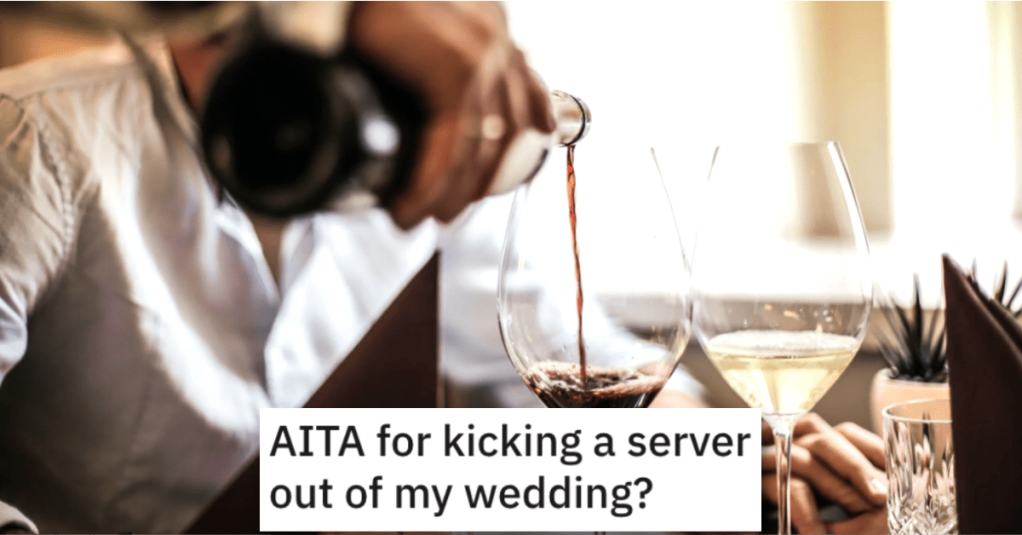 She Kicked a Server Out of Her Wedding. Did She Go Too Far?

Woof! This really doesn’t sound good, now does it?

To kick someone who’s working out of your own wedding?

But was this woman out of line for giving a server the boot on her special day?

AITA for kicking a server out of my wedding?

“I(25f) and my Husband (30M) and I got married last Friday. We planned our dream wedding down to our dream catering company.

The wedding was beautiful after the pictures we headed to our cocktail hour, and that’s when I saw her. My guest were all told to wear dark colors so my husband and I stood out, I also asked my guests to wear minimal makeup. I had assumed that applied to the staff too.

The server(19ishf) had on clearly too much eyeliner. she also had diamond studs in her ears a flashy ring, and one of those ugly nose studs. The staff’s uniform was a black long-sleeved shirt but on her, it was too low cut and her pants were far too tight.

Not even an hour later the server was back out serving food for dinner. I called the boss over again and asked if the server could work in the back or go home. Her boss said they were short-staffed tonight so she would see what can be done.

After a couple of hours of not seeing her, I saw the server again behind the bar. I called the boss out one last time and told her if the server didn’t leave I would be calling the cops. the boss finally relented and told the girl to go home.

My husband and mother-in-law said I was acting crazy and that I probably got a poor college kid fired over nothing. My mother and MOH said it’s my wedding so I can do as I please. It’s my wedding and I don’t want someone over-shining me and the server should know she’s at work and not dress up so much. I do feel kind of bad because she was pretty young.

Check out what people on Reddit had to say.

This reader made it sound like they think this woman’s actions were pretty out of line.

Another individual had an idea about what was really going on here.

And this individiual said this whole thing was a waste of energy.

We can’t wait to hear from you.