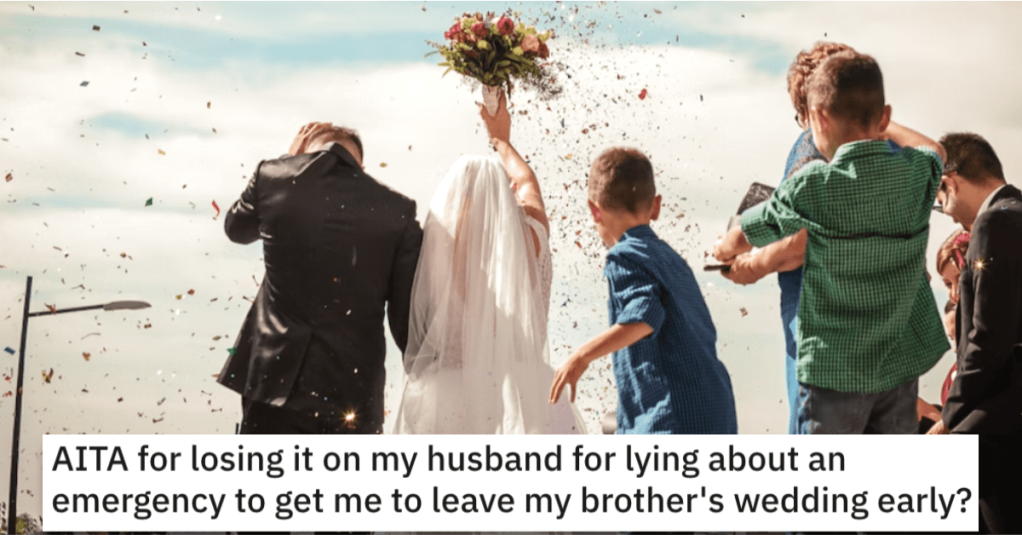 She Lashed Out at Her Husband After He Lied to Her and She Left Her Brother’s Wedding. Was She Wrong?

I don’t want to give anything away, but this guy sounds like a handful…

A handful that a lot of people wouldn’t want to deal with.

Read the post below and let us know in the comments if you think this woman is out of line for how she treated her husband.

AITA for losing it on my husband for lying about an emergency to get me to leave my brother’s wedding early?

“My husband has been sick for few days. He got sicm around the time of my brother’s wedding. I took care of him 24hrs for days.

He’s on meds and can move and go to the bathroom and eat on his own. I told him I was going to my brother’s wedding and he threw a fit saying I couldn’t leave him alond while he’s sick. I told him he was not that sick, it’s just some stomache that he’s getting treatment for and suggested he call his sister to come stay with him.

He said no and told me to miss it. I got upset and bluntly said no and that he could survive for few hours while I attend the wedding. He sulked and as I was leaving, he said he hoped I won’t ever come back. It hurt my feelings but I know he was just mad and didn’t mean it.

At the wedding, I got a text from him saying he lost balance and fell off the stairs and hurt his back. He said he was in a lot of pain he threw up and couldn’t move, and insisted I get home asap. I freaked out and started calling his phone but he didn’t answer. I thought “he must’ve passed out” and I freaked out even more. I got in my car and drove back to our house immediately.

When I got home, I rushed towards the stairs while calling out his name but he wasn’t there. I started to really freak out. I rushed into the bedroom and found him in bed drinking juice and soon as he saw me he put the phone down. I instantly knew he lied so I lost it on him and started yelling saying he freaked me out and caused me to miss my brother’s wedding for nothing…absolutely nothing.

He said that he already told me I couldn’t leave him alone in the house and that this “very scenario” could’ve happened if I stayed there any longer. I yelled at him calling him horrible which made him cry. He started crying and throwing his juice all over the place.

I had to step out and call his sister thinking she’d come help but she came and started cussing me out saying I had a lot of nerve expecting her to back me up after I so carelessly left her brother alone af the house in that state just to attend a party. We got into an argument and I went to stag with my family.

My brother understood whrn I explained the situation to him. My husband and I haven’t seen each other since then but his sister kept saying I had no right to scream at her brother and cause him a panic attack and said that he at least was clear with me from the start but I chose to be dismissive.

Was what I did dismissive?”

One person said she’s NTA and that this guy is manipulative. 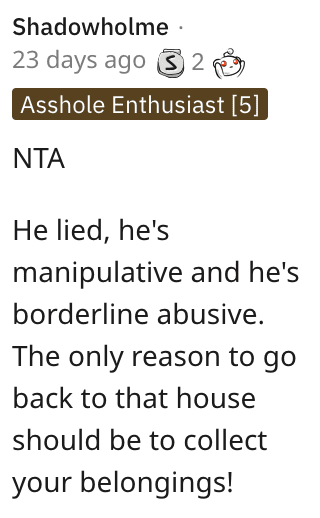 Another Reddit user said this guy is straight-up a**sive. 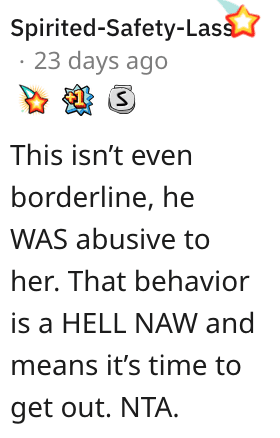 And this individual said this woman needs to get out of this relationship. 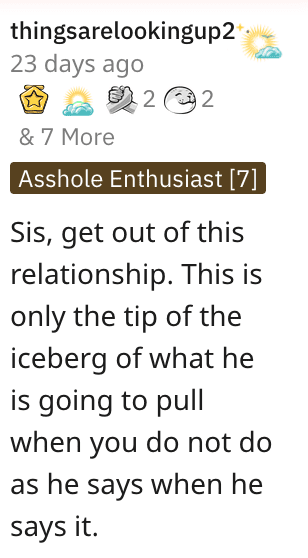