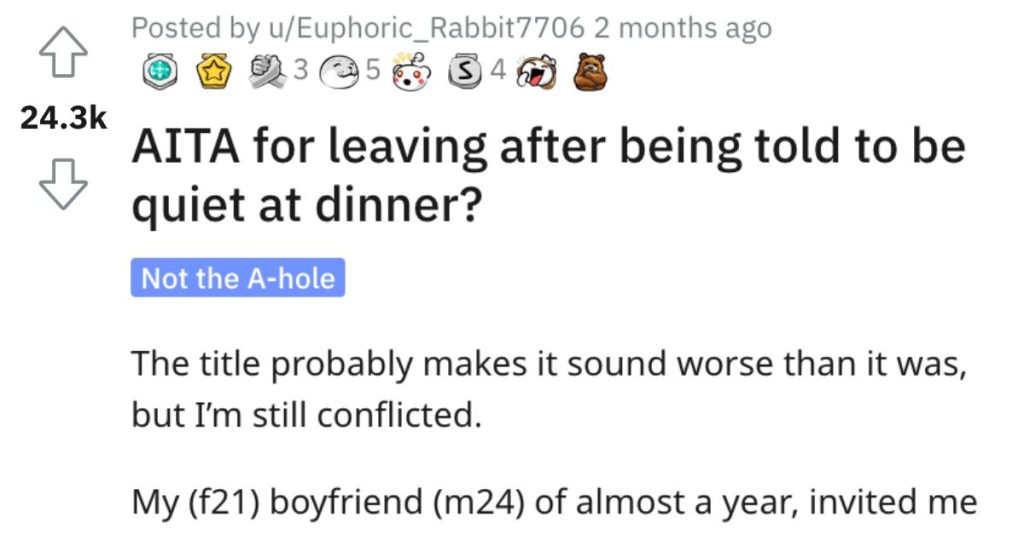 She Left a Dinner After She Was Told to Be Quiet. Did She Go Too Far?

Wow, this sure sounds rude!

Telling someone to be quiet at a dinner table…not cool!

At least in my book.

But we want to know what you think.

So check out this story from Reddit’s “Am I the A**hole?” page and share your thoughts with us in the comments.

AITA for leaving after being told to be quiet at dinner?

“My (f21) boyfriend (m24) of almost a year, invited me to dinner with his family. (Mom, dad and his 16yr old brother.) Never met them prior to that. The only thing I knew about them is that they’re conservative and christians but lovely people.

And they were. I got along really well with them, before dinner. They were lovely and talkative. When it was time for dinner, my bfs dad wanted to pray. After praying he said, something along the lines of “let us dig and let the food keep us quiet.”

This is a pretty popular saying in our country, mostly told to young children in school. My understanding of this has always been that you shouldn’t speak with food in your mouth or be extremely loud at the table. I wouldn’t say its a cultural thing, though.

I dug in, took a bite. It was fish soup. Absolutely delicious. And y’know, like a good guest I wanted to compliment the cook. “This is delicious – is it saffron? A perfect autumn soup!” My bfs brother looked surprised. My bfs father hushed me. Big time. A really aggressive SHHH with a finger over his lips.

And then he said, again, “Let the food keep us quiet.” I apologize because I thought I had accidentally spoken with food in my mouth or something. But a few minutes passed and nobody said a word. Super awkward and weird, especially since they had been so talkative before. My bf was also unusually quiet.

After a few minutes I was too weirded out and asked about their day, and how nice it was that they invited me there. And his mother did the hush thing? So awkward. I think this is when it clicked, no speaking at all at the table.

Let the food keep us quiet. Really quiet. But this was a super awkward situation, and I couldn’t deal with that. Imagine sitting at a table with 5 people, everybody eating soup looking dead serious. So I laughed, it just slipped out.

Ended up being told off by bf’s parents that I was being disrespectful etc. and if I didn’t respect how their household worked I could eat alone in the kitchen. (We were eating in like a separate dining room.) Sooo I thanked them for the food and left to the hotel me and bf stayed at.

My boyfriend later told me that was an a**hole move, that I should’ve just kept quiet or eat alone in the kitchen. I understand their family traditions and rules, but it was so weird. I just couldn’t take it anymore. Was I being an a**hole though?”

One person said she’s NTA and that her BF should have warned her about this. 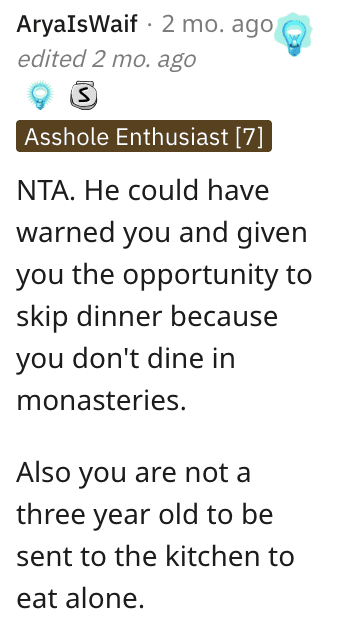 Another individual said this whole thing is bizarre.

And this Reddit user said she’s NTA and these people are just RUDE. 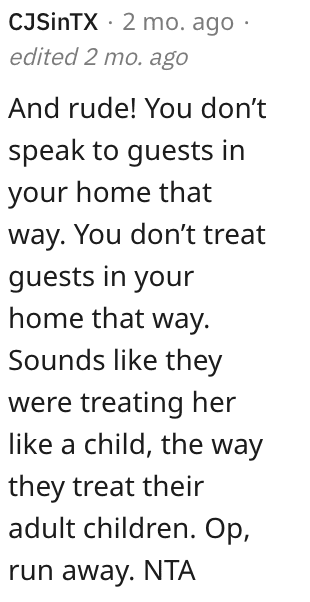