She Put a Lock on the Bathroom Door Because Her Brother-In-Law Kept Barging In. Is She a Jerk?

Why can’t people just knock on doors before they go barging in?

Take a look at this story from Reddit’s “Am I the A**hole?” page and see if you think this woman was out of line.

AITA for installing a lock on the bathroom door after my BIL kept barging in?

“My f25 husband’s m30, brother (BIL) m33 moved in with us after his divorce few weeks ago. The problem I have is that he started barging in to the bathroom whenever I’m using it.

He never knocks or anything. Another thing is that he only does this when it’s me in the bathroom not his brother. I told my husband about what I’d noticed but he laughed it off and called me paranoid. It was embarrassing because his brother would see me exposed and it made me uncomfortable. My husband said he spoke to him and he apologized but did it again.

When my husband and I got married, we promised to not have locks or lock each other out of any room. So the bathroom didn’t have a lock. I was really considering getting a lock and I let my husband know that if his brother walks in on me in the bathroom one more time then a lock will instantly be installed. He didn’t say anything.

Well, Yesterday, BIL walked in on me showering. He knew I would be in the shower but barged in anyone claming he needed to pee. I had enough I went out and got a lock and installed it.

My husband got home, saw it and blew up on me saying I voilated an agreement that I was part of” and went against his wishes being uncomfortable with locks in the house. He demanded I remove it and promised and guarenteed that his brother won’t walk in on me again but I refused.

He’s been p**sed about it since then and is giving the silence treatement.” 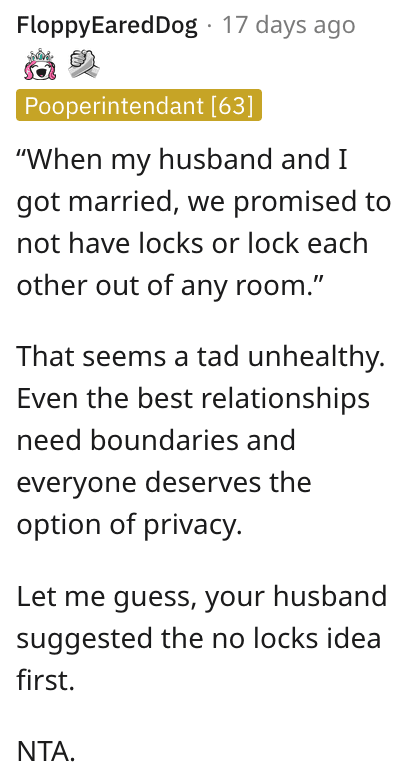