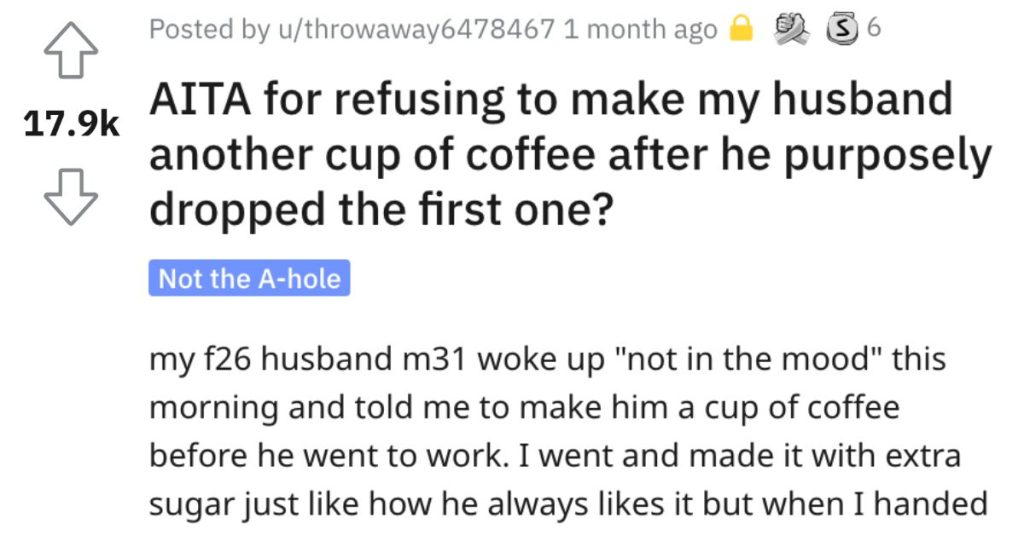 She Refused to Make Her Husband a Cup of Coffee After He Dropped One on Purpose. Is She a Jerk?

Just the title of this article alone is giving me some anxiety…and, admittedly without knowing the details yet, it makes me a little bit anxious.

But let’s see what actually happened before we make up our minds, okay?

Read on to see what happened and see if you think this woman acted like an a**hole.

AITA for refusing to make my husband another cup of coffee after he purposely dropped the first one?

“My f26 husband m31 woke up “not in the mood” this morning and told me to make him a cup of coffee before he went to work.

I went and made it with extra sugar just like how he always likes it but when I handed it to him and he tasted it, he made a face and said it was too sweet. I told him this is how he usually has it but he said he wasn’t in a good mood today and told me to make another one.

Mind you I was already 20mins late for work, I told him no and he already had one and should just drink it. next thing I knew he dropped tge cup on the floor “purposely” and said that “he no longer has it” and I should go ahead and make another one. I refused and then we had an argument and I just walked out.

He texted me a bunch later saying I disrespected him and forced him to not have his daily coffee by acting stubborn and having an attitude. then reminded me of how much work he’s picked and how much time and rest he’d sacrificed in order to help me while I was recovering from the birth of our son and that was just the first week then I had to get up.

He said I owe him, and that I should’ve returned at keast one of his many favors instead of deciding to ruin his day. I came home and he’s here refusing to even look at me.

AITA? should I have just taken 5 minutes to make him another one?”

This reader laid on the sarcasm pretty thickly. 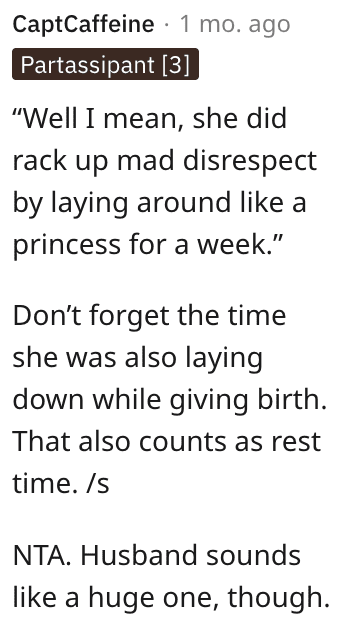 And this individual said you can still be sleep deprived with a kid this age but the husband is still an a**hole. 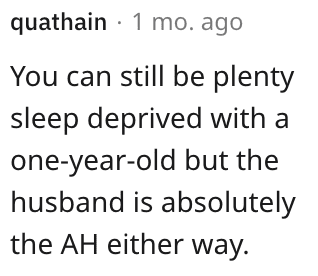