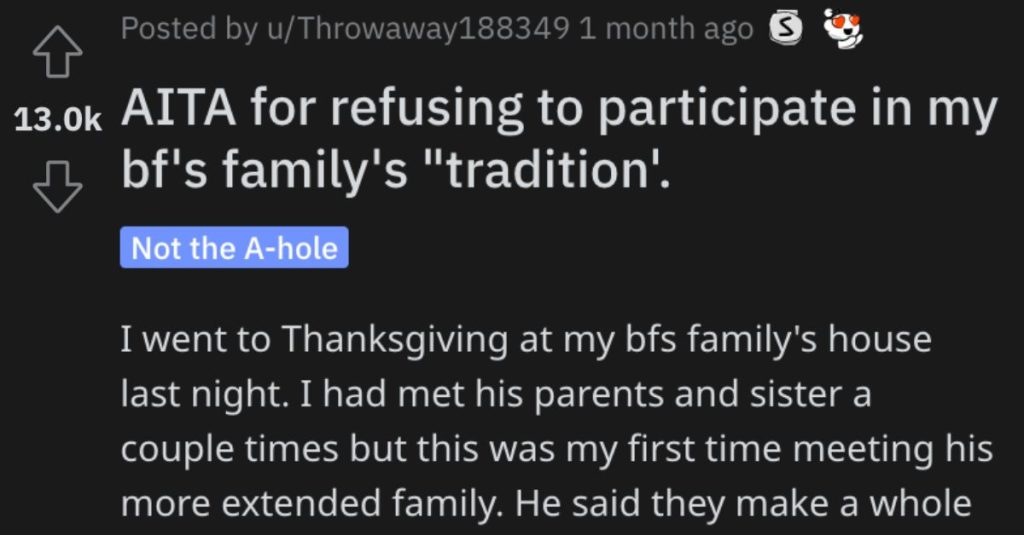 She Refused to Participate in Her Boyfriend’s Family’s Thanksgiving Tradition. Was She Wrong?

Some traditions are just meant to be broken, I guess…

But we want to know what YOU think.

Check out this woman’s story and see if you think she acted like an a**hole for not participating in her boyfriend’s family’s Thanksgiving tradition.

AITA for refusing to participate in my BF’s family’s “tradition’.

“I went to Thanksgiving at my bfs family’s house last night. I had met his parents and sister a couple times but this was my first time meeting his more extended family. He said they make a whole day of it, so we would be heading over around 10am.

When we arrived there were several men sitting in the living room watching football. My bf introduced me to his brother, BIL, uncles and some cousins. His dad was was also there.

There is a cooler in the middle of the room and my bf grabs a beer and sits down to watch the game.

His mom and sister come in to say “hi” and his mom says “perfect timing! We are just getting going in the kitchen! Come on let’s get you a drink!”

I go into the kitchen and there are several women in there. They have Christmas movies on the TV and most of them are doing some kind of food prep.

I grab my drink and go back and sit with my bf.

I tried to strike up some conversation, but the guys were super into the game.

After a while I take my bf to the side and tell him I feel awkward, since I’m not into football, and no one is really talking to me.

I told him I found that extremely misogynistic, and I was not interested in “going to the kitchen” while the men sat around drinking and watching TV.

I ended up just sitting around awkwardly watching them all talk sports until basically dinner was served, at which point they got up, got a plate and went back to watching tv.

I told my bf after that I was upset and he said I was over reacting. I told him it was awkward, as I didn’t like sports but I didn’t want to be banished to the kitchen with “the women”. I told him I didn’t really feel like I got to know next to nothing about his family, except that they have this messed up “tradition”.

Now it’s time to see what Reddit users had to say.

One person said she’s NTA and she just got a glimpse of what her future will be like. 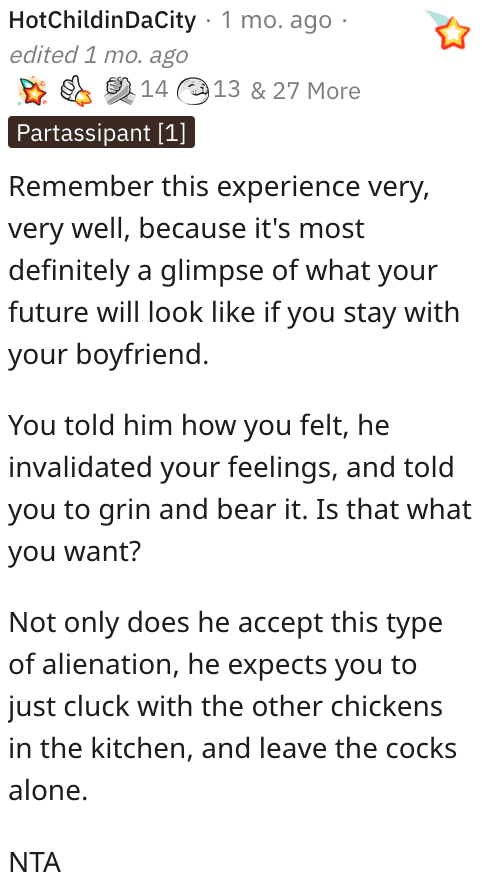 Another individual asked what her boyfriend was supposed to do about this but added he should have told her about this beforehand.

And this Reddit user said they’d be turned off by this if it happened to them.