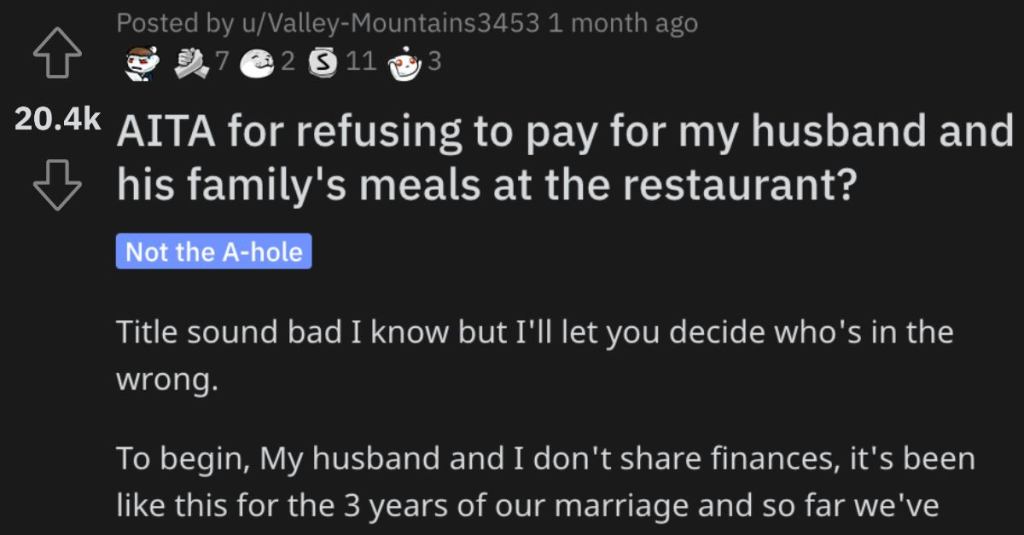 She Refused to Pay For Her Husband’s Family’s Meals at a Restaurant. Is She a Jerk?

Are you gonna pick up the check tonight?

Check out this story and see if you think this woman acted like an a**hole or if she was justified in her actions.

AITA for refusing to pay for my husband and his family’s meals at the restaurant?

“Title sounds bad, I know, but I’ll let you decide who’s in the wrong.

To begin, My husband and I don’t share finances, it’s been like this for the 3 years of our marriage and so far we’ve been doing well, though he’d sometimes try to get me to pay for him but I do it only when I want to do a nice thing for him, say invite him to a restaurant.

This past week, he got a bonus at work, he was overjoyed he informed his entire family and planned for them to go out and celebrate with us. He picked the restaurant, meals, drinks etc, I naturally thought he was going to pay for all that since, it’s his happy celebration. But it turns out I was wrong because when it was time to pay the bill, he told me to “take care of it” I said why? It’s his celebration not mine but he insisted I pay and he’ll explain later.

I refused and demanded an explanation, he said that while yes he is the one who got bonus, but he assumed I’d want to celebrate that and offer to cover the bill. when I talked about how ridiculous it was of him to assume I’d pay for not just his, but his family’s meals he said that I should be happy for him instead of being visibly bitter. He then said he’s yet to receive his bonus and begged that I take care of the bill now and he “might” consider paying me back later.

I refused and only paid for what I consumed. Him and his family started talking about how inappropriate I was acting, I took my purse and went home afterwards cause there was so much commotion when they started arguing who’s going to cover the bill.

His mom spam called me for hours, and he went off on me at home saying I spoiled his celebration and joy because I’m feeling bitter, especially considering I had enough money to cover the bill right there and then. I said this wasn’t my obligation and he was the one who came up with the celebration idea.

He argued that if the roles were reversed and I got a bonus, he’d celebrate me and my achievements and pay for the “d**n” meals after taking me and my family out. I casually said “well, that’s just you not me”.

He got even more pissed and said that he had had it with my juvenile antics and that he won’t ever forget the scene I made at the restaurant in front of his family.

Been upset with me for days now.”

This reader brought up a good point about what happened here. 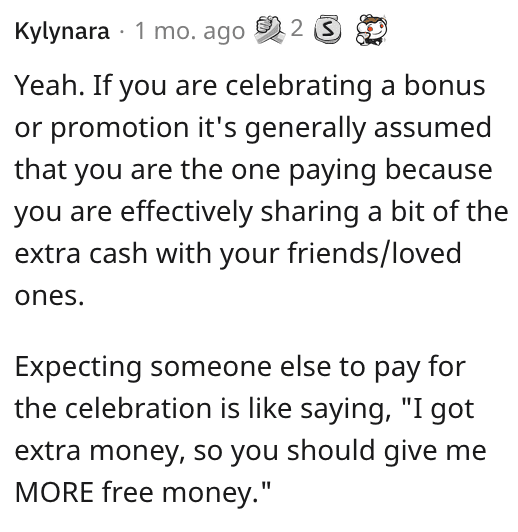 And this Reddit user said this woman’s husband is the a**hole for not discussing the dinner plans with her. 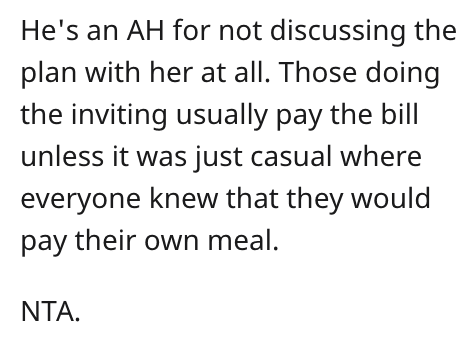 Another individual brought up a good point: why wasn’t this discussed ahead of time? 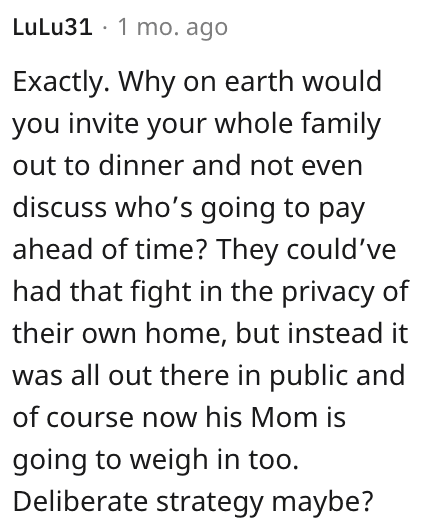