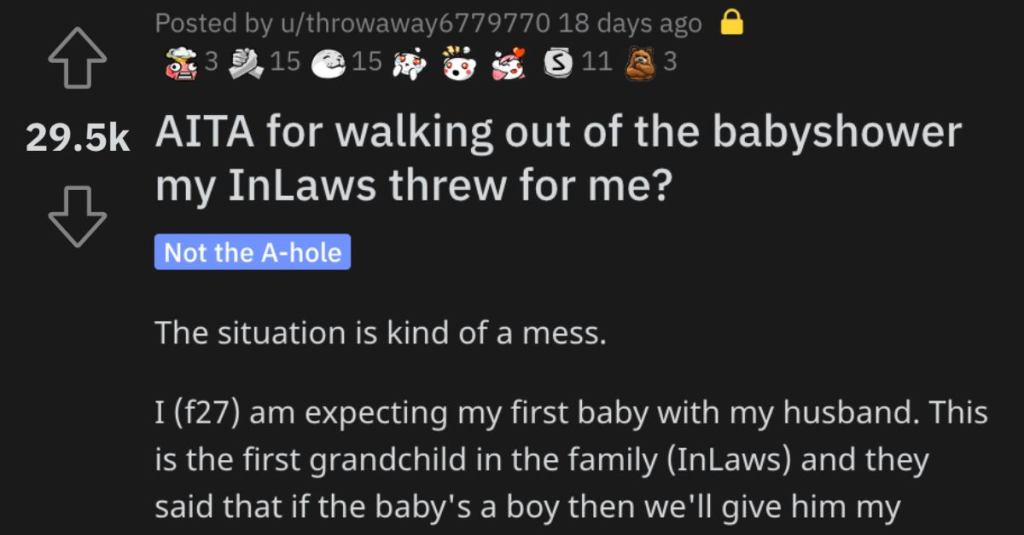 When you gotta go, you gotta go…and I guess that doesn’t only apply to having to use the restroom when nature calls.

Because in this story from Reddit’s “Am I the A**hole?” page, a mom-to-be wants to know if she overreacted by walking out of her baby shower.

AITA for walking out of the baby shower my in-laws threw for me?

“I (f27) am expecting my first baby with my husband. This is the first grandchild in the family (InLaws) and they said that if the baby’s a boy then we’ll give him my Father-In-Law’s name (he’s dead due to cancer). I had no problem with that.

This happened before we found out the gender of the baby – my husband and his family had me “do things” like attend prayers and do other rituals before the reveal at the drs. I didn’t like that but went with it to keep the peace.

Dr appointment came, and it turned out to be a girl. My husband cried in the car then turned his phone off to hide from his family then finally told them. His mom and the others made their frustration & disappointment clear which bothered me cause my daughter deserves to be celebrated but, they ghosted me for days then started coming over & visiting constantly referring to my daughter as my son claiming the results were false and basically pretending it’s a boy.

I had several fights with them after they refused to stop it, and my husband sided with them despite seeing how wrong and unreasonable what they were doing was. We didn’t speak for a while

Sister-In-Law called to apologize then inform me she arranged for a baby shower for me. I was so excited and happy. But when I arrived I saw blue balloons, blue cake with Father-In-Law’s name/decorations around. I was so confused I had to sit down. Sister-In-Law explained they were “still” hoping the gender results are false and it’s a boy.

I looked at my husband and he agreed with her. I lost my temper and yelled at them all calling them delusionals and telling them to stop treating my daughter like she’s unwanted and act like she doesn’t exist by throwing a party for “their imaginary grandson”. mother In Law break down crying, I took my bag and walked out immediately.

They started yelling and my husband followed me outside and started arguing about how I insulted his family, and his dads memory by acting like that. I told him to wake up and see the insanity in his family’s behavior. He said they needed time to process the fact that it’s a girl not a boy as they expected and insisted I play along and “they’ll soon get over it”.

I said absolutely not and demanded he take me home, he said no so I called an Uber and left. He was fuming he called 15 times, then texted that he won’t be coming home til I “get my a**” over and apologize for ruining everything THEY’VE DONE FOR ME and accusing them of being mentally unstable.

I haven’t responded yet he’s constantly pressuring me to get right with his family before we even talk about anything else.”

Here’s what Reddit users had to say about what happened?

This person said the woman’s family are misogynists and that she needs to get out of this situation now. 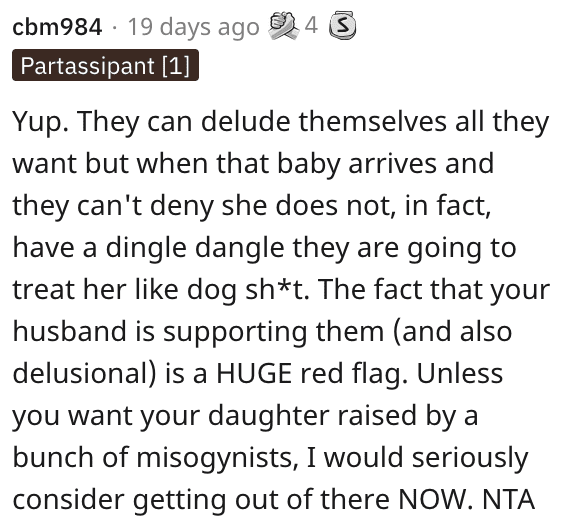 And this Reddit user said this woman is NTA and agreed that she needs to RUN. 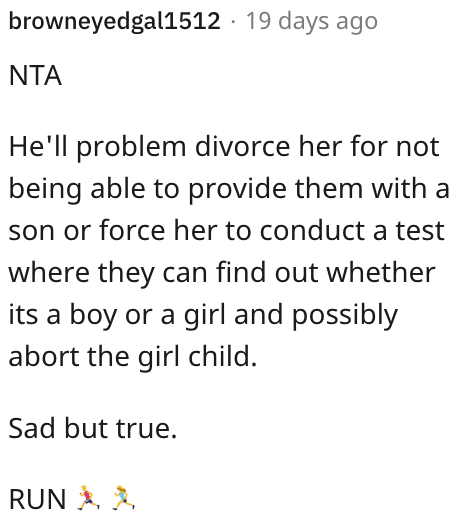 Another individual said she needs to leave because of the way her husband’s family is going to treat her. 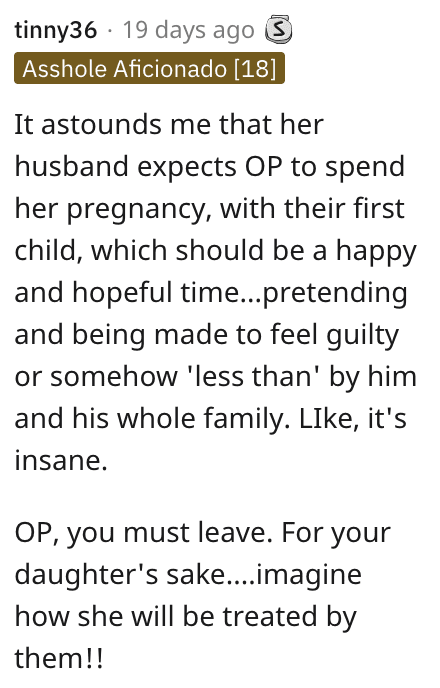 Tell us what you think about this story!