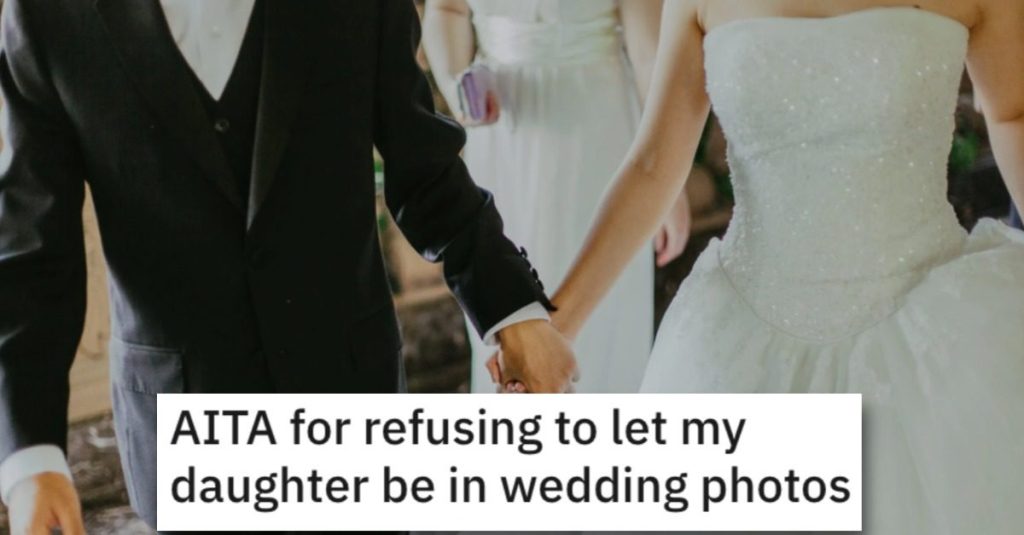 She Refuses to Let Her Daughter Be In Wedding Photos. Is She a Jerk?

Have you ever been excluded from someone’s wedding photos?

I personally have not, but I can imagine that if someone demanded I (or anyone else) not be included in the snapshots, there would have to be a good reason…

So what’s going on in this story from Reddit’s “Am I the A**hole?” page?

Read on to get all the info.

AITA for refusing to let my daughter be in wedding photos?

“I (30F) have a daughter, Lily (5F). My brother, James (32M) and his wife, Brittany (26F) got married in July. I was ‘friendly’ with Brittany for before they were dating/engaged but we weren’t friends. James and I are very close though.

A few weeks before the wedding Brittany came to my house to talk to me. She explained that her family had raised concerns about kids attending the wedding and Brittany/James have decided to make the ceremony child free but that Lily was more than welcome to come to the reception. I tell her something along the lines of ‘Ok, it’s your wedding. I love my brother so I’ll do whatever he asks of me.’

Fast forward to the rehearsal, we line up and everything is going as expected until Brittany’s 3 nieces (5F/7F/8F) walk in as a JR bridesmaids. I’m confused and slightly annoyed but whatever. After James pulls me to the side and says that Brittany was worried that Lily would ‘accidently ruin the wedding with a temper tantrum’ and that’s why they lied about the wedding be child free.

I explained to James that this really p**sed off and it hurt that they think that about my child but it’s fine. I had already arranged for my friend to watch Lily during the ceremony and then meet me for the reception. James said he understood my feelings and didn’t agree with Lily not being invited.

The day of the wedding Brittany asks where Lily is and why she wasn’t there while we got ready. I explain that she is with a friend and will be at the reception later. Brittany then says she’s going to call so Lily can be brought over for the pictures because people will ask why she’s missing in pictures and it will make her look bad. I told her she can call but my friend knows the situation and won’t come until I ask her to.

Brittany called James to have him ‘make me stop being a petty b**ch’ but he said he knew the plan and didn’t see a problem with it. She then asked what they’re supposed to tell people when they look at photos and ask where Lily is.

I said to tell them that she wasn’t invited since she has too many temper tantrums. She called me a b**ch and said I was taking things too personally. After that the wedding was awkward to say the least (there was a lot of drama within the wedding party that had nothing to do with this situation).

James texted our family group chat with a link to the wedding photos. Now extended family has been reaching out wanting to know why Lily isn’t in any pictures and I have explained the situation.

My mom is on my side but all my aunts/uncles said that I’m a petty a**hole. So AITA?”

One person said she’s NTA at all. 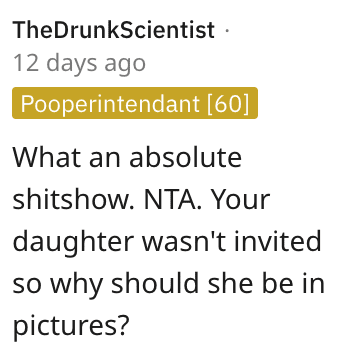 And this reader also said she’s NTA and who is in the pics is up to the bride and groom. 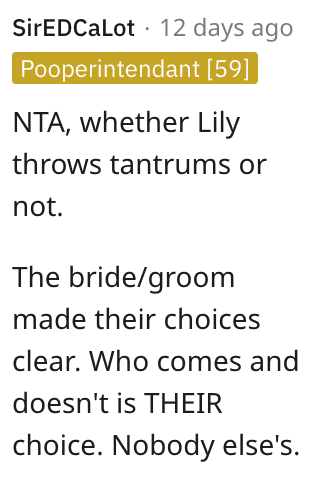 Another reader said they don’t think she did anything wrong.