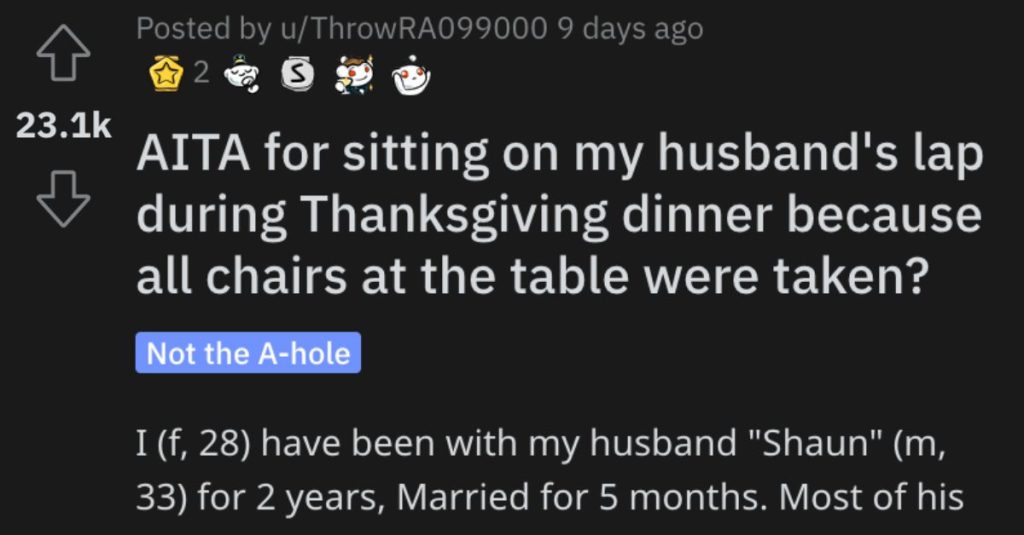 She Sat on Her Husband’s Lap During Thanksgiving Dinner. Was She Wrong?

Well, I guess if you don’t have anywhere to sit, a lap’s gonna have to do, huh?

But why would people get upset about this at a Thanksgiving dinner?

Read the story below to get all the details.

AITA for sitting on my husband’s lap during Thanksgiving dinner because all chairs at the table were taken?

“I (f, 28) have been with my husband “Shaun” (m, 33) for 2 years, Married for 5 months. Most of his family are decent people but his mom can be a little of a passive-aggressive and tends to criticize me a lot.

Shaun sees it as “her still not getting used to me being around” but IDK because she treats his ex “Julissa” good. MIL says that Julissa has been around the family for age and her past with Shaun never affected her relationship with her. Fine, I never minded her attending every holiday and being around til yesterday.

We had Thanksgiving dinner at my MIL’s house. Shaun went there before me and when I arrived it was already dinner time. Everyone was seated and I saw that all chairs were taken. I asked MIL why she didn’t save me a seat and she said “sorry” and that one of her granddaughters decided to show up last minute and the chair was taken.

I looked at her then at Julissa who was sitting next to shaun and tried to point out how I was more deserving of her chair since I’m the DIL (I know shouldn’t have said it I know..I know) MIL flatout said that Julissa is as much FAMILY as me, and that it was rude to imply otherwise.

Julissa was nodding confidently while glancing at me. I was so upset I wanted to leave but decided to just sit on my husband’s lap and act as casual as possible. I sat on his lap asking if he was okay with it (don’t worry I’m petite, he’s strong built) and started eating so casually while smiling and complimenting the food and mentioning to Shaun how warm and comfortable his lap was now and then.

The table went awkwardly silence. BIL would try to break the silence and change the subject but it somehow goes back to being awkward. MIL AND Julissa were barely eating and were staring at each other than at me eyes wide open.

Minutes later, Julissa excused herself to the bathroom and so did MIL. It was still awkward but I did my best to focus on dinner. Shaun was eating as well. Later, there was just so much tension and MIL was barely able to speak after Julissa left (early, like right after dinner).

Shaun and I went home and MIL tried calling but then called Shaun and texted me saying what I did was inappropriate and that I ruined Thanksgiving dinner and made it awkward.

She said it wasn’t her fault chairs were taken and I could’ve dragged a chair from the kitchen but acted childishly and made Julissa (and family) uncomfortable with how inappropriate I was.”

Now let’s see how people reacted to this story on Reddit.

One reader said she’s NTA and that this could have been avoided if her husband took action. 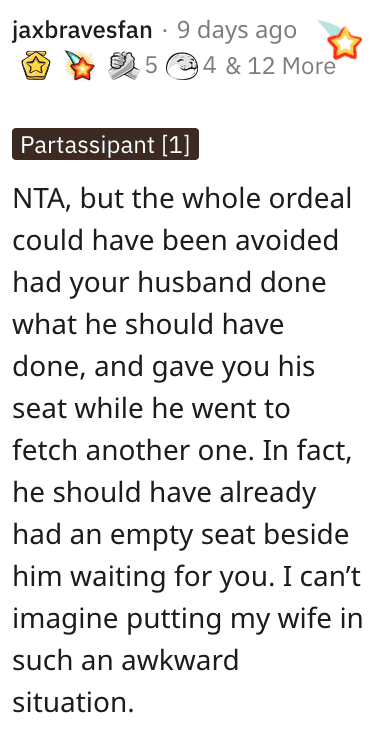 And this Reddit user said everyone is an a**hole in this story except for the woman who wrote the post. 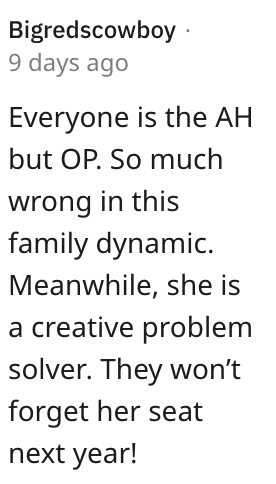 Another individual said what she did was a brilliant move and they think the mother-in-law was trying to pull some kind of stunt. 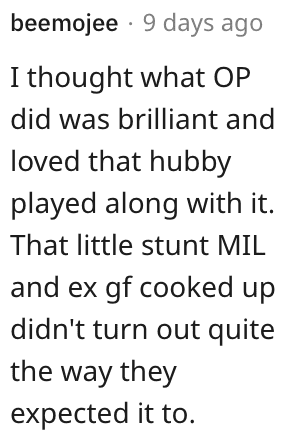