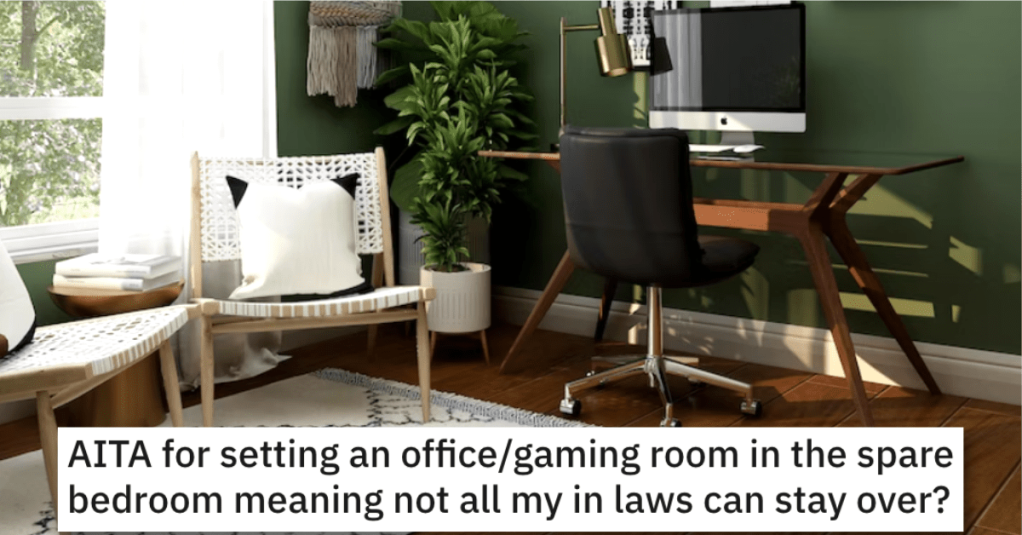 She Set up an Office So Her In-Laws Can’t Stay Over. Is She a Jerk?

Well, this sounds like a pretty good idea to me!

If you don’t want certain people staying at your house, just turn the spare bedroom into a gaming room or an office and you’ll never have to deal with folks again!

So check out this story from Reddit’s “Am I the A**hole?” page and see if you think this woman acted like a jerk.

AITA for setting an office/gaming room in the spare bedroom meaning not all my in-laws can stay over?

“I (28f) am married to Nick (30m). I work from home and earn significantly more then Nick, as he decided to pursue his education and is currently in apprenticeship.

The house where we live is my parents old 4 bedroom house which was gifted to me when I turned 18 as they had to move in with my nan due to her health back then. Now they have her house which is significantly bigger. After the sale and before meeting Nick I have done a full renovation for it to look more modern.

Currently me and Nick have joined savings for a new/better house and I have also got a decent amount that I saved myself. As the house is a gift and mortgage free, we only pay the bills, which allows us to save more. In no way or form we are struggling for money and are still able to afford holidays and such.

Now Nick came from a large family and since the lock down ended (about a year ago) they started coming to see us and stay over every other week. It got to the point where I feel cramped in my own house due to how many people there are and due to how much space they take. Sometimes they overstay their welcome making it nearly impossible for me to work or concentrate on my hobbies. I’m not mentioning the amount of cooking and tidying up when they are staying or after they left.

After they left last time I have decided I have enough, took some time off work and converted the smaller bedroom into an office/gaming room which also has a library space and a cozy sofa for me to chill. I finished soundproofing it just before this weekend.

Nick noticed my workstation has gone but haven’t asked anything. Last weekend my in laws came in again and I have told Nick some will have to book a hotel as we don’t have space. That’s when he saw my office. Him and his family got upset and they decided to stay at the hotel instead and it was godsent to be able to relax in my own house for once over the weekend. I was able to catch up with some work too.

Yesterday after they left Nick called me an a**hole for setting an office and not telling him anything. He also demanded I need to return to my previous arrangement and convert it back into the bedroom. I have reminded him I work from home and need a quiet space to work, as well as its my parents house and he has never asked me if I’m okay with his family being over so much.

Nick has been sleeping in one of the spare bedrooms and stopped talking to me as apparently I have crossed the line and an a**hole for saying that about his family.

And now it’s time to see what AskReddit users said about this story.

One person said she’s NTA at all. 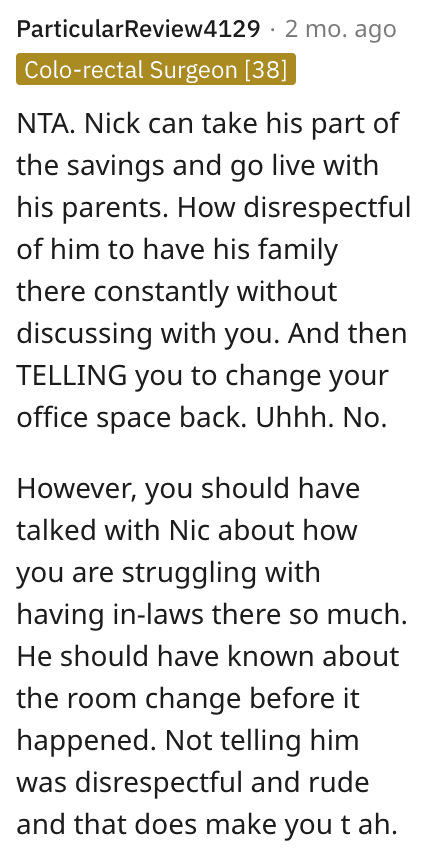 And this individual said this situation is awful and she shouldn’t let this guy take over her life. 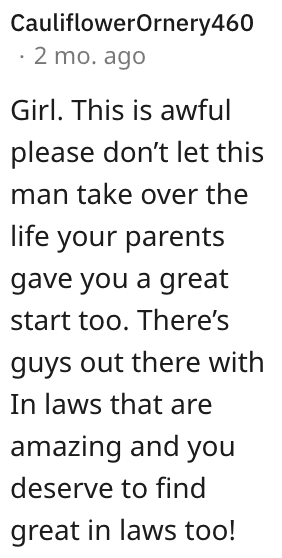 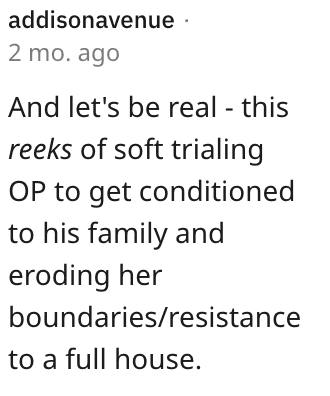