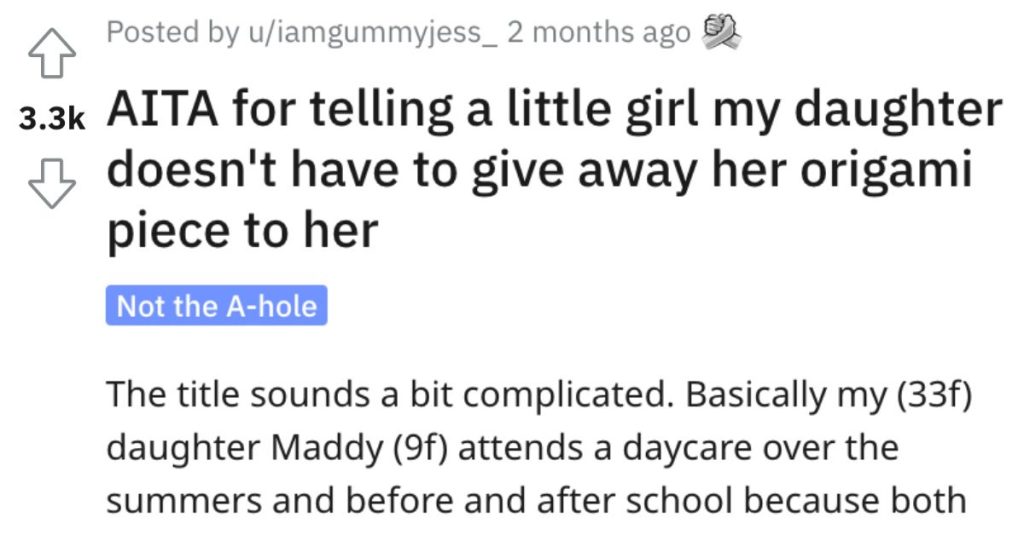 She Told a Little Girl Her Daughter Doesn’t Have to Give Her a Piece of Artwork She Made. Was She Wrong?

Well, just hang on a second and get all the details before you make up your mind, okay?

Start now and get to the bottom of this story from Reddit’s “Am I the A**hole?” page.

AITA for telling a little girl my daughter doesn’t have to give away her origami piece to her?

“The title sounds a bit complicated.

Basically my (33f) daughter Maddy (9f) attends a daycare over the summers and before and after school because both my husband and I work and don’t have anybody to watch her. My daughter is really into all different kinds of arts, one of which being origami.

On Monday at daycare she made this sort of complicated but really cool looking origami ninja star thing with the design paper I had bought her to bring in her bag so she would have something to do after school until I was able to pick her up.

As I walked in to pick her up she was standing by her cubby holding said origami piece and a little girl (we’ll call her Mia) and her mom were standing by as the assistant daycare provider was talking to her. Before I approached them this is (probably not word for word but pretty much) the conversation that took place:

Daycare provider: it would be really nice of you if you gave your piece to mia

Maddy: why? cant she make one? I can show her how.

D: this is her last day and she is not coming back.

M: i can give some of my paper to her if she wants

D: she doesn’t know how to make it and there is no time to teach her because she is leaving now. so are you gonna give it to mia?

M: well i can give her some paper but actually i made it for someone already

At this point I was a bit confused because that’s what I had walked into and didn’t have all of the information, but as soon as I walked around the cubbies and saw she had made something with her paper I was able to piece it together.

The girl and her mom were quietly talking and she was visibly upset. I told her “I’m sorry but I bought that paper for her to have something to do and since she made it it’s rightfully hers” The mother told me to mind my business and the daycare provider was obviously irritated and kind of snappy and told me that my daughter needs to learn to not be so selfish and share.

I don’t really know how to feel. I don’t think my daughter is at all in the wrong. I mean if you work hard on something and someone just feels entitled to have it because they like it, that’s rude, right?

I may be speaking from a biased viewpoint because I am her mom, but I don’t think she is selfish, she just wanted to keep what she made with her own materials. I’m just wondering if I was out of place to say anything to the other girl or if I’m possibly teaching my daughter the wrong lesson?

One reader said she’s NTA and that this was unprofessional and inappropriate. 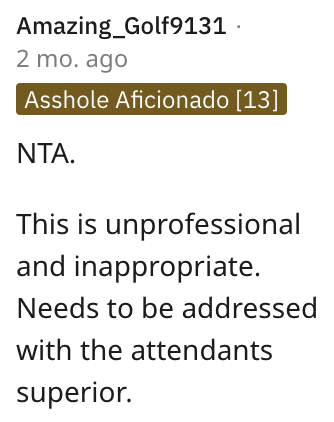 Another Reddit user said she’s NTA and she needs to make a big stink. 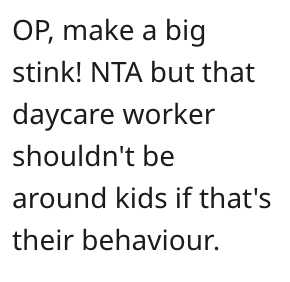 And this individual said she needs to talk to the daycare director about this. 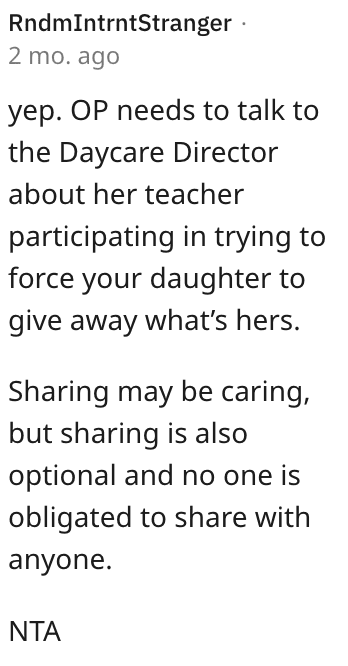