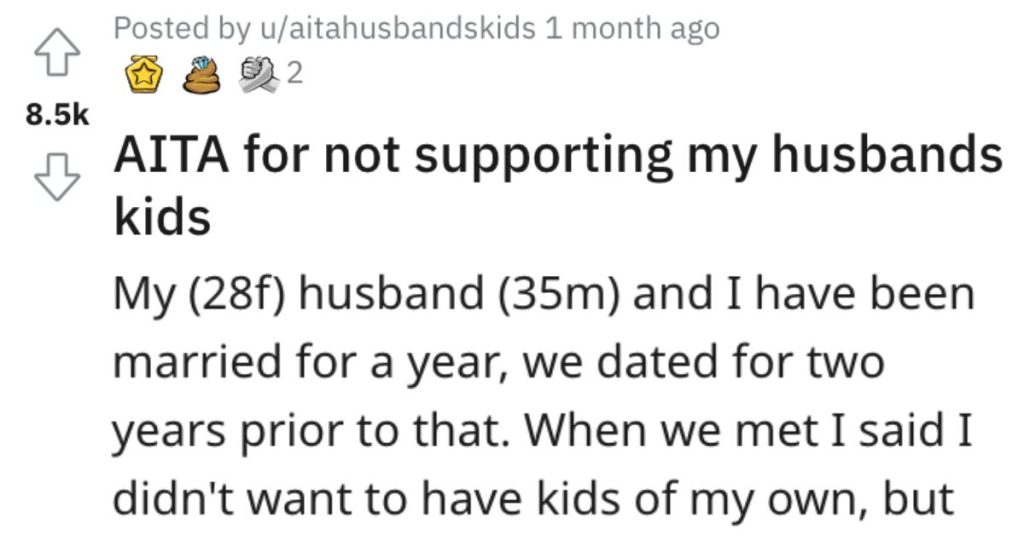 I think it takes a lot of nerve to expect someone else to foot the bills for your children, don’t you?

And that’s at the root of the problem in this story from Reddit’s “Am I the A**hole?” page.

AITA for not supporting my husband’s kids?

When we met I said I didn’t want to have kids of my own, but wouldn’t mind being in a relationship with someone who has kids. We came to the agreement that he would be solely responsible for his kids, minus the little stuff. I love my husband a lot and his kids are alright, the older two are great but the younger two are a bit much.

We have had separate finances our whole relationship, since he has kids and I don’t. When I moved into his house we agreed that I would pay 1/4 of the mortgage, since it’s a 4 bed and 3/4 rooms go to his kids.

I pay 1/5 of the utilities since there’s five of us living here, myself and then him and his four kids. I also buy my own groceries separate from them, since I’m really into fitness and I meal prep once a week it’s just the best way to go about it. This was the agreement we came to two years ago and we’ve stuck to it.

Recently I’ve gotten a new car, and I guess he’s realized my finances vary a bit more from his than they used to. I work as a travel nurse, going to wherever pays the most for about one third of the year. I make pretty good money, and I’ve saved a lot. I make around 130k a year.

Meal prepping and responsible spending has helped a lot, I don’t buy myself a lot of luxuries other than my new car. My husband works as a mechanic, and he makes a fair amount considering we live in a low COL area. around 40k a year.

Well he wants me to start setting up college funds for his kids, and he wants to have a joint account and pay our bills based off our income. Essentially he wants me to pay 2/3 of everything related to the household, and him pay 1/3.

I dont think its fair at all. He decided to have four kids, and I decided not to have any because I would rather spend my time and money on myself. He thinks its not fair that I can buy myself an expensive car while he still drives an older car that needs work.

Ultimately I asked why he agreed to the split we have now if he wasn’t okay with it, and he just changes the subject.

AITA for not wanting to support his kids?”

One person said everyone sucks in this situation and that this doesn’t even sound like a marriage.

Another individual said they don’t understand why this guy signed up for this situation. 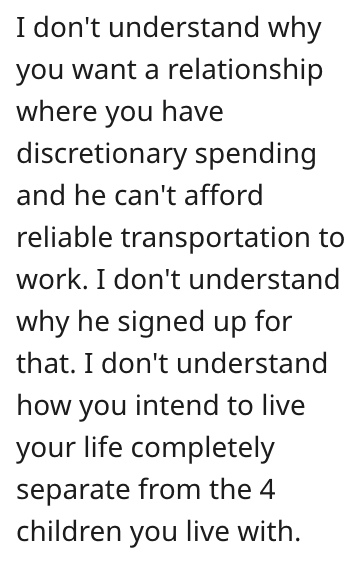 And another Reddit user said they can’t imagine watching their husband struggle like this and that everyone sucks here. 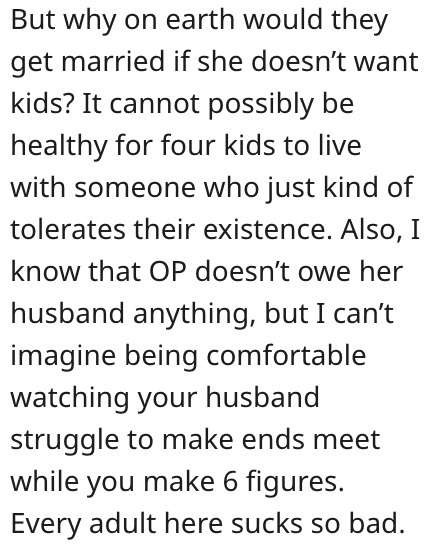