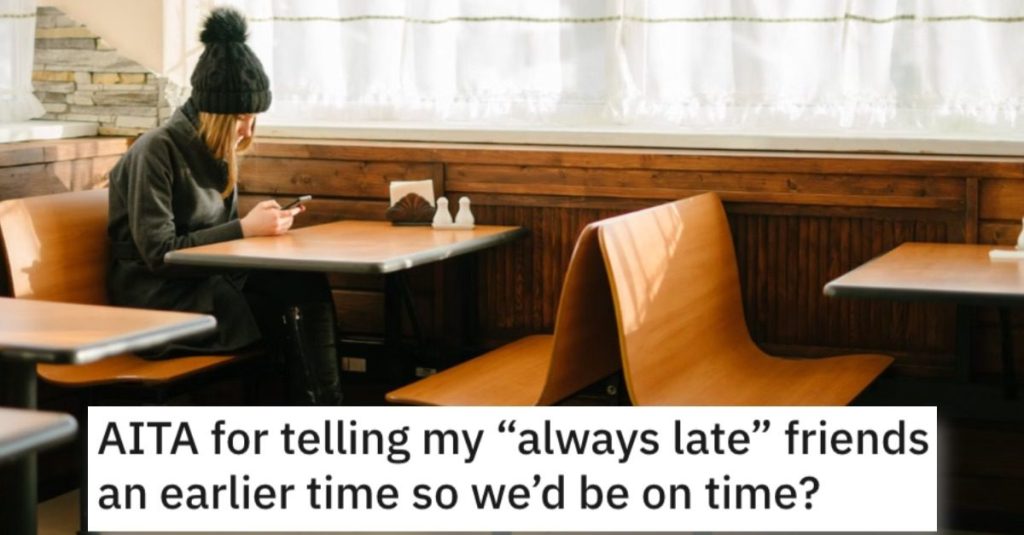 She Told Her Friend Who’s Always Late an Earlier Time to Show Up. Was She Wrong?

One of my biggest pet peeves IN LIFE is when people are late.

It drives me absolutely INSANE.

Do I need to chill out a little bit or am I right about this one?

While I try to get to the bottom of my own dilemma, check out this story and let us know if you think this woman was out of line for trying to get her friends to show up on time.

AITA for telling my “always late” friends an earlier time so we’d be on time?

“So I (32f) have been friends with this group of people (30-31-32/f) since high school. I love them all to death but Jesus Christ on a cruise ship when we plan something, they are always consecutively late.

Every time and it drives me nuts. One year they almost made us miss our flight home. And they always say they forgot the time or thought they had more and just goofed around. It has gotten to the point where I will meet them because I refuse to get caught up in the drama.

Last year I left on my own accord to the airport because they were all passed out and would not wake up. They missed checkout and had to pay for an extra day. Then they barely made it to the airport in time for their flights.

Apparently I’m “pushy” for ensuring we leave at a certain time, considering traffic, possible accidents/ delays, and even looking up shortcuts in case. Throughout the years sharing a ride with them has almost made me late to work before. Lesson learned so now I take an extra day off just in case. Our vacations themselves are fun and easy going.

So this vacation was pretty smooth up until the end. We all decided to choose a night where we would plan all of the events. Mine was Friday. It was a fairly relaxing day. I scheduled a pedi for 930am and I told them it was at 845. They showed up at 915 and were surprised we got in so quickly.

Sunday, when we were going home, I said my goodbyes, checked out of my hotel room and took my separate Uber to the airport for my 2pm flight home. I got home around 8 and turned on my phone to the equivalent to an a**ault on my group chat.

Apparently they had left late again and one of them missed their flight and they were arguing about it. I told my roomie what was going on and what I did and she said that was “rude” of me to manipulate their time like that.

She knows one of the girls and told her what I did and now all of the girls are mad at me. My Friday scheduling had absolutely nothing to do with one missing their flight.

And now let’s see what Reddit users had to say.

This person said she’s NTA and she should drop these people. 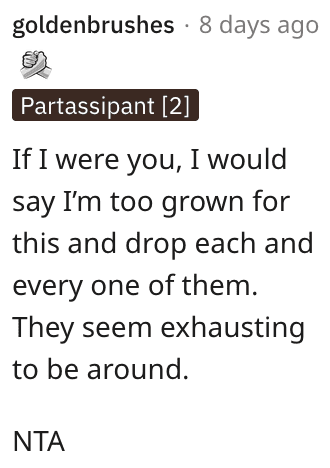 One Reddit user said she needs to either move or get rid of her roommate. 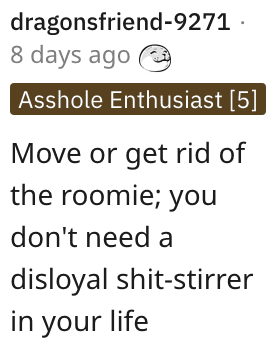 And this individual said these friends just don’t want to have any accountability for constantly being late. 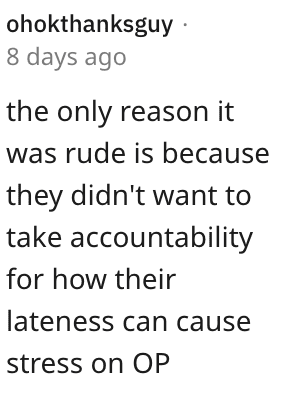