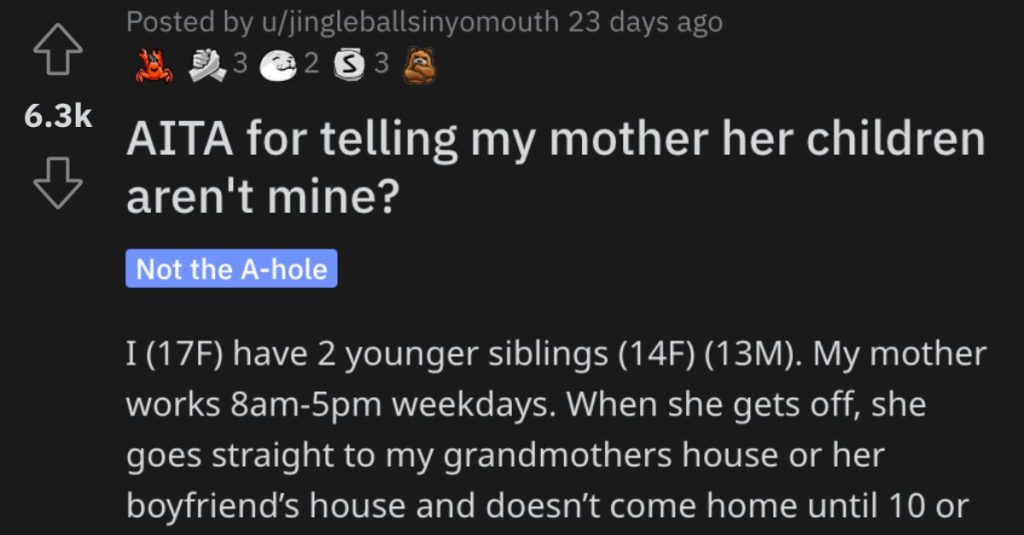 She Told Her Mom That She’s Not the Mother of Her Siblings. Did She Go Too Far?

It sounds like the mother in this story needs to start doing some parenting!

It comes to us from Reddit’s “Am I the A**hole?” Page and this teenager finally felt like she had to put her own mother in her place.

Check out what happened and see if you think she was out of line.

AITA for telling my mother her children aren’t mine?

My mother works 8am-5pm weekdays. When she gets off, she goes straight to my grandmothers house or her boyfriend’s house and doesn’t come home until 10 or 11pm. On weekends, she stays out and night. Whenever I ask to go out, which is rare, it’s a no. Everyone has to come to my home, but then she complains about me inviting everyone over.

I work a part time summer job. I get paid enough for my needs and to put money aside for my upcoming senior events. When I get paid, I put about 50-75% of my money aside and buy whatever I need. I usually have enough to last me til the next time I get paid.

My mother and I get paid the same week. She buys food with her first paycheck of the month and I buy food with my second paycheck. My mother buys mostly frozen food, junk food and canned goods. I, on the other hand, buy fruits and vegetables (sometimes snacks).

So, about three days ago my mother bought the food she usually bought and left. I put away everything and continued my night. The next night, I went downstairs to find 90% of the food my mother bought was gone. I complained to my mother and she did nothing. I started to crave teriyaki and shrimp fried rice so that’s exactly what I bought.

About 45mins later, it came and my siblings were complaining about how hungry they were. I told them to tell their mother not me. A few minutes later, my mother came into my room screaming at me for not buying my siblings dinner. I told her they were her children not mine and I don’t have to buy them anything. She told me to remember that and walked out. I shrugged my shoulders and continued to eat.

Yesterday, my mother took my siblings and I to the mall. I went on my own as usual and bought some pink crocs. My sister found me and told me that my mother said that I have to buy her something. I told her I didn’t HAVE to buy her anything because she isn’t my child. She left and told my mother.

My mom called me and just whispered yelled at me and hung up. I checked out and went to meet back up with my mom at our usual spot. After about 15 minutes, I called my mom to see where they were. She told me that she left and to find my own way home. I had my best friend take me home. When I got in, no one had said a word to me.

AITA for saying what I said?”

One person said she’s NTA and that they should make sure their mom doesn’t have access to their bank account. 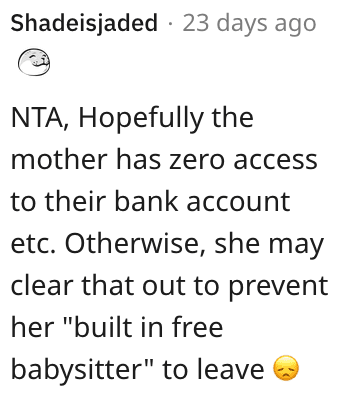 Another individual also said she’s NTA but that they should have a talk with their school counselor.

And this individual brought up a good question: check it out below. 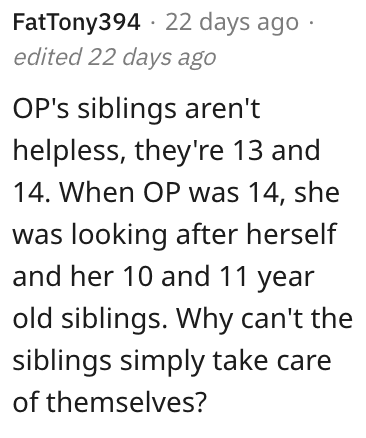