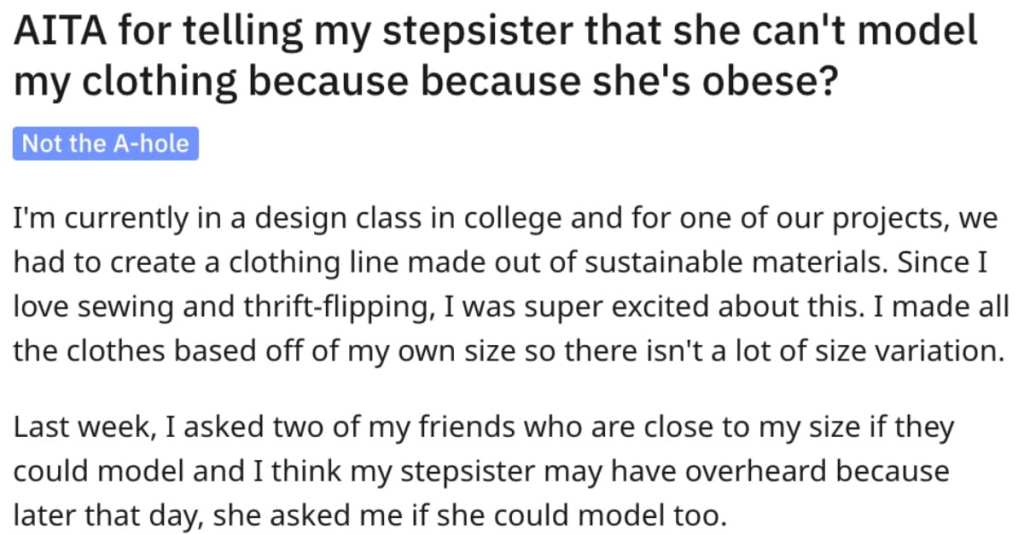 She Told Her Stepsister She Can’t Model Her Clothing Because She’s Obese. Was She a Jerk?

Anytime that weight issues are brought up amongst friends, family members, or complete strangers, you know that it’s gonna be ugly and hurtful.

And this actually sounds like a pretty sad situation to me.

A young woman who is in design school was asked by her overweight stepsister if she could model her clothes…and then it went south in a hurry.

She shared her story on Reddit’s “Am I the *sshole?” page. Read on to find out what happened.

AITA for telling my stepsister that she can’t model my clothing because because she’s obese?

“I’m currently in a design class in college and for one of our projects, we had to create a clothing line made out of sustainable materials.

Since I love sewing and thrift-flipping, I was super excited about this. I made all the clothes based off of my own size so there isn’t a lot of size variation.

Last week, I asked two of my friends who are close to my size if they could model and I think my stepsister may have overheard because later that day, she asked me if she could model too.

I wasn’t expecting this question so I stumbled and initially told her that I’d already enough models. She didn’t take this as an answer and asked if I could just let her wear one piece since she loved how they all looked. Recently, she’s been really into modeling and photography so I get why she was so adamant.

I insisted I had enough models and that I couldn’t let her, which really upset her. She ended up going to her dad crying about it and he brought the three of us together for “conflict resolvement time.” He was on her side and asked if I could just let her do one piece.

I was getting p*ssed at this point, but I continued to say no because I know her weight is a sensitive issue for her and her dad. He called me selfish and my stepsister nodded in agreement. This was my breaking point.

I said, “I’ve been saying no this whole time because I did not want to hurt her feelings. You guys wanna know the real reason? I don’t think she’ll be able to fit into any of the clothes I created. She’s obese and I designed the clothes to fit my body type. I’m sorry.”

Well, cue the waterworks. Her father just shook his head at me in disappointment and said I didn’t need to “stoop that low.” All of us are now p*ssed off.

This person said there’s no way she acted inappropriately. The clothes were for a specific body type and her stepsister clearly wasn’t in that group. 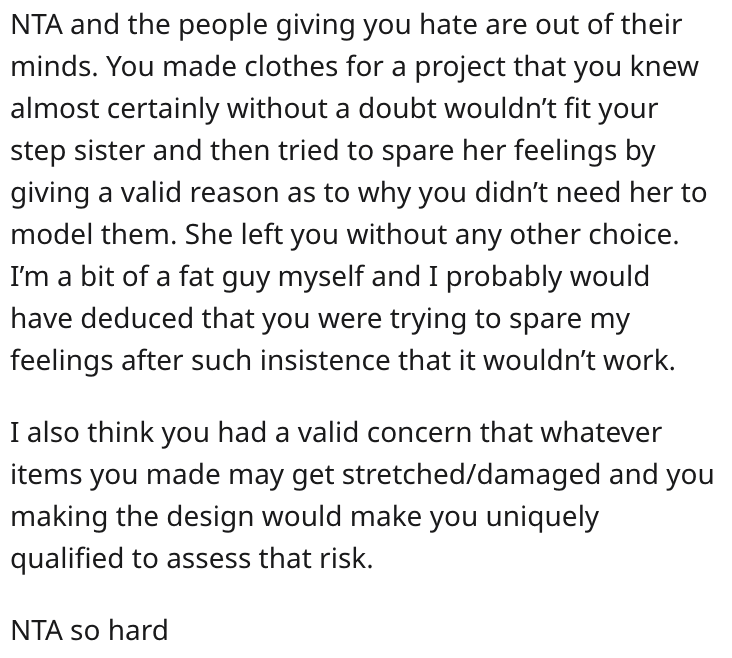 This person thought it was okay for the woman to tell her stepsister NO, but thought calling her obese was not the best idea.

A self-described “fat girl” said that the stepsister was ridiculous to even ask to model the clothes in the first place.

This person believes that the stepsister is “pulling the fat shaming card” and is being manipulative about he situation.

Lastly, this person thinks that the woman was way out of line and could have handled the situation in a much better way. In other words, she could have been polite about it. 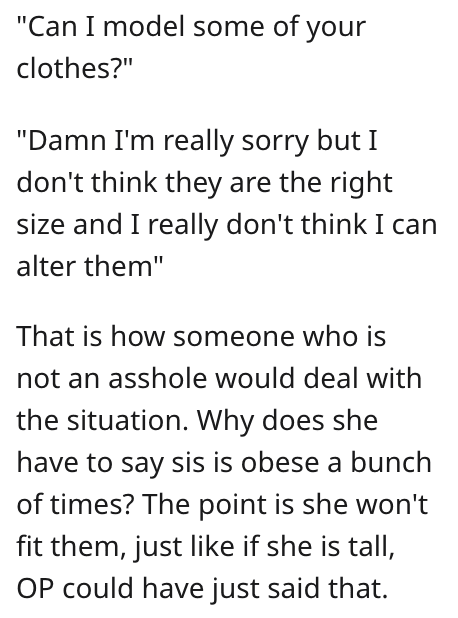 Now we want to get your take on this situation.